I had a fantastic time at the 2008 Green Festival in Washington, DC. My wonderful friend, Rawbin, picked me up last Thursday and we had a nice drive back to her place in Maryland. She lives in an almost magical setting with wooded areas, horses, a goat, chickens, dogs, and cats! KDcat will not want to leave when she visits Rawbin someday. Above is a video of Rawbin rescuing a turtle that was in the middle of the road near her home. 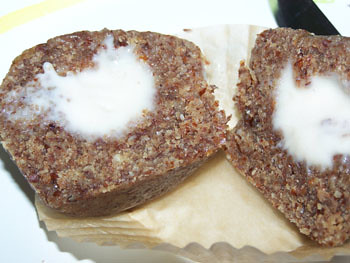 When Rawbin showed up in Pittsburgh to pick me up, she brought along a beautiful cupcake created by Shannon Marie, the famous raw food artist (that s what I call her, since her creativity when it comes to raw foods is amazing!). The cupcake was absolutely delicious! Thanks, Shannon Marie!!! (I ve written about Shannon Marie s talent in a previous post. Be sure to visit her blog, if you haven t already done so.)

Rawbin and I saw a food vendor on the side of a street in DC and the sign said, ?Eat Healthy. All Natural Snacks and Drinks. I wondered if it was false advertising, or not, so I got the video camera out and we investigated. The employee of On the Fly was very sweet and allowed us to ask him questions about the food. While none of it was fresh, they did sell some Larabars. I was impressed that much of the food was organic, but sad that none of it was fresh for a raw foodie. 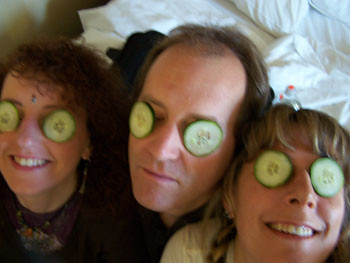 On Friday, Rawbin and I helped Jeff Rose, the President of Natural Zing, set up his booth at the Green Festival. When Rawbin, Jeff, and I get together there tends to be a lot of silly behavior and laughter. I love the two of them more than words can ever express. They lighten my heart and laughter bubbles up from the deepest areas of body and spill out all over the place. A long weekend is never enough time with friends like Rawbin and Jeff. 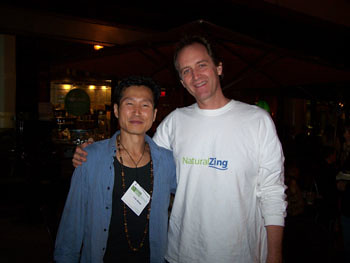 Friday evening we headed over to the Natural Zing Green Festival party that was being held at Java Green. Jeff hired a very talented musician...

...to perform for the evening. My camera didn t capture great pictures and I m sad that I didn t get any great photos of Woody. He s a fantastic musician, so be sure to check out his site and listen to some of his music ( The Sea Rolls? is my favorite song of his). The party that evening was fun. A group of us hung out on the sidewalk outside Java Green until after midnight, talking about anything and everything. Woody is brilliant and I was impressed with how much he knows about so many subjects. He s a fun person, so if you ever have a chance to hear him perform or talk with him, don t miss it! 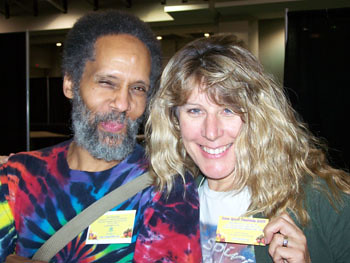 That evening at Java Green, Joe Kennedy announced that he and Rawbin were recently named as the organizers for Raw Spirit East Coast. He presented Rawbin with her ?Raw Spirit East Coast Manager? business cards. Congratulations, Rawbin! I m sure the event is going to be rewarding for you in so many ways! Another special part of that evening was meeting Jeff s wife, Helen, and their newborn baby. 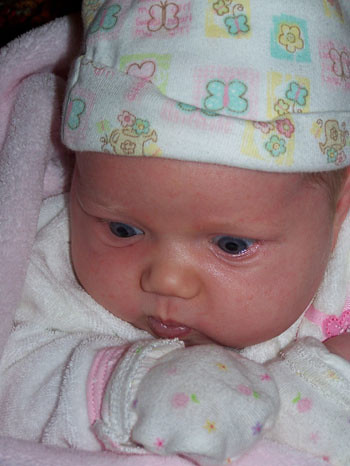 Helen has started a blog about her raw mothering, so check it out. She and Jeff are raising two beautiful, healthy Natural Zing babies! 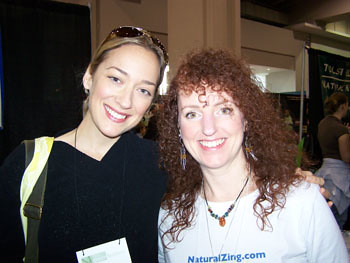 Saturday was nonstop action at the Natural Zing booth, selling all kinds of raw food supplies. I was surprised by how many people attending the festival already know about raw foods. Many are loyal customers of Natural Zing and it was nice meeting so many of them! Kris Carr, of Crazy Sexy Cancer, stopped by the booth. 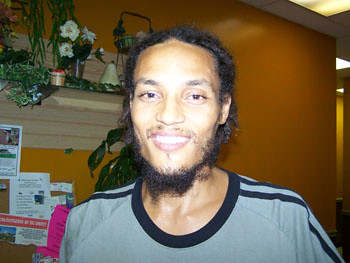 That evening we visited a fantastic raw food restaurant that I highly recommend to anyone who lives in the DC area. Senbeb Caf? is located at 6224 3rd St. NW in Washington, DC (202.249.0917) and is worth a trip if you are close enough to get there. The food was the best raw food I ve ever tasted! The beautifully vibrant chef, Khepra, created an amazing pizza, kale salad, and curried cabbage dish. Wow! It was all so flavorful and delicious! I tried to capture a video of Khepra, but our camera isn t the best quality and the sound didn t turn out very well. 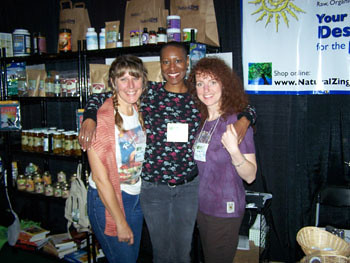 Sunday I met with my best friends, Mamta, Mohtarama, and Deborah for the afternoon. They live in the DC area and came to pick me up for the afternoon. I love them dearly and cherish the time we are together. I didn't capture any photos of them, since we were so busy talking and having a nice time together! Later that afternoon I returned to the festival and the fun continued with raw foodies hanging out at the Natural Zing booth. BlaqBerry showed up with her lovely husband and they did some shopping amidst talking. At the end of the day we packed up the Natural Zing booth, hung around a bit at the convention center snacking on some food Jeff left on the table, and then hung out some more before saying goodbye. It s always a fun time being around fellow raw foodies. Be sure to attend as many raw community gatherings as possible, so you can experience a similar joy in your life!

Sunday evening I stayed at Rawbin s home again. We walked in the woods a bit with her animals and then filmed an upcoming episode of Know Your Food! The sound quality wasn t great, but we had fun filming it and I think it s pretty entertaining. Rawbin brings a lot of humor to the show! Stay tuned to view the episode in the near future!

I ll leave you with a picture of Rawbin, captured on film when she s on a secret mission. 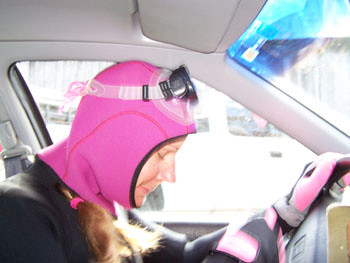 I'm so glad you liked the cupcake. I'm amazed that it stretched enough for four people to taste.

Sorry I missed you on Sunday, but I'm sure we'll meet someday. I wish I could've been there all weekend. It looks like you had a blast. I love that pic of you, Jeff and Rawbin with the cucumbers, and I'm slightly jealous that you got to meet Trinity. She's so cute :-)

I almost cried when I read this because it reminded me of all the love and adventures of RSF :) Oh to be a fly on the wall when you, rawbin and jeff are together. ..So many wonderful people on your weekend. You are blessed. I love your pic with Kris Carr. I'd love to have a t-shirt that say Kris Carr is my homegirl- that girl knows how to motivate and encourage...she's the one who without knowing it, persuaded me to try a green juice (now i am hooked!)

PS Hmmm I'm thinking I'd vote to have a Raw Spirit South too....

Wow that looks like a very fun trip. And I love seeing Rawbin's animals, especially the horses. That's so cool.
XOXOXOXOX

It's always so great to see such a positive group of people. I have just begun my raw journey and am struggling a bit..so uplifting information is always welcome here!

Love your post and the pictures are super great! They made me smile for sure!

So glad you got a picture of Kris...her and Corrine came to the Java Green booth, and I totally forgot to get a pic with her. Your smiles are infectious!

Isn't Khepra's food great? Did you have to call Senbeb ahead of time to get your order? I was starting to worry if he was still there or not!

Hope to see you in the DC area again soon! Let me know!

oh that poor taco guy, he never stood a chance against two raw hotties!
love that video.. so glad you guys had a great time!
deb xoxoxo

Thanks for sharing your amazing "raw journey" and meetup with all your friends... lots of love there, for sure.

Yes, I'm sure we'll meet someday. Soon, I hope! :-) We did have a fabulous time...Rawbin always brings the fun with her, doesn't she !

I'm wondering if you are over at Natural Zing right now for the Thanksgiving Feast ! I wish I could be there with everyone!

Aww....I know what you mean about the pics reminding you of RSF. That was such a fabulous time to be with everyone. Someday I hope there will be communities like that all over the place, where we never have to leave!

I miss you, too! I hope you are having a lovely Thanksgiving!

Just know that you are never alone! Join some of the raw communities, if you haven't already done so, and make some raw friends! There's no need to struggle--we'll all help you!

I was laughing so hard. Having fun with raw friends is AWESOME! I'm looking forward to having fun with you and Heidi sometime in the near future!

Lots of love to you, Sam!

I'm glad the pictures made you smile! It was a fun weekend. :-)

Yes, Khepra's food is the most tasty raw food I've ever had! We called ahead of time and he stayed open--we called at the time he normally closed. Since we had the President of Natural Zing with us, we were special people and he held the cafe open for us! LOL

I'll definitely be in DC again sometime in the near future. Just keep watching my blog and you'll see announcements for some fun things coming up!

*Giggles* It was a fun weekend. It will be fun for all of us to get together in a larger group, like we were at RSF, sometime soon!

Lots of love to you, Debbie! I hope you're having a fantastic Thanksgiving!

That will be a great day!