Some Photos This Week, Part 1 of 4 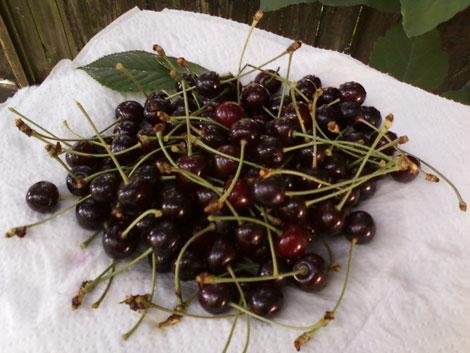 We're extremely busy this week with some home projects, so we figured we'd simply share a few interesting photos each day. Here's today's -- a big plate of freshly picked cherries from our yard! ?These are smaller cherries than you'll find in stores. We believe they're sour cherries, which is a very healthy variety, even though they're not as tasty as Bing's or Ranier's. ?They're reportedly good for pies, though. I've eaten tons of them so far; ?they're at their peak at the moment here.

I tell you... the dangerous thing about cherries is something you'll only discover when you're out there on a ladder, standing on that tip-top rung (which clearly states: "Do NOT stand on this rung!"), and you're reaching higher and higher for that next bunch of nature's goodness. Even in this situation, you find yourself thinking: "If I could just reach a *little bit* higher!" ?Sooner or later, you have to realize that some cherries are there for the birds, squirrels, and raccoons.

1. Cherries look fantastic. 2. Please do not stand on that rung.