Is Moderation the Key to Raw? 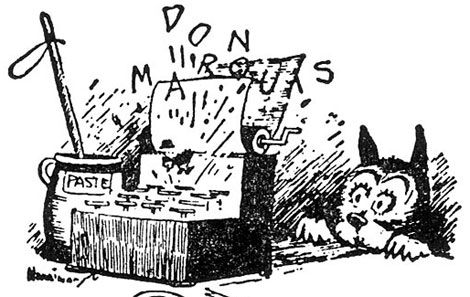 Jim here... I'd like to quote a poem today. It's called "the lesson of the moth" by Don Marquis. It's from his "archy and mehitabel" series, published in the 1920s. If you're unfamiliar with the series, archie is a cockroach who types poems (in all lowercase, without punctuation) by jumping onto the keys of a typewriter. Here's the text:

i was talking to a moth

he was trying to break into

and fry himself on the wires

why do you fellows

pull this stunt i asked him

because it is the conventional

thing for moths or why

if that had been an uncovered

candle instead of an electric

light bulb you would

now be a small unsightly cinder

have you no sense

plenty of it he answered

but at times we get tired

we get bored with the routine

and we know that if we get

too close it will kill us

but what does that matter

it is better to be happy

and be burned up with beauty

than to live a long time

and be bored all the while

so we wad all our life up

into one little roll

and then we shoot the roll

that is what life is for

it is better to be a part of beauty

for one instant and then cease to

exist than to exist forever

and never be a part of beauty

our attitude toward life

used to be before they became

too civilized to enjoy themselves

and before i could argue him

out of his philosophy

he went and immolated himself

on a patent cigar lighter

i do not agree with him

myself i would rather have

half the happiness and twice

but at the same time i wish

there was something i wanted

as badly as he wanted to fry himself

I love that poem so much, don't you ! You know, that line "half the happiness and twice the longevity" reminds me of the concept of "moderation." Buddhism's "Middle Path" comes to mind -- a doctrine of moderation, of non-extremism. Conficuanism certainly emphasizes it as well. Come to think of it, Aristotle's Golden Mean also refers to finding the middle path between extremes. We routinely see this in politics, of course. There are lefts, rights, "extremists" on both sides and "moderates." But, what does the term "moderation" mean if you're a raw foodist

Well, I think the question is a bit misleading (even if I admittedly asked it myself), as it presupposes that there is a correct answer. In fact, the answer is quite dynamic, depending on one's individual physique. For some, moderation may mean a high-raw diet with a responsible percentage of sensible cooked foods thrown in. For others, moderation may mean sticking to a strict, particular raw vegan protocol, but applying whatever rules, boundaries, and guidelines one needs to in order to feel more fulfilled. It could be that you focus on eating a wide variety of things, for example -- and thus moderation, for you, becomes a desire to enjoy as many things as you can while maintaining the boundaries you've set for yourself. (I'm speaking of moderation as it applies to raw foodists, of course. To a SAD-eater, moderation may very well mean ordering a diet Coke to accompany the Big Mac.)

So, why am I aksing this? I suppose I was just thinking about it in response to my realization lately that I've not maintained my low-fat raw vegan existence that I blogged about a few times over the past few months. So, I began thinking, quite subjectively, "I must need or want more moderation." In this case, I was referring to a balance between just general "raw vegan" and more of an 80-10-10 kind of diet. For me, at this particular moment in time, that's "moderation."

I don't like it, though. I find myself wanting to feel fulfilled lately through more fatty foods. I seem to crave nuts, for example. It's weird, though, isn't it? I read so many blogs and articles about people struggling to be 100% raw. To me, that's the easiest thing in the world to do. But, I can nonetheless relate perfectly, as it's so tough for me to maintain a lot-fat raw vegan protocol, even when I feel like such an existence would be better for me in so many ways!

So my answer, for the moment, is to attempt moderation, to adopt that Golden Mean, that Middle Path. I do very much enjoy a nice low-fat smoothie for dinner quite a lot. But, I've also lately given in to my cravings for nut dips, seed dishes, raw desserts, and other such items. All in all, I think it's a lower-fat existence than it was when I was first 100% raw. But it's also not 80-10-10. It's just somewhere in the middle.

So, that's my current state -- a personal attempt at my own personal definition of "moderation." I wouldn't yet declare it the Golden Mean of raw foodism, though. The jury's still out on that one. Perhaps my increased level of physical exercise lately is simply manifesting itself in a physical craving for more calories. Again, I'm still not sure at this point. But, that's okay; we don't always have to fully understand the things we're experiencing. It may be preferable to bring that level of consciousness to everything we do -- and I hope to get there -- but it's not always a requirement. Sometimes you just go with the flow.

So, what's your take on "moderation" Do you practice it? Is it rewarding?

Love this poem, so many phrases that resonate. In my opinion, I would not say that moderation is the key to raw. I would instead say the key to raw (as in so many things in life) is the transition. I frequently wrestle with my desire for instant gratification - in some cases this is good, as I do well working in emergency medicine. However, when making changes in my life I tend to want to dive in completely, when there are valuable and important lessons that I need to learn in the journey of transition.
I realize that my body will function optimally when I treat it optimally - which means consistent rest, exercise, and a whole food high raw diet. However, I need to put in the work of evaluation and reflection in order to get to where I want to be. I need to respect that my body and my psyche may not be ready for a complete overnight lifestyle change, and it may be counterproductive to try for an instant overhaul. I need to consider detox, emotional issues, and my current lifestyle.
To each his own, we are each unique and for some people the all-or-nothing approach works. For many, myself included, it often does not. While my diet and lifestyle is not where I want it to be yet, it is a vast improvement over where I was and I am making consistent progress towards my goal. In the meantime, I am sorting through the issues that arise along the way so that when I get to where I want to be I can be fully present - emotionally, mentally, physically.

Hi Manda! I believe that all transition is actually instant / overnight; however, some people take years to make the journey toward it and others take but a moment. I think your attitude is admirable and healthy. I read a lot about people who went from SAD to raw overnight. That wasn't for me, either. I went from actively being against raw, to gradual acceptance of it, to partially practicing it for a LONG time, and then to the realization that I wanted to be exclusively raw. But, that final moment happened instantly for me. So, yes, the journey there is important. If you're going for a whole food high raw diet, I'm confident that you'll meet with great success as you begin to feel better and better with it. -Jim