Why Does Todd Ingram Have Super Powers? 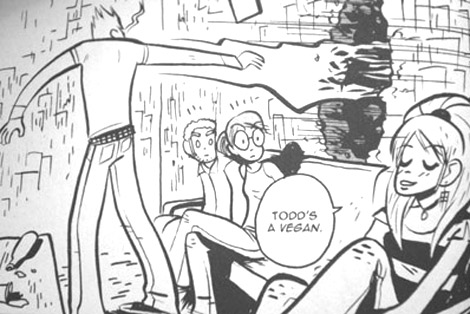 Jim here... Just a brief, fun post for the weekend... We just saw the movie Scott Pilgrim vs. the World a few days ago. ?It's a great movie, for many reasons. But, vegans will get a real kick out of one scene involving a character named Todd Ingram, who has super powers. ?Why? ?... Because he's a vegan! ?We won't spoil the scene, though. But, if you're a vegan, or know a lot of vegans, you should get a pretty good laugh from this! I think they nearly had to throw Wendi and me out of the theater, as we were laughing so hard (especially Wendi). ?Enjoy. :-)