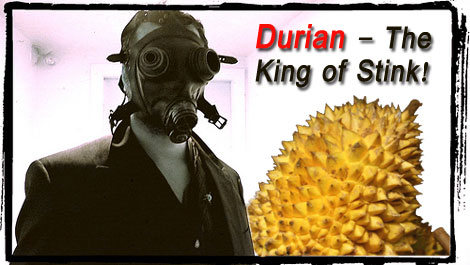 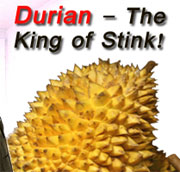 You'll see that our dog, The Jooge, was extremely curious to try this exotic fruit. She didn't seem able to determine which side of the fence she was on, however, so we think she'll be wanting to try it again in the future. Wendi says even though she didn't like it, she's open to trying it again since it wasn't completely offensive.

Have you tried a durian What do you think of them, if so? If you haven't, is it something you're willing to sample? They aren't easy to find, so it feels like a real treat when you stumble across one like we did while in Chicago -- even if you aren't a big fan.

Just so you know, the fruit has a very strong stink ... and we're not exaggerating! Debbie helped us eliminate all of the evidence of the fruit from our hotel room, but the odor was still there hours later when we returned to the room. And, guess what? The cleaning staff didn't bother to empty the large trash can at the end of the hall the day we disposed of it, so the entire floor of the hotel was quite an exotically scented place! Durian may be called the King of Fruits, but we think it's more like the King of Stink! Here's the video:

By the way, Debbie is a fascinating person! She doesn't currently have a blog to share with you, but we're hoping she'll begin one soon. Currently, she's on her way to work at the Tree of Life in Arizona. In Chicago, Debbie said something really interesting about intuitive eating. We were lucky enough to have the video camera with us to capture her unique thoughts and experiences, which we'll share with you tomorrow.

amazing. i had no idea you could open durian that easily. thanks for the lesson, guys. what was it explicitly that debbie said about intuitive eating

my hit is that when your body needs something (given it has returned to a natural state by eating raw for several years and cleaning out all the false appetites), it will be attracted to the foods that contain the food factors that you need. once you have enough of them, it will be attracted to other foods and even not like the foods that yesterday you might have loved.

when i have opened a durian, it has always been one that had been frozen and to tell you the truth i never noticed a 'bad' smell. perhaps the freezing took the odor away. ? ? but i loved the custard inside. it was a wonderful treat. now that i know how to open durian, i will buy them again. the wonderful fruits that grow in this world are so amazing.

i got my bottle of MMS and have taken two doses so far, 3 drops in all... and yes, there is a faint odor of something akin to ozone that is emanating from my body already. fascinating. i'll let you know how it goes. i figure if there are foods that we think 'stink', so will the bugs/bacteria/viruses/parasites inside us. can you imagine living in a pool of garlic or ginger or durian or O2? i suspect bugs also don't like the odors/flavors we don't like -- and they are OUT of there as soon as we drown them in what they don't like... and since those flavors help me be stronger, my body seems to love them. i have ginger in smoothies and juices daily and lots of garlic with my greens. my cancer research friend found that garlic works to kill cancer cells... i suspect so does ginger... and cayenne... and this MMS... it is smelling odd. neat -- if you like that kind of thing. :)

i am glad i rejoice in bad smells... i think garlic has saved my life. my immune system was shot long ago but my daily dose of antibiotics has kept me going. and i often will apologize to friends, 'oh, i ate a lot of garlic for supper' and they -- perhaps they are just being kind, but they usually say, 'oh, i LOVE garlic' and don't seem to shun me. ? ? my mother, on the other hand, was english and would make faces and noises even talking about onions and garlic. but then... did i tell you that the vampires got her? joking!

Stinky yet healthy. I love Durian candies. Thanks for imparting the easy way of opening it. More power to your healthy blog.