OMG What Did I Eat?! Is This Plant Normal?!

Any botanists or kale experts in our readership ? Take a look:

This "kale" is locally grown by an organic farmer. I tasted some in the store and bought a whole bunch because it was so delicious. Jim added 5 or 6 leaves to a smoothie for us a few days ago. But, today we were going to use it for kale salad. As I was washing the leaves, I saw these tiny tendril-like things sticking up. At first, I thought it was some strange kind of bug or egg, but then I noticed they were on many of the leaves and, out of some of these tendril-like things were growing MORE LEAVES! This is all happening on the flat surface of the kale leaf. I've never seen any leaf in nature that sprouted more leaves from the flat surface of a leaf. Take a closer look: 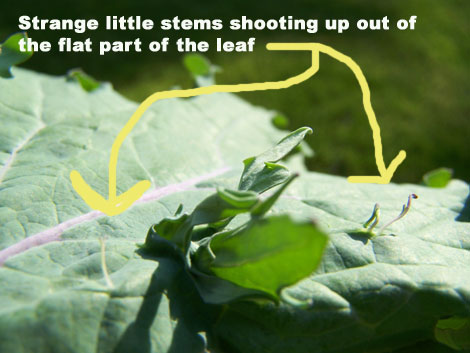 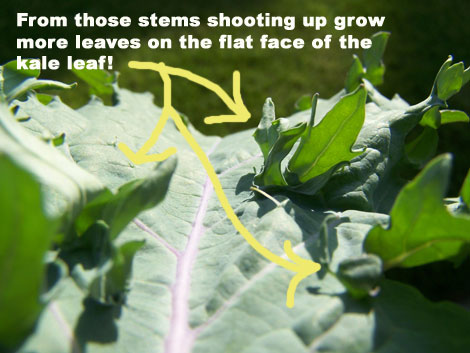 It looks completely unnatural and is freaking me out because I ate some of this stuff. Even if I didn't eat it, it still freaks me out. It's just SO UNNATURAL! Please tell me that this is a natural thing that happens to some plants, and that I'm just so sheltered that I've never been exposed to it before. Please tell me that Monsanto has not gotten so out of control that even our organic non-GMO plants are turning into Franken Foods!! I mean, I know that the GMO stuff is spreading to organic plants. But what's happenning to these kale leaves is really freaky. I sure hope someone tells me that this is a normal kind of growth, so that I can sleep well. (I AM serious that this is freaky, but I'm only joking about not being able to sleep well. I'm not really worried...just curious about this seemingly freaky thing happening with the kale.)

Hey Wendi! It looks like what we call "Red Russian Kale" and like the leaves are sprouting rootlets and new plants. Personally I've never seen anything like it before but if you look closely at the leaves sprouting they are just more kale. Maybe the farmer harvested it a little too late and it's starting to "go to seed" in a different way than we're used to seeing. I wouldn't be too freaked out by it. If it's truly organically grown it should be fine. Maybe google propagation methods of kale and see if you can find anything about it.

Yes, it's exactly like the leaves are sprouting rootlets and new plants--that's what's so freaky
about it! That just isn't normal, is it? It's so strange!

I would call in my fav expert, Mr Anthony Anderson!
Raw Model, we have a kale emergency!!!!!!!
deb xoxo

maybe the kale was tricked insomeway hormonally into thinking it was a seed cell instead and produced leaves ? ? or maybe its the kales way of evolution maybe in the future kale will reproduce this way..to ensure it remains a russion kale and not another form because kales cross pollinate ..just an idea

I've seen it many times on kale out here in Portland, Oregon, from Farmer's Market, Homegrown and Co Op purchased kale. I've been eating it for years and never really thought anything of it. It is funny looking though :)

I have no idea what was happening with that kale. I've seen it since then on kale from the same
farm (including on seedlings they are selling). I really think it's just not normal for a plant to
behave that way.

You are braver than I! Yes, it's very strange looking--very abnormal, I think. ;-)

This year is the first time I've grown kale. My Russian Red Kale is like that, too. The flowering and curly kale are normal looking. I'm having a green smoothie even as I type this and it tastes fine. I think it's just the type of kale it is.

Thanks, Stacie. I've heard others saying the same thing...they are finding it the same where they are. I still question whether it's normal, or not. I've never seen any other plant in nature do that. I do agree that it tasted good, though!