As promised, here's another question I'd like to openly address here instead of via Wendi's email system. This one also comes up from time to time, and I told this person to watch out for my two cents on this issue. So, here it is. The reader asks:

... During your transtioning to a raw food diet & the loss of so much weight, what if any exercising were you doing along the way

Okay, well first let me point out that this is a different question than the one I posed in the title of this article and in the banner graphic, above. But, the two are related. Let me tackle the reader's question first:

When Wendi first went raw, she was not actively exercising. I do believe that, from time to time, she was exercising along with some exercise videos. But, I don't believe it was to the level of what you'd call regular workouts.? (I'll let her address her specific history of exercise in another blog post when she returns.)? However, only when she went raw did her weight start to noticeably decrease.

On the other hand, during this time (before I went raw), I was running like a madman. This is back when I was on heart meds (having peaked out at 235+ pounds and with a BP and pulse rate that had me on track as a cardiac arrest patient any day), and desperately trying to get back into shape. Only, guess what ? I wasn't losing the weight. Three miles per day, and very little weight loss!

Now, let's not interpret that the wrong way. I'm not saying that exercise is bad, or unnecessary. In fact, I think it's critical in the long-term. However, what Wendi and I had in common was a basic state of non-health. Now, for many people, doing some exercise or making some basic dietary improvements could indeed lead you back to that sought-after, healthy equilibrium. For us, it did not. Her veganism was roughly as effective as my own die-hard athleticism; they both tanked. 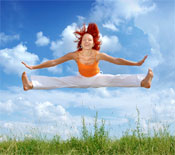 They both tanked for the same reason, though; our bodies were not genetically predisposed to being able to function properly on suboptimal nutrition. In other words, we needed to be raw in order to be healthy. I suspect that quite a lot of our readers are in the same boat. How many of you find yourself overweight or struggling with some chronic illness, even when it seems like you're eating either the same kinds of things others are, or maybe even better foods than others around you ? I bet it's a LOT of people!

When you think of it, what are the chances that anyone alive could actually discover this amazing piece of information (that by simply eating a diet high in uncooked, living foods, your health could be restored) ? Even though it's now obvious -- humans being the only species that cooks its food, and the only species as universally sick as we are! -- we still could never put two and two together until Wendi cracked the code, as it were, back in 2006.? It's so painfully obvious to us now, though, that we're dedicating our lives to spreading the word about it. So, consider yourself amazingly fortunate to know the big secret!

So, even though humans have relatively similar dietary needs and relatively similar needs for physical exercise, my subjective theory is that, while you are sick (meaning morbidly overweight or facing a chronic health challenge), exercise may not be as critical as diet.

This is a 180-degree shift in opinion from what I maintained before going raw.My former mantra was, "exercise is key"!? I thought that, if I was fat, it simply meant that I wasn't running enough. This is a common view, perpetuated by high-profile "fitness" stories of athletes fueled by 12,000 "pizza and pasta" calories per day. The message is: "What you eat doesn't really matter that much; what matters is your effort. A calorie from a potato chip is the same as a calorie from a carrot." Well, that's total BS!

Okay, so if my short-term answer is:? "No, you need to focus on healing, not so much on running 10Ks," then what is my long-term answer ? Well, I think it's critical to long-term health. I think a sick body can heal on raw foods, and then become a healthy body. And I think that healthy body naturally wants to move and run around and dance. So, in a way, mother nature has taken care of this issue herself. It's built into our genes; we just can't feel it when we're sick (and that's built into our genes, too, because when we're sick, we need to rest and to heal).

So, the ultimate question, I suppose, is not "Must we exercise " It's "How can we get ourselves into a place where we want to exercise " And the answer to that is: Eat living foods. If you do that, you'll regain your health, and you'll naturally become vibrantly active!

oh man so many thoughts on this post...I didn't excercise much during the middle of my raw experiment and my weight loss slowed...of course it could have been the discovery of coconut oil etc too. My problem with excercising is the redundance of doing something repetively...my approach is gardening...gotta figure out something during the Winter though! :D

I have Lupus and am trying to reverse it by eating mostly raw, my blood tests are getting better and better with each test. The healthier I get the more I feel like moving, I'll jump on my rebounder or just dance around my kids think I've "lost it"....I really feel like I want to move my body, almost like a little kid!

Jim, I think it's true what you said. I blew away most of my 80 excess pounds by just going raw, and kind of exercising on and off. I was exercising quite full-on for the past few months, but just recently took a hiatus mostly due to time constraints. Over the past week or so though, I noticed I am reorganizing my priorities so that I can still get my exercise in, as well as most everything else done.

I also recently made it through the audiobook of Born to Run (which I listened to while commuting to work), and I must say that really makes me want to get out there and run again. I recommend you give it a read if you haven't already, as it's a pretty interesting book. Heck, they even mention chia seeds as a great energy food, and more generally that people with plant-based diets seem to make the best runners!

Well, there's always greenhouses. Are those allowed on your rented plots? I'm sure you could keep greens going year-round! :-)

Thanks for supplying that question -- and the others, too! :-)

That's super news! I hope you'll add those blogs to the All Raw Directory, btw. From time to time people write in about Lupus, and it would be nice to tell them to search for you on the ARD! Have you posted any scientific pieces charting your progress (scans, bloodwork, etc.)? Thanks! :-)

I SO love to run... Haven't done so in quite a while, mostly (as you said) from time constraints. When I leave my job and am a full-time free agent, I'll be running again for sure. I view it as much more than physical exercise -- I really feel the positive effects in other ways as well.

I have posted my blog links on your list of blogs. Please feel free to have people contact me or look at my blog for information on healing Lupus naturally. I have blood work that shows that I am healing, my cholesterol,inflammation is way down and I am almost symptom free...but as of June2009 I still have Lupus markers...I will be tested again soon if my rheumotologist agrees, and I WILL shout it to the world when my blood tests say I am FREE from Lupus!
Toni