Is Your Dehydrator Cooking Your Raw Food?

Those consuming a raw food diet sometimes use a dehydrator to prepare raw food dishes. They do this at low temperatures, below the point of actually cooking the foods, to intensify flavors, reduce the amount of moisture in the dish, and sometimes to take the chill off something they'd rather serve a bit warmer than straight out of the refrigerator. There is a practice that we've seen, however, that is actually cooking the very foods were taking such great measures to consume raw! Let me share an experience I had when I first started eating raw foods, that will help explain how some of us may be cooking our foods by mistake.

In the beginning of eating raw foods, my entire family loved the Vegetable Stir-Dont-Fry I used to make (you can find that recipe in the free eBook you downloaded when you first visited our site). One day I created a double recipe so we could eat more the next day, without going through the process of preparing it again fresh. The following day I took the bowl of Stir-Dont-Fry out of the refrigerator and put it into the dehydrator to take the chill off. It wasn't warming up fast enough on such a low temperature, so I thought I'd just cover the dish a little bit to trap in some of the heat that seemed to leave each time I checked the dish and stirred it around. So, I took a plate and placed it on top of the bowl with about an inch, or two, opening. 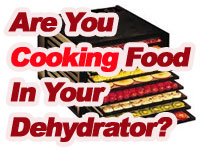 Something happened to take my mind off the warming dish in the dehydrator and I didn't come back to it for quite a while. When I did, I was surprised that, as I reached in to pull out the bowl to stir up the contents, the bowl was quite hot. The plate had slid over the bowl and it was completely covered. As I walked with the dish to the kitchen counter, I have to admit I was a little happy at the idea of the raw food being so warm. I knew the temperature must have come close to being considered cooked because of how warm the bowl was, but I still figured since it was in the dehydrator on a low temperature it was still considered a raw food.

Well, I didnt make it all the way over to the kitchen counter. As I was walking, the pressure that had built up inside the bowl (because of the plate/lid completely sealing off any air) caused the bowl to shatter! It was scary and I stood there in shock. It took a bit of time to figure out what had happened. I was happy the shattered bowl, which created large shards of glass, didn't hurt me. I was sad the Stir-Dont-Fry was ruined, of course. And I was educated through that experience about what I already knew on some level -- that when you cover something up and put it near heat, pressure (and heat) will build up.

Covering foods in the dehydrator (or even putting them in an unsealed plastic baggie as many do when creating raw popcorn) may actually be cooking your food. I've witnessed many raw foodies covering their dishes with plastic and placing them in the dehydrator. There are some raw food recipes instructing that the foods be covered while in the dehydrator. And, I've visited a raw chef training school where students were using plastic wrap to cover some of the foods they were preparing.

Of course, the foods that are being covered and actually cooked in the dehydrator this way are surely considerably healthier than foods cooked in a conventional way. ;-) But, it's at least an observation that we felt deserved sharing, for anyone going to great pains to ensure the most raw state possible for their food.

Interesting observation. I almost never use plastic, and warming plastic brings its own set of issues. I have tried to just warm marinated veggies and they can dry out before they warm so I can see why someone would want to cover them.

The easy answer I always use is to use a thermometer. I have a candy thermometer that I use and have tested my dehydrator with it.

Yes! The thought of plastic, even without being heated, makes me a bit uncomfortable. I'm glad you brought up that point about the heat being an issue with the plastic, also.

Do you keep the candy thermometer in the dehydrator the entire time, or just test it every once in a while? Have you ever found the temperature is a lot different than the setting you have set on the dehydrator?

What has long puzzled me is that the Excalibur Dehydration Guide (p. 16 in mine)suggests a dehydrator setting of around 140,citing surface temperature and other variables. Under 'Enzymes and Temperature', they refer to raw food experts who support higher temps. Do you find that odd?

There's a belief by many raw foodies that in the beginning of dehydration you can keep the temperature higher because as the water is evaporating from the food it is actually keeping it cooler than the ambient air. It sounds scientifically possible, but we've never used high temperatures. I do know it's important to not have extremely wet foods in the dehydrator on a low temperature for a long time--that's asking for bacteria problems.