I like this "travelogue" format, so let's continue! Here's Wendi's comments from their adventures in San Luis Obispo, checking out the raw vibes along the CA Central Coast! 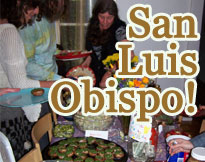 After a very active visit in the San Francisco / Berkeley area, we headed down the coast to San Luis Obispo, CA. There's a pretty active raw food meetup there and we were asked to stop in their town to give a talk to their group.

It was a nice drive south, but the sun is a bit brighter than we're used to (especially when driving long distances). When we arrived in the town, we were overcome by the beauty of the place. It's one of the most beautiful places we've seen in California, so far!

The town of San Luis Obispo is closely surrounded by moutains and it has a wonderful feeling about it. The people we met were sweet and very interested in learning about ways to not only live healthy lives, but in connecting on a deeper level with those around them.

Our host, Jonathan, was a friendly open hearted person, greeting us and all others attending the meetup with a joyful hello and embrace. It was a joy talking with him, hearing about his story of healing from a car accident, his passion for dance, how he has adopted a raw lifestyle, and is learning to bring yoga practices into his life, among other things. We met two other individuals staying with him, Randie (who was celebrating her birthday that night) and Sunshine. They have a lovely place they are sharing together, with a few other individuals we didn't meet.

Before the meetup officially began, Jonathan gave us directions to a nearby yard where we could see an avocado tree, since we told him we'd never seen one before. I took a quick video of it, but I'm not sure how well it turned out. [Note from Jim: It's ultra-brief, but, sure, why not take a look ! After all, not everyone (myself included) has ever seen an avocado tree.]

This was one of the largest raw food meetups I have attended outside of a large city. There were around 50 people attending, many who were new to the raw foods lifestyle. I shared my story and put the focus on answering questions, because I feel that's the best way for everyone to learn. Jonathan started the meetup with a group circle, where we all shared what we are grateful for--and I said I'm grateful for LOVE, and for meeting so many lovely people.

Again, San Luis Obispo is a beautiful town. There is a fragrance of flowers just about everywhere and those mountains, so closely surrounding the town, give off a very comfortable feeling to the town.

If you're in the San Luis Obispo area, you might want to check out the SLO Raw Food Meetup group. It's a great bunch of health-minded individuals who like to have fun together. [Note from Jim: You can find them through this link, which also has a few comments from some individuals who attended the meetup the evening when Wendi spoke.]

Oh! I almost forgot with all that we've been doing. As we were leaving San Luis Obispo, we turned a corner right outside of town and directly in front of us was the ocean! We had no idea we were so close to the ocean. It was beautiful and we took about five minutes to pull over and check it out.

Some notes and resources from our host!

On part 3 0f 4 where you were guests at Shive and Cemaajes home, they showed some delicious foods. I would like all the recepies shown. How can I obtain them?

Phipps has an avocado tree, I believe. I almost thought it was located near the coffee and banana trees, although I could be mistaken. I'm pretty sure they had a smaller one in the Amazon section next to a young cacao tree, as well.

Thanks for all of these updates. It sure sounds like Wendi and KDcat are having fun! This trip sure has been flying by in a hurry, that's for sure.

I know... Tough to be alliterative with a town like San Luis Obispo, though. Maybe I'll get back to that when we get to "Vegas" (leaving off the "Las" part). :-) Time Is flying by... It's been more than a month already!

LOL... yes, deb!!! However, I got SOOOO incredibly swamped at work today that it's going to have to wait until Monday!!! (Sorry!) But, what a fab way to start out the week!

That's a toughie, Suzanne. There's probably no easy way, really. You could try friending Shivie on Facebook, and asking for some basics. However, if memory serves, I think some of those were experimental. I would add that Shivie will be featured in an upcoming segment of Makin It Monday. So, stay tuned and you might get a wonderful raw food prep instructional vid from her!