Veritable "Wal Mart of Produce" Discovered in Chicago, Pineapples for $1.49!

Hey everyone!? I hope you're doing well. We started out the week with a great video from Joe, Tracey, and Heather. I thought I'd stay with the video blog format for a while, as I've been capturing some outstanding stuff here in Chicago. (We're here until Thursday.)? Well, a few of the vids are "okay," but the bulk of them are absolutely amazing, so be sure to check in every day for these great Chicago vids. (BTW, I'll dub this series, "The Chicago Raw Food Scene," although partially misleadingly so, as the videos are not always *about* Chicago, per se. Rather, we shot all of the videos *in* Chicago. So, pardon the slightly misleading banner graphic.)

Anyway, here's one I shot at a place I almost can't recall the name of. It could have been called "Farm Fresh" or something like that. I only stopped there in hopes of finding something for my dog to eat, but was absolutely blown away by their produce department. It's like "You know you're a raw foodie when ... you get excited about a produce department!" More commentary after the vid:

So, as I was saying, maybe this isn't so impressive if you live in New York or, even better, L.A. But, to someone from Pittsburgh, this kind of variety and selection -- and of course pricing -- was almost unbelievable. I mean, we have our own co-ops, our large chains, Trader Joe's, Whole Foods, etc. All of these look pretty much the same anywhere I've ever been. But THIS? Wow... a whole different league. 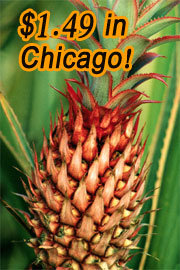 Seriously, pineapples for $1.49 !!? I think we had a special sale once in Pittsburgh where they were like $3.49 or something. And even in Pittsburgh, where the most common food-oriented question is "You want fries and cole slaw on your cheese steak," people still took advantage of the $3.49 sale. But, most of the time, they're $4.99 at the lowest. At $4.99, I ususally say, "Wow, let's grab a couple!"? But, $1.49 is absurdly cheap! And there are millions of them here at this store -- and there's no angry Black Friday-esque crowd trampling over each other to get at one!

I was just reading Jay Kordich's Facebook stream tonight. He posted that it takes two years to grow a pineapple. Honestly, I could spend two years just thinking about this and I wouldn't understand the math here. How could something that takes two years to grow sell for $1.49 ? I mean, I understand that things are cheaper in volume. But, these things still have to be planted, nurtured, harvested, packaged, sold to a middle-man, shipped, sold to a retailer, shipped again, unpacked, and repriced at a profit for the retailer. How can all of that get done at $1.49? And, if it's possible to do that at $1.49, then why are other fruits so insanely expensive? (That question is partly rhetorical, as I suspect I know some of the answer. Mostly, this is just my own astonishment showing through!)

Anyway, aside from the fact that I'll be purchasing about 50 pineapples Thursday before leaving here, I suppose it may also be showing through that we're having a good time in Chi-town. So, do stay tuned as much of what we have coming this week (and possibly into next week) is truly profound. I promise!? It's so profound that you'll be saying, "Wow, I'm SO glad I voted for Pure Jeevan as best raw food blog in that best of raw event!"

BTW, I'm also including this post under our category, "Produce Buying Tips," as I suppose one tip could be: Live in a huge city.

Have you ever thought about living in Chicago?

Bethany, it's like 10 degrees here, and it's windy!!!! Soooooooooo cold.

Another question...why are local apples $1.49 a pound and bananas that are imported 59 cents? Agribiz price supports, third world farm labor, and chemicals that the US exports but are illegal to use in the US.
Buy local, think global. Eat seasonal.

Hi, after you go back on Thursday to get your pineapples, will you post the name of the market? I go to Chicago all the time to visit my son, but I've never seen that store! Watching that video made me all jittery with excitement about the prospect of seeing so much produce in one location.

I'm pretty sure the store is:

BTW, when I went back pineapples were marked down to 99 cents!!!!! I bought 6 and had a pineapple feast.

Thanks for the information. I'm going to make sure I visit them on my next trip. 99 cent pineapples, unbelieveable!

"Buy local *organic*" is best, in my opinion. After that, I normally will buy nonlocal organic (e.g., bananas), then local nonorganic, and then (relatively rarely) nonlocal nonorganic. Adding to the complexity, there are some things I do not buy nonorganic at all (e.g., apples). And then adding to the complexity again, you have fresh vs. frozen (e.g., my preference for frozen organic strawberries over fresh nonorganics). Luckily, pineapples aren't a high-pesticide crop, so I do occasionally buy nonorganic ones -- and especially when they're 99 cents.

Also wanted to say that *seasonal* local organic is probably the ultimate!

Scratch that... Seasonal local organic is the penultimate. The ultimate is growing your own food organically -- and sharing with others!