Are You Ever Too Old for Raw Foods? 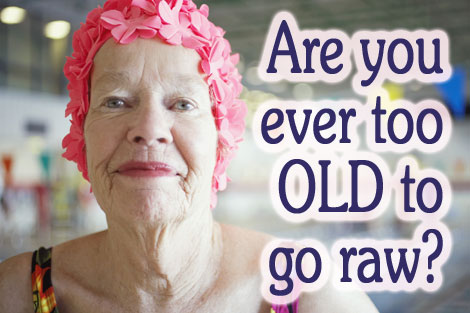 A while ago, I received an email asking whether I had any thoughts on how old or young a person needs to be in order to benefit from a raw food diet. Yes. Yes, I do have thoughts on that! Lots of thoughts! ... Here goes:

The easy answer, of course, is that people of ALL ages can (and should) benefit from raw foods. I can assert with confidence that, for most people, increasing your intake of raw fruits and vegetables will likely bring about positive changes to your health, regardless of your age, dietary habits, or current state of health. (Naturally, reducing or eliminating the "bad" things is also paramount.)

Let me tell you... As I write this, I'm mindful of my own grandfather, who is 88 years old. If you ask anyone who knows him now, they'd tell you politely that he's slipping. I wouldn't go so far as to describe him as fully senile. But he's highly forgetful, quite often confused, and fortunate to be in an assisted living facility. We've all known someone in that situation, alive but not thriving. The $64 question is: ?Can the negative aspects of aging be slowed, halted, or even reversed

Quite often over the past few years, I've entertained personal fantasies in which I would take someone of his age -- someone who has perhaps even begun deteriorating mentally -- and see if some version of a raw diet (likely one that is highly inclusive of certain juices) might "bring them back" (or, at any rate, at least slow or halt the progression of aging). 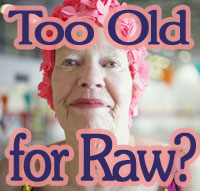 I've ebbed and flowed with respect to my opinions about the miracles available to human beings via the raw food diet. Quite often, I've let myself believe in the nearly limitless power it (the raw food diet) holds. Other times, even as I've maintained this wonderment, I've been somewhat more doubting (for example, when Wendi suffered so hard with Lyme). Yet, I've *always* respected it, and clearly still do (living on well over 90% raw foods at the moment, with the other 10% being very consciously selected healthful foods).

I don't know if I'll ever have the time, funding, or opportunity to "experiment" with the elderly. But, I hope someone does. Personally, I believe that senility and Alzheimer's ultimately relates somehow to diet. Sure, environmental factors could be involved as well. But, I believe that mental health can be extended throughout one's (long) life, and that lasting mental clarity is available to us -- and that a significant percentage of raw foods in the diet can play a key role in that clarity.

The big buzz word in the raw food world at the moment seems to be "longevity," right? At the center of it all, living a long, healthy life is among the top few issues with which we're all concerned. And, that's a damned good thing... Not dying -- or, at least, delaying the inevitable for as long as possible -- is something I'd like to know more about, too, especially if I can maintain an active lifestyle with all of my mental faculties intact! ?Personally, for example, I absolutely love the story of how health pioneer Paul Bragg supposedly died in his 90s ... while out surfing! (Unfortunately, it could very well be that this story is more legend than truth, as details of his death, including his age at the time, have never been made clear. However, the truth of that particular case interests me far less than the iconic image of a 90-something out surfing -- sucking the marrow out of life, as it were.)

Spiraling outward from the simple goal of long life, though, opinions diverge widely, ranging from advocates of raw veganism to those who recommend nearly full-on carnivorousness. Paradoxically, all advocates of all of the variants claim to have science on their side, as well as anecdotal evidence supporting their theories and, more impressively, living examples of their theories at work. Furthering the paradox, observe that most of the health gurus in the world are not doctors (and are, in fact, usually anti-traditional medicine), and yet unfailingly each said guru selectively cites scientific studies conducted by traditional medical doctors in order to make his or her case. So, we reject traditional science, and yet we use selected studies by traditional scientists in order to support our claims. ?Yes, that's a highly confusing stance at best from which to argue!

My opinion is that it's really more of a matter of what you *want* to believe rather than what can be backed up by one study or another. Health is as much an ideology as anything else, 's all I'm saying. ?Kind of like politics, really. ?Or religion. ?But, if you need a starting point in deciding who might be onto something, try this: ?If someone looks physically healthy, that's often enough to make me at least listen. (I know... "But, who do you listen to when you see healthy examples of people doing different things " ... Oui, touch ! I have no good answer, other than to suggest trying different things -- giving them good, long, fair trials -- and then deciding for yourself. After all, there is no one best diet for everyone, and only one best diet for you. This is your Quest, reader.) 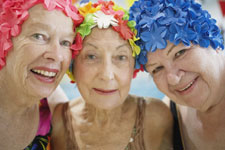 By the bye, one fact I've seen no one devote attention to is this: Humans are now at a point at which our life expectancy is unprecedentedly long. Even until the early 20th century, it was uncommon for people to live past age 45. In medieval times, Roman times, Greek times, and prehistoric times, that number averaged out to around 30 years, plus or minus. By rights, many of you (and me) would be dead already if this were just 100 years ago. So, life expectancy (in my view) has now progressed beyond the range in which evolution can be used as a convincing argument for or against any particular diet -- at least for anyone older than, say, 40.

So, it's all a living experiment. The best Wendi and I can tell you is to seek balance. That's the kind of dietary and health "advice" (which is really not advice in the legal sense of the word -- you did read our disclaimer, right ?!) we're offering here at Pure Jeevan. (To find out what we mean by that, read our posts on Nadi Balance, and our posts on live blood work.) Otherwise, I think we can all benefit from listening to those still-vibrant people in their 60s, 70s, 80s, and beyond who are clearly doing something right. For some -- such as people like Bernardo LaPallo, Dr. David Carmos, Jay Kordich, and Mimi Kirk -- it's great to read about their diets. (Here's our interview with Mimi. ?Wendi also interviewed Bernardo a few years ago, but the footage was on someone else's camera, so we've yet to post it.)

Sure, some older people may be benefiting solely from "winning the gene pool lottery," but it's also quite common to read of older people who had lost parents and siblings to early heart disease, and who one would imagine were predisposed, yet did not succumb, to such a fate as well. So, if you're a senior citizen considering adopting more raw foods into your diet, I say go for it. Talk it over with your doctor -- tell him or her that this is something you want to try. Dare to dream! It could be like the 1985 movie Cocoon, only without requiring aliens. :-)