Should We Ban the Banana? No!!!

Jim here... Thought I'd cross-post a discussion I put up on Give It To Me Raw yesterday. 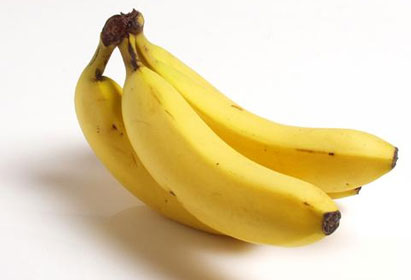 Recently, I saw an article advocating a ban on banana consumption based on the premise that, if you don't live in the tropics, you have no business eating tropical fruit. Pointing to transportation costs and the related environmental impact of such transportation, the article argues that, by eating bananas, you're contributing to the destruction of the environment.

A few counter-arguments, if I may:

First, a raw vegan's carbon footprint is laughably low, to the point of being negligible. If the world were to convert to raw/organic veganism, it would solve *numerous* issues instantaneously. For example, with no more beef/dairy industry, agricultural pollution would be a thing of the past, as would pesticide use & the toxic runoff from that. Of course, the pesticide *industry* would also vanish, along with, no doubt, many chemicals that informed beings would no longer want to use in their households. The health care industry would shrink considerably, as meat & dairy-induced diseases would become things of the past. This would mean the prescription drug companies would shrink considerably as well, along with all of the toxic crap they use to cook up their wares.

Second, the problem is NOT that we're transporting raw foods around the globe; the problem is that we're transporting too much *other* stuff around the globe. If all we humans did was grow, ship, and eat bananas, the world would be a paradise. So, instead of putting an end to shipping bananas, why not invest our time into putting an end to shipping soldiers, tanks, and bombs all over the world? I guess I'm taking the opposite approach -- suggesting that we should stop building destroyers & aircraft carriers and start building MORE banana boats.

In fact, if more people ate *more* bananas, and *increased* their intake of raw foods (be they tropical and/or local), maybe more people would reach a higher level of consciousness when it comes to so many wasteful things that we humans do -- and, as a result of this awareness, would stop creating a demand for all of the useless goods that we crave so deeply right now, thus lightening the overall carbon footprint of the global transportation industry.

Maybe I'm wrong about all of this. Maybe I, as a resident of a non-tropical climate, should feel guilty for eating a banana. But, I honestly don't think so. I read that a raw vegan driving a HUMMER would have a lower overall carbon footprint than a meat eater riding a bicycle. Is that true? Seems plausible to me. So, I'm sorry to say that I do not feel guilt while eating bananas. In fact, I'm happy to say that I do feel rather glad about them.

UPDATE:? I just wanted to add, in the spirit of this all being IMHO, that I view the above text as just one out of many possible essays representing my personal take on the larger issue of nobility -- nobility in the sense of whether something lives up to a certain moral code. Moral codes are, of course, entirely subjective, so you may disagree. But, in my world view, technology (meaning, in this case, using the Earth's natural resources and accepting the consequences) is not "the enemy." In fact, it's our friend. The true enemy is irresponsibility and waste. My point here was that, if we eliminated what I personally view as irresponsible, ignoble uses of technology, the negative effects of rampantly squandering our natural resources would dissolve.

The world, I believe, is like a human body in that it can handle a certain threshold of stress.Just as we have kidneys and livers and immune systems to eliminate toxins, the Earth has its equivalent systems. Sadly, humans have clearly pushed the Earth well beyond wherever the healthy threshold lies. One would hope that, as stewards of this magical place, we'd respect that threshold and implement measures to keep well clear of it.I believe that, if humans brought such responsibility and nobility to the forefront of their concerns for once, then we -- yes, all 6+ billion of us -- could actually live in sustainable harmony with the planet -- and yes, that would include shipping bananas around the globe for us all to enjoy.

Interesting thoughts there. I'm not giving up my 'nanners, and I'm not feeling guilty about eating them either.

Great read!
And - I think the human body *desires* a certain (healthy) level of stress, holographically therefore, so does Earth.
Yeah! for world-traveled bananas!

Thanks for the comment. I'm with you...I'm not giving up my 'nanners, either! However, I wouldn't be opposed to living in a more tropical climate where I can pick them from my own back yard, either!

I can see that...the body endures stress when a person exercises, yet that exercise usually makes the body stronger. The natural stresses the Earth endures (like floods, fires, etc.) also help make it stronger in many ways. That's an interesting point you've made, Sarah!

Oh, I plan on planting a banana tree in my backyard as soon as I can.

Very well thought out counter argument! I can say I see both sides, but I am leaning more towards yours on this!

I actually already don't eat bananas a lot because they are so genetically modified.

My kid likes bananas a lot. How can I ban eating them as banana is the only food he eats.