Working Through the Voluminous Data

Wow, what a stressful weekend! We spent pretty much the entire past two days going through the dozens and dozens of suggestions we received in response to our July 30 post concerning our move (in which we asked for help in finding the perfect new place to live). We listed every city suggested to us, as well as a number of cities we specifically wanted to consider. Then we attempted to gather data from the Internet to rank these cities. Here's a HUGE snapshot to show our progress. (I'll explain a few things below.) 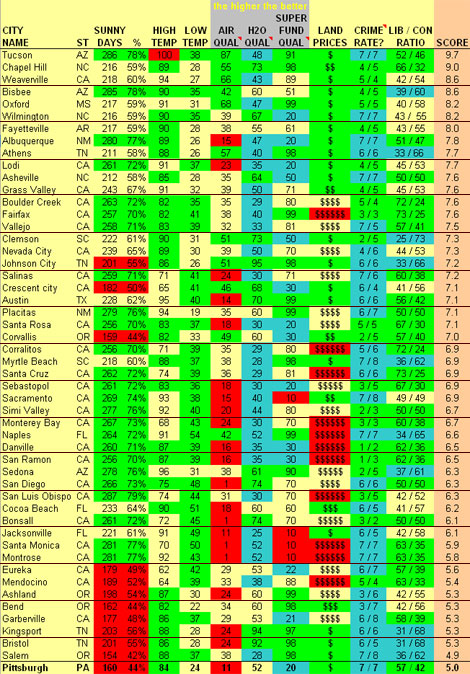 We then went through and "scored" everything based on each of these factors. We also colored in the cells to help us visualize things. Green means good, yellow means acceptable, red is a strong warning (although, in most cases, red indicates a dealbreaker -- totally eliminating that city), and blue means that the statistic may or may not be acceptable, pending further research. The result of all of this was the chart shown above. (For the purpose of simplicity, we've shown only the more relevant information here. In actuality, the spreadsheet is much more complex! For example, not only did each criterion get a rating, but each rating was also weighted according to its importance. Sun and Air Quality were weighted very high, while other factors counted less.)

After that, we went through it all again and began to eliminate many locations (even many of the higher-ranking ones) based largely on personal preferences not scored in the original criteria. For example, Tucson, Arizona.? Tucson ranked #1 on our list with a 9.7. The city gets 286 sunny days / year (outstanding), has surprisingly high air quality, good water quality, a very strong "superfund" rating (low toxicity), and is also a decent sized-city (meaning it probably has great other resources)! By all of these measures, it received the highest rating of any city we looked at. It did receive a red under "high temperature," though. In the end, as much as it seemed to fit our desires, the desert atmosphere there was simply not right for us. We needed something a bit more green.

So, we went through that process with each and every town listed, researching each one further by pulling up city web sites, visitors' guides, photo sets on Fickr, discussion boards, etc. We eliminated many based on climate (many being too humid, too urban, too expensive, etc.). Late in the day on Sunday, we'd narrowed our list down to the following: 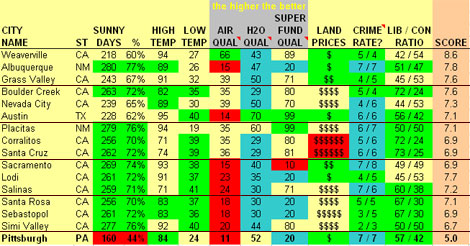 Still, nothing strikes us as perfect (although we still need to research some things on that list). For example, the top city shown, Weaverville, has only moderate sun, lies in a strongly conservative area, and is much more remote than we would like. (Remoteness may be fine for many things, but a teenager needs more of a social life and exposure to the friends and resources available in a decent sized city. So, ini all likelihood, Weaverville wil be stricken.) Albuquerque seems to look pretty good, but we're still a bit leery of moving into a less green area (green in terms of foliage, which we believe is indicative of what can be grown there).

Of course, the problem is:? If you remove every city with any red, it doesn't leave much. Also, we're still wondering if a lot of the red indicators under air quality for California cities have more to do with the wildfires there than they do with pollution. For example, here's a map showing incidences of California wildfires since 2001:

It seems like the presence of wildfires is simply a reality in California. But we're still learning about them. How long do they last? How frequent are they, really? When they happen, how long does the smoky smell linger? From how far away can you smell them ?Are there web sites and books that explain them better? These are all things we still need to understand.

In short:? We're still working on the problem!? We currently have no strong indication as to where we'll settle (although we're committed to moving away from Pittsburgh for the reasons stated). Oh, and speaking of lack of sunshine, we wanted to mention that we're very torn about many of the beautiful cities we've discovered in Oregon. If Oregon were a bit sunnier, we think it's highly likely we'd settle there.

Still working on the problem... Wish us luck!

EDITED: I've added Ashland, Oregon, back to the list. I'm starting to think air quality might be a tiny bit more important to me than the amount of sunshine. Plus, it's super important to me that we find a community where KDcat can easily meet other creative, free-thinking teens.

Wendi,
You are a motivational queen! Loving your town ratings chart... thought about doing that for years. Sun is a factor for long growing periods, but I still love what is growing up here in the Pacific NW.

Just wanted to send some love your way. Tried your MMMMMmmmmmilkshake this morning and I was in pure heaven.
Thank you for all you do!
smiles and joy,
Rain

After the rainy, gloomy start to summer we had here I wouldn't be so quick to count out the value of sunny days! It gets very depressing after a while when the sun doesn't shine. Your charts are awesome and you're really putting alot of thought into what's good for KDcat and that's so wonderful. Good luck. I'm going to be very interested in what you find as many of your criteria are things that I will look for in a place some day when I become an empty nester. :)

Love it! You guys are amazing...

I couldn't help but notice that Grass Valley and Nevada City Cal. both made it to your list. We lived there. I love it there. We are in the "Valley" of N. Cal now because of my mother, but GV/NC is where my heart is. This is not a large city area. Both cities are together, like one large city, so really shouldn't be too much difference between them. Not a lot of shopping experience, you have to like the smaller town atmosphere. It isn't too far from Sacramento for that though. It does host a nice atmosphere, health food stores and alternate heath. It has a lot of "festivals" during the year and natural crafts functions and stores. Not so much in the mountains that it gets only a touch of snow, but clear sunny days, up out of the valley heat. Ashland is a bigger town if you are looking for that, GV/NC is your more earthy smaller town. Just thought you could here from someone that is from there and would go back in a flash. They have a great radio station that covers different 'needs', 89.5 fm. Maybe you could hook up to it on the internet and get an idea of the kind of people there.

Wendi... if you guys move to Ashland, I will seriously consider going there too. Ashland has been on my mind for a while. I might go to one of the nearby cities though, as Ashland is very very expensive.

Wendi, when there are wildfires in California, sometimes, depending on the wind, we can smell the smoke here in Colorado! It's usually not very strong, but it is noticeable!

Thanks for the comment. Sorry for the delay in responding. Glad you loved the milkshake recipe!!

Our list has been narrowed down even more. We'll be sharing what we've been deciding in another few weeks. Still haven't settled on one location, yet.

Thanks, Robyn! Sorry for the delay in responding. We've narrowed the list down even more. We'll be sharing what we've been deciding in another few weeks, or so. :-)

I'm glad you are enjoying what we've been sharing.

Thanks so much for your detailed comment! Sorry for my delay in responding. Can you comment on the fires near GV/NC? How often do they happen? How long does the smoke/odor linger

Both places are still toward the top of our list and we'll most likely be visiting them if they aren't eliminated in the next few weeks as we narrow down our choices even more.

Ooh! Well, maybe we'll be seeing a lot of you, then! Ashland is still at the top of our list. We'll keep you posted!

Ooh, that is really saying a lot, Kathy! Thanks for that...it's something we have to put a lot of thought into!

p.s. sorry for the late reply.

Oh, sorry I didn't notice your comment! Last Sunday while driving to the south east corner of our valley it was so hazy the mountains were barely visible. As the sun began to set I could see in the colors that there was indeed a fire somewhere, Just minutes after that I talked with a woman, a very unhealthy one, who was actually having trouble breathing. She thought it was due to California's latest fire. Under normal conditions we have very high air quality unless there is a fire southwest of us, or the farmers are plowing, or we are under a temperature inversion during cold weather when many people are burning wood. We could really use the boost in consciousness that your presence would bring here, but we don't meet most of your criteria.

Have you considered Sedona Az?

Jim chiming in here for a moment... Actually, we did put some Arizona locations on our list. Wendi has been to Sedona, and says it's beautiful there. However, the desert environment is probably a bit too different than what we're used to. So, we haven't really considred it strongly next to, say, Northern CA and Southern OR. I've never visited Arizona, though... Would definitely love to get down there at some point and see for myself! :-)