We all know what "greens" are in general. For example, no one questions whether lettuce, kale, spinach, or chard are greens. But on the other hand, all of those items *are* also clearly green in color. With that in mind, what would you make of the following two questions I (Jim) recently pondered -- tagged as "reader questions" so they're easily found in the future by other equally inquisitive people ;-) -- that seem bizarre, but are really quite interesting?

2. Are vegetables with green skins (e.g., cukes, zucchini) considered greens? (After all, they're green!)

To begin answering them, let's first consider what it means for an item of produce to be considered a "green."

As it turns out, there could be a few ways to look at what makes a "green" a "green." One way commonly used is to consider a green to be simply any edible leaf of a plant.If that's our definition, then we could answer YES to question one (yes, purple kale is a green) and NO to question two (no, cucumber skins are not greens). 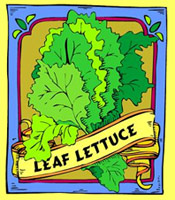 As for question 1, we would imagine that, within the plant world (in which there are literally *thousands* of edible plant leaves), there are probably hundreds of non-green leaves that are edible. (Wikipedia, alone, lists a thousand or so edible greens.)

On the other hand, it may be tough to put a firm definition on what is and what isn't "green." If a green pigment were mixed with another naturally-occurring color, then it might not look exactly green. Also, there must be endless numbers of shading possibilities -- from the vibrant yellow-green of a blade of grass to the nearly black-appearing variants of various vegetable greens.

Now, we realize at this point in the conversation that asking whether cucumbers are greens sounds bizarre, if not outright wrong! However, what that question is really asking is:

Since greens are mostly green in color, is there some nutritional commonality between leafy greens and the green skins of some vegetables? For example, do both of those things contain chlorophyll

Aha! Now, we see that there is a bit of sense to the question. As it happens, chlorophyll is nearly ubiquitous in the plant world -- and not just in the leafy greens. According to one article we read,

According to most sites we read, anything green in the plant world has chlorophyll to thank for the color (which, again, varies in intensity from lighter shades to very dark ones). Whether there are any exceptions to this rule of thumb is beyond us. (It does seem like there are always exceptions, right ) But, in *general*, at least we're now confident that, as far as our question #2 goes, we have an answer -- or, at lest what you might describe as a comment:

YES, cucumbers, zucchini, and other green vegetables do share at least one nutritional commonality with leafy greens: They all contain chlorophyll. So, if you're after more chlorophyll in your diet, you can't go wrong with those. BUT... we'll stop short of classifying these vegetables as "greens" because, well, that would be confusing to everyone. (But, it couldn't hurt to refer to them as "green vegetables" to keep this interesting distinction in mind.)

By the way, in case you're wondering, it does look like purple kale contains chlorophyll. As far as we understand, any plant that uses photosynthesis will also contain chlorophyll. ?It seems that 99.9% of the plant world follows this rule. ?Why can't we say 100%? ... Well, because, as we said, there are always exceptions. For example, here's one plant that has NO chlorophyll: 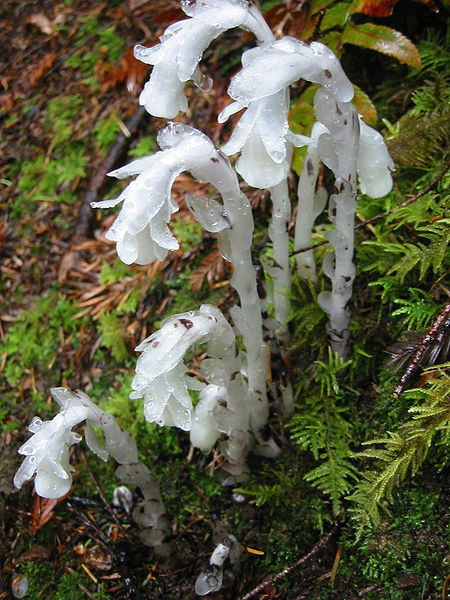 That is the "Ghost Plant"! ?No chlorophyll, no photosynthesis! We find it ...haunting, don't you !

Up tomorrow: A related discussion on whether chlorophyll is beneficial as a supplement.