Some of you who are new to raw foods may be happy to learn that there are festivals for individuals interested in the raw foods lifestyle! They are a fantastic opportunity to meet like-minded friends. For those of you who attended the Raw Spirit Festival in 2008, seeing images from that event may stir the magical memories you collected while there.

Below is part two of a two-part guest piece by Rawbin Anderson, in which she recounts her 2008 Raw Spirit Festival J.O.B. experiences of working in the kitchen. Rawbin is now the Raw Spirit Festival East Coast Manager and can be reached at Rawbin [at] rawspirit.com.

After another late night (this time at a house party hosted by Kevin and Annmarie Gianni) again I woke early. Took in another glorious morning, toured our surroundings, explored the festival, a quick dinner with Twitter friends, then back to work! This time in the Radisson kitchen. I was given the job of placing marinated fruits & veggies onto skewers. I met the third head chef Melissa Davidson. 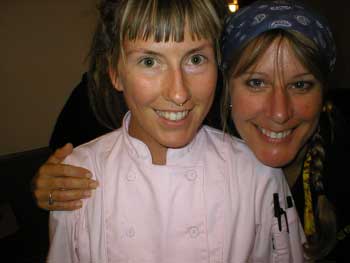 I also helped serve up the dinner plates. Later in the evening it got crazy busy, lots of last minute people needing food and we were running out! We rapidly served up dishes assembly-line style. 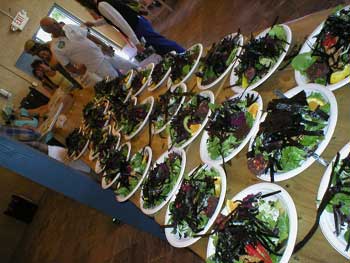 Music playing, people dancing, humming, singing, laughing, happy joyous being! It was good. Energizing! FUN!!! Suddenly, the crowd cleared. David Wolfe was speaking and NOBODY wanted to miss it. Later, when my shift ended and another crew came in, I met up with friends again for another outing!

Another very late night, yet again (Gnosis Chocolate Girl had a party at her place)! Early morning smoothies with Revvell and off to see morning speakers. Back to work my shift again. This time I was in the kitchen with Jason... 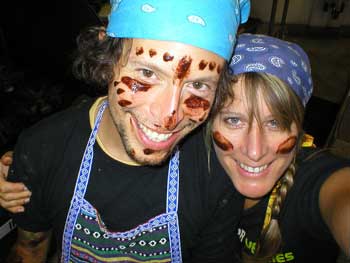 (This guy has an AMAZING voice! If anyone has a link to his site, let me know) We were making chocolate for thousands! I took a picture of the recipe taped to the wall. It's a secret. I'm unable to share... We were in the Radisson Kitchen, music playing, Jason singing, reaching into a 50 POUND bag of raw cacao! OMG! We were working the Blendtecs again. This time two of us, side by side, spilling spraying wearing rich raw cacao!!!

Take a big scoop of cacao powder, a ladle of warm coconut oil, a ladle of liquid raw cocoa butter, an undisclosed number of dates, lemon zest, a generous helping of raw agave nectar from a 5 gallon jug, blend, scoop out into big mixing tub, repeat. 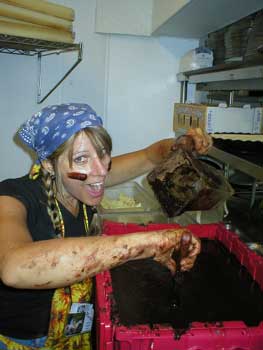 Next counter over were two other blenders working on the other half of the brownie mix...

The two mixes were to be combined later with maca powder and hemp seed and garnished with more goji berries.

After 4 hours of this I smelled REALLY good and I did NOT wash up after work. I did wipe the cacao off my face after being filmed in a hotel parking lot. A group of us met for dancing at a rave and were asked to leave at 2:15am

Each night I'd go to bed thinking nothing could top this day, but each morning I'd wake to another fabulous adventure! Up early and ready to go, I made a green smoothie and ran a cup of it across the hotel parking lot to the owner of Natural Zing. Watched some speakers, did some shopping, went in for my last shift in the kitchen. I was carving avocados 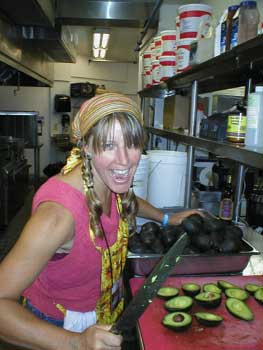 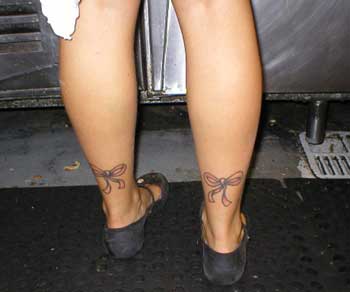 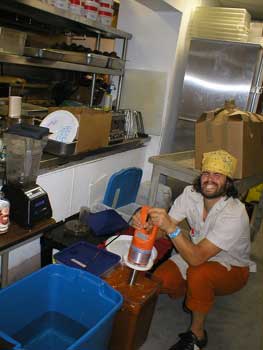 I helped serve dinner again and got to sample last nights brownies. We had that assembly line going again, with the music, laughter and good vibes all around. 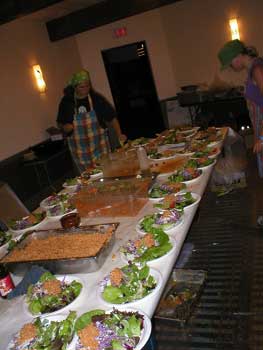 The kitchen area needed to be freed up for other chefs doing demos and prepping their own foods. Next up Karen Knowler (who we were dancing with the night before)! 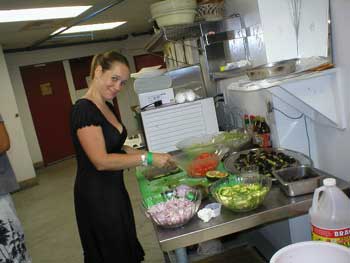 Time to move on out... finally my last kitchen shift was over. Tonight there would be concerts, another private party, and another late night!

P.S. After having such fun as a volunteer and lamenting to Happy Oasis that there were no Raw Spirit Festivals on the East Coast, we started the ball rolling on making it happen! 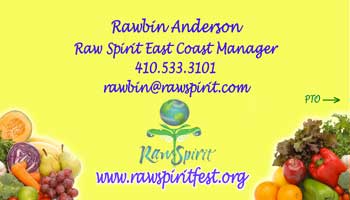 With your help, Raw Spirit can reach and enrich everyone, everywhere! I hope to meet up with you at the Raw Spirit Festivals (one, or all three)!!!

Got Raw Spirit Festival memories of your own ? Write them up, post them somewhere (blogs, photosets, videos, etc.), and make sure to share the link on the All Raw Directory's special "Raw Spirit Memories" section!

Rawbin aka Pippi! I am so excited about this years trio of RSF"S, Congrats on being such a powerful force and making the east coast a reallity.. but I hope all you east coasters still come to Santa Barbara!
I want to celebrate my 50th bday with you all and a big batch of those cacao brownies!
deb xoxoxoxo

Wendi and Jim, how I love reading your post. It is like a delightful visit with old friends. I wished I could have shared this experience with you guys! What wonderful fun! And, the brownies look divine.Although, I think the Raw Spirit Festivals on the East Coast should be in PA.

Thanks for your comment. :-) Yes, Raw Spirit Festival is exactly like a
delightful visit with old friends, even if you are meeting them for the
first time! Just about everyone is open and loving.

Even though RSF East isn't in PA, I hope you'll visit the one in the DC
area! I'm sure it will be worth the trip!

Super article, Rawbin! Best of luck on your Maryland Festival in August!

I have been trying to eat more raw food in my diet. I just can not keep up with the price.

yummy, these dishes are perfectly for camping. The recipes really looks yummy and healthy, we need to each healthy foods to maintain a healthy body,

The fact that those are only available in black really is not a negative factor in any way; rather it gives you the added advantages carhartt coats of keeping your body heat close to your body where it does the most good and deflecting the wind and cold away from you. The black nylon is specifically designed for these purposes.

I just bookmarked this for my future referance.