Obesity Explained Outside of Diet (Part 2 of 4) 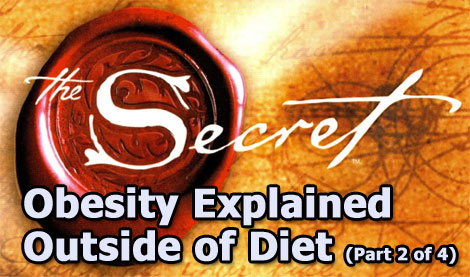 Today, we thought we'd share another non-diet-oriented explanation of obesity. It's from Rhonda Byrne, author of the international multi-media phenomenon known as "The Secret," which provides readers with in-depth philosophical explanation and instruction with respect to the Law of Attraction.

Wendi and I have The Secret on CD, and often enjoy listening to it. I think, in fairness, we both have a few legitimate criticisms about certain aspects of it (and I'll share one or two, below). However, on the whole, many of the ideas within resonate deeply for us and we find much of the underlying message profoundly uplifting and empowering -- especially (for me) much of the discussion regarding maintaining a healthy, positive, optimistic attitude and practicing gratitude. 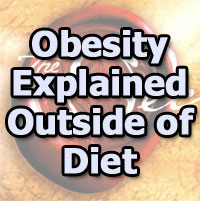 The Secret generates its share of controversy in that, according to the philosophy, whatever your reality happens to be, the root cause is you (or, more precisely, your thoughts). So, if you get into a car accident, it's because you attracted it. Similarly, if you win the lottery, it's your own doing. So, you have yourself to blame or to thank, as the case may be (according to the framework), for every detail of your life.

As you may expect, the teachings cover a wide spectrum of personal development issues so, not surprisingly, there are many passages that touch on one's physical appearance. Here's what Rhonda Byrne has to say on obesity (transcribed directly from the CD):

"The first thing to know is that, if you focus on losing weight, you will attract back having to lose more weight. So get "having to lose weight" out of your mind. It's the very reason why diets don't work. Because you are focused on losing weight, you must attract back, continually, "having to lose weight." The second thing to know is that the condition of being overweight was created through your thought to it. To put it in the most basic terms: If someone is overweight, it came from thinking fat thoughts, whether that person was aware of it or not. A person cannot think thin thoughts and be fat. It completely defies the law of attraction.

Whether people have been told they have a slow thyroid, a slow metabolism, or their body size is hereditary ... these are all disguises for thinking fat thoughts. If you accept any of these conditions as applicable to you, and you believe it, it must become your experience, and you will continue to attract being overweight. ...

The most common thought that people hold -- and I held it too -- is that food was responsible for my weight gain. That is a belief that does not serve you, and in my mind now it is complete balderdash. Food is not responsible for putting on weight. It is your *thoughts* that food is responsible for putting on weight that actually has food put on weight. Remember: Thoughts are the primary cause of everything, and the rest is effects from those thoughts. Think perfect thoughts and the result must be perfect weight. Let go of all those limiting thoughts. Food cannot cause you to put on weight unless you think it can."

Now, we realize that a personal interpretation of this, depending on one's stance on a concept like this, can range from absolute certainty of it's correctness (nodding in recognition the whole time) all the way to finding it outright offensive. ?In either case (or any in between), one shouldn't underestimate the power of the human mind -- and this is precisely why we wanted to share the concept here today.

One may debate whether our thoughts can influence things and events outside of our bodies; however, it's absolutely clear, scientifically, that our thoughts can and do influence our physical bodies. Psychology can be powerful medicine -- just think of the placebo effect (in which one can be healed without taking any medicine), of hypnotism stage shows you've seen (in which people's senses can be altered or their physical abilities limited or heightened), of the adrenaline surge you feel physically when you're excited or scared (in which your heartbeat rises and you begin to perspire, without having had to physically move at all).

Those are all powerful examples. The latter one (the adrenaline rush) deals with the physical effects of feeling acute fear. Is it so much of a stretch to consider that more subtle forms of fear -- say, "concern" -- may also bring about their own, perhaps more subtle, physical effects? It certainly seems reasonable to me.

Still, Wendi and I do often discuss our mental attitudes during our own struggles with obesity. After all, during many of Wendi's heavier years, she was living pretty much a vegan existence. And, though I weighed more than many of my friends and coworkers, I always felt as though I made relatively healthy food choices. So, why did we not manifest the bodies we wanted? ?I suppose The Secret would say that we were, consciously or not, inadvertently focusing more on what we did not want. (Under The Secret, it would be a "bad" mantra to think: "I do not want to be unhealthy." Instead, you would frame it positively: "I am thankful that I am healthy!")

Later on in the CD, Byrne goes so far as to recommend that one should not look at overweight people (presumably because doing so may trigger some "fat thoughts"). We clearly do not support that misguided view.Clearly, Byrne needs to revisit her thinking on a number of issues like this. ?(I like to think of it sometimes as her discovering a super-useful framework, and then misinterpreting it a little.) But, again, on the whole, there are quite a few noteworthy ideas within The Secret. So, in our view, it's worth considering. As with everything: ?Use what works for you and toss out the rest!

Regarding the raw food diet, though, The Secret would assert that diet does not matter; instead, the only thing that matters is that you think about that diet. Ergo, becoming healthy has nothing to do with diet or lifestyle. This begs the question: ?If that's the case, and if we think there is some validity to The Secret, then why would we spend time and energy teaching people about health or raw foods? ?Well, I have an answer for that -- and I'll offer it on Friday. :-)

Can a few of you who are 100% raw please tell me how much you spend on raw food per month.

I especially want to know from single people since it is usually more expensive when you live alone.

Can you also tell me if your quote is for an average or extravagant life style :-).

Thank you so much

Hi Renelle! Thanks for stopping by and sharing your question. We tend to see and respond to questions better if they are sent via, email...but, I'm seeing this now and responding here for you. :-)

The topic of expense and raw foods has been covered on our blog many times. Be sure to read some of the "produce buying tips" series (you'll find that in the left column), as well as this blog article:

and search through past blog entries for even more help. :-)

I hope this helps. Let us know if you still have questions.