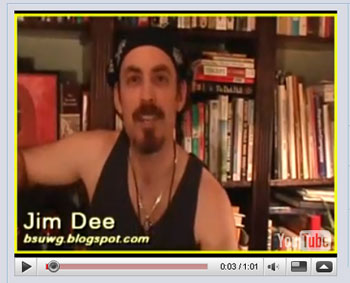 Jim here... A little over a month ago, we couldn't contain our excitement about an online contest to win the best job EVER -- living as caretaker of a tropical island in Queensland, Australia, on the Great Barrier Reef for 6 months (and being paid $100k for the task!).

The deadline has come for this and, as we promised, we BOTH applied. My video was the first to be processed. So, we posted a screenshot above, which you can click to go view it (or just click here) -- and also please vote and rate it a 5!!! (I've heard that the rating system can get a little screwy on that site -- that you need to wait for it to load and maybe mouse over the rating part first. But, a 5-star rating would really help, as would the traffic, even if you don't watch the entire video.

Stay tuned for another blog post linking to Wendi's video application!? This would, of course, postpone our rawsome RV tour by 6 months -- but we believe it would really enhance our tour in many ways as well. So, all fingers are crossed & we're relly stoked about this contest & the prospect of blogging and vlogging 6 months of sunny, raw Oz island life.

Hi Jim!
I really want to watch your video, but I can't get it to play for some reason! Sometimes the link times out, sometimes I get to the site/job page, but no video. Maybe the website is flooded with people already watching your video
I hope to see it soon!
~ Melissa

The site is getting a massive amount of traffic and it sometimes takes
forever to load the video (if it loads at all, at times). If you could
please try again later in the day, or tomorrow, we'd really appreciate it!
We promise to invite everyone to visit us there, if we win!!

Well, I've tried and tried to vote for you, Jim. Even tried to load the video on two different browsers. No luck today.

Of course I want either you or Wendi to win, so we can all live vicariously through you and share in the adventure.

Will make another attempt much later tonight.

Thanks for trying! It's frustrating that their system can't handle the
traffic. If it's meant to be, though, we'll be there on that island! And,
if that's the case, everyone is invited to come and visit us while we're
there!

Thanks, again, for trying!

Hi Jim...Your video application is brilliant and I wish you heaps of good luck. And when you start your new job on the Great Barrier Reef (howzat for being positive)you will get an opportunity to come to the mainland to meet some of the 'happy,bursting with health raw foodies that live here...of which there are so many these days.Raw food has swept Australia and there are raw food potlucks(picnics) and meetups everywhere. Best wishes Helen (Perth,Western Australia)

Sporadic performance from that site. As of 11pm 2nite, it seems to work!

In that case, vite for me twice! LOL... Thanks Caryl! -Jim

Very cool. We'll swing by Perth!!! And, we also want regional raw foodies to come visit & stay while we're there! (Yep, I'm being positive, too!) Thanks, Helen! -Jim

We also gave you a 5-star vote; can't think of a better choice for them than a Jim-Wendi-KDcat team. The passing shot of the Patrick Hillman books lead us to a very interesting web search ... such an accomplished life! You're quite the amazing folks, you should be very proud of yourselves.

I should have figured you two would be clever enough to do some searching
around. ;-) Patrick Hillman isn't exactly PG-rated stuff, just so you are
warned. LOL

Thanks, as always, for the love and support. Both of you have fueled me
positive bursts of self confidence. I'm so happy to have met you through
the work I've been doing with raw foods! It makes everything so much more
wonderful for me!

I love you both,

Yeah, we're anxiously awaiting Wendi's video URL. With 20,000 applicants, ti's nearly impossible to find your url before they email it to you... Thanks for the rating!

LOL... Yeah, I needed a creative outlet under a pseudonym for several years. Back when I was concerned about my so-called career, I didn't think it would be looked on favorably by future employers if they saw blog posts featuring "not safe for work" content, including content openly critical of my current and past employers. But, now that I'll be soon gloriously free of the whole corporate scene, I've begun transitioning the Patrick Hillman stuff back under my real name. But, it's much more than that, actually, as I've undergone some fundamental changes in recent times relating to my outlook on life. More on that as time goes by... Thanks Patty & Denny for the vote! -Jim

Hey Jim,
Loved LOVED the video! You're going to win! It was positive, exciting, enthusiastic!

Thanks Paul! I just tried to watch yours, but the site must be too busy now. I'll try again later. -Jim

Fly down and see you? Just try and stop me!!!

*Giggles* I wish a whole lot more of us would have tried out for it...so
the chances of one of us winning the island job could have been even
greater! We'll keep fingers crossed that they visit our sites and think
we're perfect for the job! :-)

They narrowed it down to fifty and sent out emails to those 50. Did you
receive an email from them? We didn't. :-(

Thanks for stopping by and leaving a comment and sharing your link.

just tried to view this video and its gone now, sigh. Can you make a new link to it now?