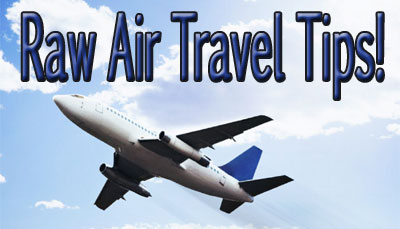 Jim here... When you're a committed raw foodie, certain activities that most other people consider routine can become somewhat difficult if you don't apply a bit of forethought and planning. Take traveling, for example -- specifically, flying.

What if you're flying out of town -- say, to the Florida Keys (wink, wink) -- and want to make sure you'll have enough to eat during the day-long trip? What if you also want to bring along some staple raw food items as well ? What if some of these are generally refridgerated ? How can you accomplish all of that?

Well, for the travel day iteslf, one simple (though not always desirable) tip would be to monomeal with something like bananas. Bananas are really great travel food because, obviously, they're "prepackaged." The downside is that they tend to get bruised if you're not careful with them -- which isn't always possible as you're rushing through security checkpoints and contorting yourself every which way along the aisle of a crowded airplane! (Other fruits such as apples and pears travel a bit better, though they're not always as filling as bananas.)

Raw prepackaged foods are another good idea, with amazing raw goodies increasingly hitting the market these days. Lara Bars, Pure Bars, kale chips, flax crackers, various raw breads, delicious dried olives cured, etc. Raw foodies have more options in this area than ever. One notable downside, of course, is that many of these are dehydrated and/or heavily nut-based. So, if you're averse to considerable intake of dried or high-fat foods, this may not be the most attractive option. (Same problem for raw nuts and seeds.)

Wendi came up with a pretty handy trick during this past trip home. We'd bought WAY too much organic produce while in Florida, and wanted to bring as much of it home as possible. We also had quite a bit of leftover raw foods that we weren't quite ready to part with prior to our flight. So, Wendi packed a carry-on bag early that morning and, by adding a large bag of ice, transformed the bag into a portable cooler.

Now, if you know airports, you know that ice is a big no-no -- it being an obvious threat to national security and all. But, the ice did a great job of keeping some veggies chilled until not too long before our flight. We simply hung out outside of the security gate for as long as we could. There, we finished off our taco salads and our bottled smoothies. When it was time to make our way through security, Wendi dumped the ice into a trash dumpster, folded the plastic bag up and tucked it back into the now very chilled bag.

The plan was to pass through security and then ask around at some of the restaurants inside for some more ice to replenish our improvised travel cooler. We ultimately decided, once we passed through security, that the contents of our cooler were cold enough to last a few hours more until we got home -- and, indeed, everything turned out fine. However, for a longer flight we probably would have replenished the ice to keep the produce chilled. While on the plane, Wendi asked for a large cup of ice just to see if that was another way to acquire ice for a future trip. The flight attendant happily gave her a cup of ice, which could have easily been dumped into the plastic bag to continue keeping the produce fresh.

One thing you simply cannot avoid, unfortunately, is the security checkpoint and the related x-ray scan of your food items. We found out that checked bags get much stronger doses of x-ray scanning, so we kept all of our food in carry-on bags during this trip. But, if it's a choice between an irradiated organic banana and a slice of artery-clogging (and irradiated) stromboli at the airport's Sbarro, I'd have to go with the banana as the healthier option. Do you have any raw air travel tips you'd like to share?

Our last air trip, Roger packed frozen grapes in his carry on backpack that kept everything chilled. The grapes were tasty too before they got to the mushy state. He usually packs frozen bottles of water for day trips, but those aren't allowed at the airports.

you can freeze bananas, peaches, berries... love frozen grapes ... peas, green beens if you like them raw are good frozen with all that you don't need ice......:)

We're getting ready to fly in a few weeks and so this is timely for me.
A suggestion someone recently made to me that I think is sheer genius is to bring your empty water bottles (I have a 40 oz kleen canteen) and fill it up with water from the water fountain on the other side of security. It won't be spring water, however it won't cost $4 for 16 oz of "Spring Water" from Coco Cola company that has been sitting in a warehouse for a year in an off gassing plastic bottle, before making it to the airport kiosk. Personally I trust the free flowing tap water far more than some of the conventional designer waters in plastic bottles.

I just came back from a trip and made raw gogi, aci, date, and almond breakfast bars. I drank a 24 oz cup of vegetable juice prior to the early am flight and was fine with the breakfast bars during the flight.

Wow excellent article Jim and comments from everyone! After my last flight from Florida to Atlanta GA for a job interview I doubt I'll be flying anymore (husband won't fly - and the latest couple of airplane news events has not reassured him either) so I guess I just read out of curiosity tonight, and to see if anything would apply to road travel. Definitely we'll be traveling with a large cooler next trip we take. And I love the Larabars, have not tried Purebars yet. thanks to all. :)

Frozen grapes = genius! Will try to remember that next time!
-Jim

True, there are a LOT of great freezable things. We usually just eat frozen *fruits* (usually because we buy many of those already frozen, unlike the prepackaged veggies which are blanched prior to freezing). Packing a lot of frozen stuff for a trip is still kindof tricky, I suppose, because you'd want to pack only about as much frozen stuff as you'd eat before it gets all slimy (e.g., with bananas). But, I really do like the grapes idea. Those have a skin, freeze well, and aren't too messy when they thaw. Never thought of freezing fresh veggies, too. Peas might be interesting! Will have to try it sometime. -Jim

Great tip on the water bottles. Surely you're right about that -- that water fountain water is at least as good as, say, an irradiated $4 Dasani. Man, what a crazy world we live in that we even have to have a conversation like this! -Jim

Wow, did you get raw/fresh gogi berries? I've only ever seen them dried. Either way, that sounds pretty good! We eat a fair amount of dates & almonds, but don't buy gogis. Nothing against them -- they're just super pricey around here (about $5-8 for what seems like a few handfuls). I suppose we could order some sometime from Natural Zing or something... Thanks, Lori! -Jim

Pure Bars are basically like Larabars, only organic & a little heavier/more compact tasting. I like the cacao ones. They're about 2x the price, though ($1.99/bar around here).

They shall be posted -- what we have, anyway. Wouldn't you know, our Sony camera decided it didn't like the 16Gb memory stick I bought for it -- and we lost a ton of vids and photos! (I was pretty upset, as that memory media is specifically identified by Sony as safe -- only it ISN'T!). Anyway, we luckily did have our other camera, and that saved the day. See, eg, the video interview we posted atop the blog today. More photos to be posted in the future. (Didn't see a single stingray, btw.)