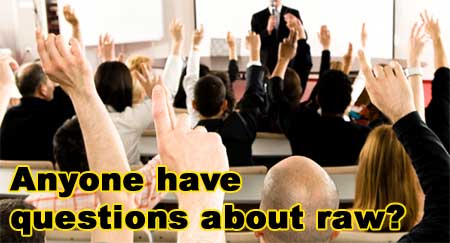 Jim here... A few months ago, I'd posted an article here on the topic of Cognitive Dissonance. This theme seems to crop up from time to time in questions people ask about the raw foods lifestyle. For example, one new raw fooder recently posted a question in a raw foods forum asking whether other raw foodies had reached a place in their lives at which things changed so much that they felt as though they were living a contradiction. Because this struck home for me, I'd like to reiterate my response, somewhat edited, below.

Going raw allows your inner radiance to emerge. When you consume raw and living foods, you begin to vibrate on a higher level than ever before and soon become aware of the contradictions in your life, many of which were formerly "pushed down" so to speak, consciously or unconsciously, by cooked foods. Without the cooked foods to keep these issues at bay, you're forced to deal with things straight away. This is part of the emotional detox many speak of -- working through those newly realized cognitive dissonances.

The end result: Major life changes are common. People change jobs, change life paths, change relationships, ideologies, spirituality, outlook, personal style, etc. This can be extremely difficult, depending on how anchored you are to any of the areas in which a change becomes vital to your happiness.

For example, Wendi and I knew we needed to move to a sunnier, cleaner location and live a simpler lifestyle. However, we own a home, have a mortgage, have too many possessions, etc. So, we had to plan an exit strategy for all of this -- declutter, purge possessions, list our home for sale, quit my unfulfilling corporate job once the home sells, buy an RV to travel and live in, and eventually settle in that sunny clean area (probably California). This has been going on for almost two years(!) and we're still in the "sell the house" phase (though it's listed and we're patiently awaiting a sale).

So, I can tell you that major changes like this -- even when you do them carefully, as we are -- can try your patience. My heart's no longer in my job, yet I need the money to keep paying the mortgage until we sell the house. So, you just have to grin and bear it sometimes. (See also my earlier thoughts on patience.)?

For some, the new clarity is the contradiction itself. In other words, a solution may not have presented itself to you yet. In these cases, I would recommend putting thought now into changes you think you might like to make, and then try to chart at least a rough course to get to that space. Maybe do a vision board or something that spans several years. That way, when it's finally time to transition, you'll have been working toward that goal for a while and perhaps the change will be easier on you.

At a minimum, consider some of the things I said about surrounding yourself with things that root or anchor you to where you're at now (possessions, loans/financial obligations, etc.). You'll be glad you did when your personal mission becomes clear -- because, I can guarantee you that your personal mission will not be to accumuate extraneous possessions and massive debt!

I wish you had mentioned more about the cotradictions in your lif. It is a new idea to me and I am attracted to it. But only so far as to what it means. Sorry to be so slow to catch on.
Thank you DOUG

Thanks for reading and commenting, Doug. I'll let Jim know that you'd like
some further information about this post of his. ;-)

Sure... when I say "contradictions," I'm describing just one particular aspect of the phenomenon of raw foods bringing you clarity about important components of your life. This is something that, in my experience, develops over time as people progress down a raw path.

This clarity may not *always* be contradictory in nature, of course. For example, you might simply gain a newfound appreciation for something already in your life. If you enjoy painting, for example, you may just realize (as though for the first time) that you *absolutely love* painting -- that this brings you joy, and that you're called to make it something you do much more often.

For me, to use a specific example, I know with absolute clarity that I'm unhappy in my current employment situation. It's largely unfulfilling and completely meaningless in the grand scheme of things. Thus, it's a contradiction because, well, here I am, still doing this work. If I could leave immediately, I certainly would. But, because we have a mortgage to pay, I need to stay here for the money. Thus, the management of these contradictions becomes important to one's overall well being.

Fortunately, the *initial realization* -- the clarity itself -- provides quite a measure of comfort amid the dissonance. That is to say: Since I now have a clear direction in life, I have quite a bit to look forward to, even while "stuck" here momentarily. Since I understand that my job is meaningless, I'm able to exist here for the moment at kind of a higher level, unaffected by petty things that might have bothered me here before (e.g., ridiculous office politics or just the unconscious unhappiness office environments can impart upon the workers). The only requirement is patience -- patience in awaiting a responsible transition to the next bliss-filled stage of our life.

I have found that being aware of the inconsistencies is incredibly satisfying in itself. Perhaps as a mother I have learned to be patient with the process. As the dissonance becomes evident, I too set goals as to correct it knowing that it will usually not be possible in one sweep. When I think of the changes that have been made since beginning this journey, it is mind-boggling. Sometimes I forget to be grateful for that as well and want it ALL now. Not going to happen...I'm not ready for that vast a change.

Oh, I agree whole-heartedly. In fact, I commented above: "...the *initial realization* -- the clarity itself -- provides quite a measure of comfort amid the dissonance." But, yeah, "mind-boggling" seems to describe most people's raw journey. You're right that we need to remember to be grateful, too! Thanks for commenting! -Jim

Thank you Jim that was a very good reply to my question and I understand much more.Even though I am new at being raw I have noticed that I have always wanted to learn music and even though I am 62 I am going to pursue it. It comes from having a more clear head on what I would like to do. You have sort of pointed it out to me. Thank you DOUG HARRITY

hi Jim! i totally agree about the contradiction thing that can "present itself" when one becomes more clear in thinking after going raw.

i'm in the process of "releasing" many of my personal possessions by selling them, not just because i really need the money right now, but because i'll feel like a psychological burden is lifted from my shoulders as well.

it's important to have essential material things. like, the laptop i'm using to send this message to you. but, most of the things i own i can sell. and live a simpler more minimalist style of raw zen living. :)