Welcome to Day 2 of Pure Jeevan's "Salad Dressing Week"!? Today we take a trip across the Pacific to the land of the "Rawsing Sun." I've yet to meet any raw vegans from Japan, but would be highly interested in hearing about what it's like to be raw vegan there. 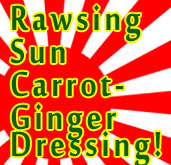 Today's video not only shows a tasty salad dressing recipe, but it's really a testament to bold improvisation in your raw kitchen. In order to create something new, you really have to be willing to experiment. Sometimes you simply fail!? But, more often than not, a recipe that you have not quite perfected just needs some tweaking.

So, this video gives you some insight into that process. You'll see how this dressing evolved from an admittedly mediocre idea to a fairly tantalizing realization (thanks to some super suggestions from Wendi while filming).

Here's the video, followed by the final recipe, below:

Hmmm, I wonder what tomorrow's raw salad dressing recipe will be!!

This really looks yummy. Some questions though:
Do you 'have' to use Sesame Seeds
Where would I get the Nama Shoyu, Wal-Mart or Schnucks
And cayenne pepper is for taste only, not necessary though

We have that same under the counter radio/CD player too. Love it. Lol
Yay for Wendi editing you. ;)

Sesame: I guess you don't have to use that. It would change the taste, though. Try substituting some other nut or seed (raw, unroasted, of course). Brazil nuts, macadamias, pepitos, sunflowers. And, if you do, let us know how it tastes!

Nama Shoyu: Oh, a good substitute for that would be Tamari sauce. San-J is a good brand, and available most places. Tamari is still a live food (live, but not raw), similar to Nama Shoyu.

Cayenne: Not necessary, but if you can stand a little spice, I'd recommend it. Even regular pepper, perhaps. Or more garlic.

Under-the-counter music plaers RULE! If only we could get one with an auxillary input so we could plug in an MP3 player, that would totally rock.

jim, how about this for tomorrow's dressing (what i have learned from gourmet chefs - both italian and middle eastern)... squeeze a lemon over a head of lettuce, add a splash or two of olive oil and then press a clove of garlic and add salt to taste. from there, i often add raw tahini or other nuts (brazil nuts go well with kale).