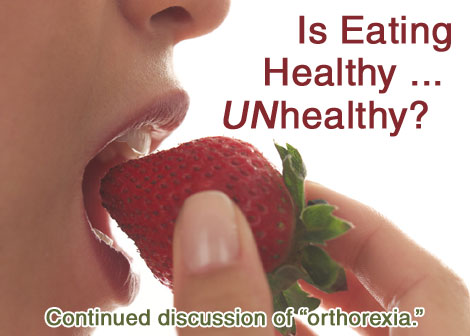 We ve covered this in the past here on the Pure Jeevan blog, but it s something that s being discussed again online in major news feeds. Since many people read and learn from such sources, especially Yahoo! News, there is potential for a lot of damage and misinformation to be ?learned? by many individuals. In a recent article on Yahoo!, we re informed in the ?Health Experts Main/HealthLine? category that consuming only healthy foods is an eating disorder. Those who desire a healthy body by consuming healthy (as opposed to unhealthy) foods are labeled as having ?orthorexia,? a supposed eating disorder that can be cured with cognitive behavioral therapy.

What does that mean, really? If we desire a healthy body, and all the vibrant energy that comes with it, then we are psychologically unbalanced? [Sarcasm to follow ] However, if we eat those same healthy foods, but also consume things like Kentucky Fried Chicken, McDonald s burgers, Wendy s French fries, or Skittles candies then we are balanced individuals and deemed psychologically healthy? What if we consume no healthy foods, preferring instead the Standard American Diet of fast foods, heavy meats and gravies, that includes few fruits or vegetables? Well, that s considered normal and of no concern in the least bit ? there is no eating disorder when consuming a diet like that. You can require caffeinated beverages to have enough energy to get through the day and that s normal, too. Die of a heart attack from such a diet and that s normal, too. 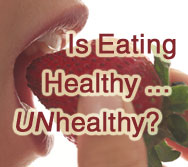 In the most recent ?orthorexia? article on Yahoo!, the author cites ?social isolation? as the risk of living with ?orthorexia. No other risks were mentioned. Perhaps it would have been too shocking to list the true risks of eating only healthy foods: You become healthy, you glow with vibrant energy, your body regenerates and appears to reverse in age, oh and the scariest and most shocking thing of all you will become a mirror to others, allowing them to see what true health is like and how much of it they are lacking. As for the isolation, that s usually brought about by others? reactions to something that isn t ?normal? (because, let s face it ? eating fresh fruits, vegetables, nuts, and seeds isn t natural/normal). It s others who are excluding those who are eating healthy foods, others who are uncomfortable with the choices being made that don t fit in with their beliefs of what is the ?right? way to eat. They ll tell you they re concerned for your health (even if they are overweight, run-down, taking medications, etc., and you are vibrantly healthy and happy) and that you need help with your eating disorder.

What s sad is the fact that those who are concerned for your health truly believe you have an eating disorder. They genuinely feel you are harming yourself by eating foods fresh from nature, and that you have a psychological problem and need help. Many are so blind to the truth of their own ill-health, their own eating habits and dietary choices. As a society, we are raised to go through stages of growth ? from one level to the next, set out for us by a societal view of what is best for the majority ? and to never question or challenge those stages, or anything else that is a part of ?normal? society. Many never question whether processed foods are truly food for the human body, whether artificial additives do harm to the body, or why we create ?food? from non-food items. When someone does break free from the mass non-thinking way of living, and begins questioning such things, they are often met with blank faces or ridicule. ?Of course it s a food ? it s sold in the grocery store and people eat it. People aren t dying from eating it, so it s definitely okay to eat. It s an underlying trust, which society teaches us to have, that seems to turn off our innate ability to question for ourselves. We trust that the thinking has been done for us, that no one would try to feed us something that isn t truly food (or that is harmful to our bodies). Everyone else is doing it, so it must be right.

Living a life outside of the ?norm? ? thinking for ourselves, asking questions, and making choices that don t always fit into society very well ? can sometimes be frustrating. Once we have woken up and exercised our ability to think for ourselves, to question what others never even consider, there is no going back. The most we can hope to do is continue sharing what we know, what we have experienced, with others. Those walking in the shadows between sleep and waking may be inspired by something we say or do. It may awaken their own ability to think outside the box, to question and research and learn a lot more than what is commonly understood about things. It is actually our society, as a whole, that is suffering from a disorder. The irony is that consuming fresh, healthy foods is what can begin waking them up from it!

You hit the nail on the head! My husband and I are transitioning into a mostly raw food lifestyle. My husband has lost over 40 lbs and I have lost 30 lbs. The people at my husband's work make comments that he is withering away to nothing while at the same time saying they should probably do what he is doing. What a land of confusion they are living in. Most people are living in a land of confusion when it comes to food or what most people call "food". I have heard certain people make comments after we have told them of our new eating lifestyle things like, "Oh, I could never give up my Starbucks, or I could never give up "fill in blank". We have learned on our journey over the past 3 months that most people are controlled by their food and beverage choices, the refuse to say no to unhealthy processed food and drink. Yet they think we have issues because we no longer choose to consume those things. All we can do is be an example and hope that a light will go on and when it does, they will know who to turn to for information on how to become more healthy and vibrant. Thanks for your blog and all the work you do!

Congratulations on your positive changes with a healthier diet! I totally agree that the best we can do is be an example! It's so wonderful that both you and your husband are on this journey together!

Is all common sense gone ! For crying out loud - how can ingesting garbage be normal, and ingesting vibrant, living foods in their natural state unbalanced? Argh!!! :p

This silly orthorexia idea comes from the overwhelmingly popular, "Intuitive Eating" movement within current eating-disorder treatment. The idea being that there are no "bad" foods and that extremes of eating (stuffing oneself on one extreme, denying all food on the other) are dysfunctional--hence, bringing eating back into "balance" by teaching patients/clients to not demonize any foods, but to cultivate a balance by eating only when hungry and stopping when full. This assumes ALL foods are fine in moderation.

Okay. Intuitive eating has helped a lot of people suffering from eating disorders. However, I see it as apples and oranges (if you will) as compared to eating raw; it's just a different, ironically unhealthy, approach. So, although Intuitive Eating is the new "sexy" in the ED-treatment arena, that doesn't mean it truly represents the pinnacle of healthy eating. I happen to believe that eating raw or mostly-raw can cure eating disorders and skewed relationships with food.

But working with dietitians and other therapists as I do, I've found great disapproval in even questioning the Intuitive Eating treatment approach--those who embrace this treatment modality can be pretty militant in their belief that this is the one true way to a healthy relationship with food.

Let's be real; this stuff is largely fueled by politics anyway. How do we know what we know about what's supposedly "healthy " We are told that eating the SAD is healthy. We're told this from most every outlet. And even dietitians (who supposedly understand the science behind healthy eating) blindly accept the counter-intuitive idea that animal flesh, dairy (especially), eggs, caffeine, GMO- and pesticide-ridden foods, etc. are just fine to eat "in moderation."

Alright. And how's that working for the majority of Americans who require a litany of expensive prescription medications to "treat" entirely preventable things like cancer, heart disease, high blood pressure, diabetes, endocrine disorders, and the like?

If everyone ate raw, what would that mean for corporate food production, fast-food chains, pharmaceutical companies, etc? Ultimately, this orthorexia BS is just another attempt to keep us brainwashed that the Standard American Diet equals health.

Believe me, we understand your frustration, Robin. ;-)

Wow, thanks for such a thoughtful comment, Jenn! I wasn't aware of the "intuitive eating" movement with therapy for eating disorders.

It's so strange how when people speak from a place of authority, those around them trust what is being spoken is accurate.

Thanks, again, for your comment. I'm sure it will ignite a lot of thought in other readers of this post!