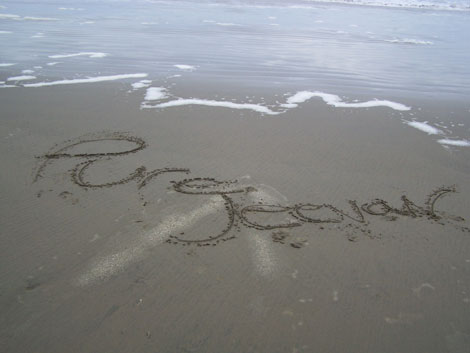 Eugene wasn t quite the right fit, either, even though the city is totally progressive and a great place to visit. So, we decided we should spend some more time in Portland to see if it feels like the right place to settle. When we arrived, we loved Portland very much!? But, we only stayed briefly because we were so sure at the time that Corvallis was going to be "the" place. (We didn t want to spend all of our time in a big city when we thought we were looking for a small town to settle in.) So, we're going to head back up to Portland to see what we think before continuing on with our journey.

Our lovely hosts in Corvallis, the Zander family, suggested we take the scenic route and visit the coast of Oregon along the way. Not only would this be beautiful, they suggested, but it would allow us time to think things over more. Plus, this would also be a nice way to see even more of what is available in the Corvallis area (since we just weren't 100% sure yet about what felt right for us).

So, we drove over to the coast (less than an hour s drive) and it was beautiful! So, add that to the huge list of amenities offered by the lovely Corvallis!? The drive to the ocean, the actual ocean and beaches, were ...WOW! What a beautiful part of the United States! Everyone should be able to take time from their lives to explore the world a bit more. There is such breathtaking beauty everywhere ? and this is part of what life is about (experiencing the beauty all around us). Wow! Here are some pictures for you!

As she said, she sent a bunch of pictures. Let's have a look, shall we?

Wow, ... I think Wendi's right about taking time to explore the world and appreciate its beauty. So, someone please tell me again why I'm sitting in a windowless office inside of an ugly concrete building in Pittsburgh today? Perhaps it's to endure this even longer so that I'll never make this mistake again! Paychecks are nice, but when you're old and decide to reflect on your life, what are the chances you'll say, "Wow, I'm so glad I sat in that dreary office most of my life and made all of that money"? Not bloody likely, my friends. "Jeevan" is the Hindi word for "life." Those pictures ... that's life!? And why raw foods ? ... Simple: It gets you MORE Jeevan.

Absolutely beautiful! I am enjoying reading about your quest!

I still think Portland could be the place. From what I hear, there is a really big raw food community, but having you all there could be just what it needs for an additional shot in the arm. Regardless....those photos are breathtaking and Wendi & KDCat look so happy....I loved seeing them and I am totally traveling vicariously through them!! (Jim I am believing you'll be outta that office very soon!!)

great beach pics. i think i might have been to that same one at some point.

Wow...it's so beautiful!
I wonder where you will end up. Looking forward to talking with you soon...so bummed I missed your call today!
Love,
Melissa

I suspect there's some Portland content coming to the blog soon. :-)

I agree -- it's be great to raw-ify Portland even more. :-) And, thanks for the vote of confidence re leaving my day job!

I wonder that everyday while sitting at my desk here in Indiana.

By the way, while in Portland, be sure Wendi visits the Powell Books Store. It's one city block big and about 5-6 stories high. There is a raw food restaurant close to it. The electric trolly can take her there practically from anywhere.

Yes!..Make it Portland and Ruthann is right visit Powell's and then go over to the raw resturant called ( I think) The Blooming Lotus....then go to the back and do a little YOGA when your at it... Ellen Ridenour

Yeah, unfortunately, many people can relate to that sentiment (not being in a rewarding job). I'm sure we'll all visit Powell's. We were both English majors in college, so we've been known to put some time into book stores. I could spend a week in a store like that. What fun! :-)

Ellen, see the blog today (Wednesday, March 10). Wendi interviews on fo the owners of that restaurant!

As a Washingtonian - does it get more beautiful than the Pacific Northwest? It's truly amazing. I'm from Chicago area orignally, we've been here in WA State for 21 years - we don't plan on leaving.