In fact, the first interview, a three-part discussion with Myra Goodman, co-founder of Earthbound Farm -- perhaps the largest name in organic produce in America -- is already posted:

>> Here's a link to the complete interview, archived right here on PureJeevan.com.? <<

(Natural News has an article-length policy that requires longer pieces like these to be broken up into smaller chunks. So, we like to have our own archive where you can read the complete interview at once.)

Myra's got some great things to say about organic farming, so I hope you'll invest some time in reading it. I'm very grateful to her for spending two sessions with me to discuss some of the issues we covered. The title of the piece is taken from a point she made that I found particularly telling: Organic farming is a relationship with the land:

So, again, read through that interview when you get time and let us know what you think!

We're big fans of Natural News here at Pure Jeevan, btw. If you're unfamiliar with that site, it's pretty much exactly what the name suggests -- independent coverage on natural health, natural living, nutrition, and more. They receive roughly 3 million visits per month! -- largely because it's run with uncompromising integrity by Mike Adams, aka the Health Ranger. (Take a minute to follow that link, as Mike has an incredible story.) Here's a snapshot: 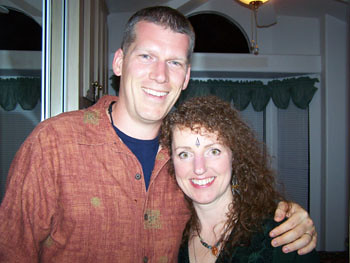 Love this idea, you two are just doing some amazing work!
deep bows of gratitude
deb xoxoxo
PS does my square foot garden count as a farm? so I am an organic farmer?

LOL Yes, Deb, you're officially an organic farmer. Could you talk for an hour about that square foot plot? Maybe I should interview you! Seriously, though, Wendi and I fully intend on obtaining land and producing as much of our own food as possible in the hopefully not too distant future. So, we have great personal interest in this area. And, on the practical side... as you know, raw foodies eat so much produce that it can become hugely expensive if you really want to commit to organic, as we do. So, it's a real win-win to be able to save money, learn and spread this knowledge, do the right thing in terms of environmental stewardship, enjoy peace of mind with respect to the food we're eating and our assurance that it's pure and untampered with, enjoy the outdoors and the sunshine, and also just stay in touch (quite literally) with the Earth.