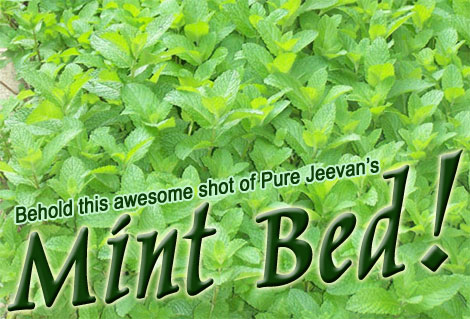 I wrote on Monday that today (Thursday), we would be discussing mint here -- specifically, harvesting some late-remaining mint from our mint bed (shown above in all its glory) and making something with it. I failed, however, to take into account that it's been getting darker earlier and earlier these days. By the time I was able to get outside and talk about mint, it was just too dark.

So, I thought I'd forego the video, and just write up some minty facts to freshen up your Thursday. To begin, I would highly encourage anyone who is new to gardening, and wants some early success, to experiment with mint (including spearmint, peppermint, and the various varietals available here and there). I can almost guarantee that you'll have some wild (and I do mean wild!) success, and will soon enjoy more mint than the law allows. It's so easily grown, and spreads around so easily (via its root system), that it would almost be considered invasive if it weren't so darned desirable and fragrant. (It's tough to walk past a mint bed without snatching up a leaf, rolling it between your fingers, and inhaling the scent deeply.) 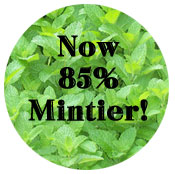 As a bonus, mint is a perennial, which means that you won't have to plant it each year. Like many other perennial herbs (e.g., oregano, thyme, sage, rosemary, etc.), they're truly gifts that keep on giving. I've read reports of the stems becoming more and more woody over the years, supposedly necessitating a replanting. Maybe we've just been fortunate here in Pennsylvania, but we've never had to replant our mint; the bed returns just as full each year. I think it does get taller and thicker, but it still produces wonderful mint.

While many people associate minty things with sweetness (because of its traditional use in candies and so forth), you may only think of mint for use in sweet dishes (in which it does go very well). But you might also try mint in other dishes, for example Wendi's Cauliflower Mint Salad (an original Makin' It Monday creation from more than a year ago), or Leela Mata's Marigold Mint Chutney (a Makin' It Monday video from this past summer).

Of course, if you do like sweet minty raw desserts, I would highly recommend my own infamous brownies. Just omit the cinnamon and use an edible peppermint oil instead of orange oil (about 10-15 drops will flavor it nicely). Wow, that post is a few years old. I really need to make those again sometime because they're so delicious. For anyone new to raw foods, these brownies are a super great "transition food."? (While some raw foodies kind of come down on raw desserts, Wendi and I both lost significant weight while eating such things. So, ditch the guilt; these are healthy!)

Everyone likes mint, of course. This is likely related to its renown for being a soothing herb. Quite often, when we think of the soothing property, we're usually thinking of soothing a stomach issue, such as digestion (although mint is also fairly soothing just in general). Many chefs will therefore include mint in as a digestive component of a recipe. So, when you're crafting something that may sit a bit heavy, you might consider adding some mint to the recipe. It's all about experimentation, of course. And, again, mint usually produces so much, you'll almost always have far more on hand than you'll know what to do with.

One idea for using up some of the harvest is to dry your mint for later use as a tasty and very relaxing tea. To do this, simply harvest a bunch and hang it to dry for a week or two. Then use a tablespoon or so of leaves per tea cup. I've read, btw, that herbal teas should be steeped, not boiled as you might do with a black tea.

While you can enjoy mint leaves at pretty much any time in the yearly cycle of growth, it's generally considered a best practice to harvest your mint just before it goes to flower. Doing this, and also remembering to harvest in the morning, will ensure that your cut herbs have the best concentration of their esssntial oils.

That leads me to a final note. I think many people might be interested to learn how to make their own essential oils from things like mint. I won't cover that here today, but will promise to return to this when the time is right. Again, this would be an excellent project for mint, as you'll often have access to enough raw herb at home to pull off a decent essential oil. (Of course, there are various ways to make an essential oil, and some take more herbal material than others.)

Oh... We may have a guest post tomorrow! I suppose the only way to find out if that's true is to tune in again tomorrow. If we do, I bet it'll be 85% mintier than this post today!

My husband loves mint! I dry mint about 1 lb at a time in the D and keep it in bags. He has mint tea every morning, and actually I do too now, I sip it while doing my morning yoga. I keep the extra bags in the freezer just in case.

What a beautiful mint garden! This was the first summer that I have grown mint and have dearly loved putting it in my green smoothies (with canteloupe) and really enjoyed in my chia seed pudding. Thanks for the tips in how to dry and store it, Joanna! Still have more to harvest before the weather turns really cold out there!