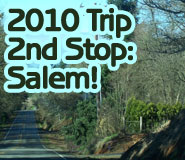 Wow, today is Day 7 of the Big 2010 Tour! So far, Wendi and KDcat have spent three days on a train and three more in Portland, Salem, and Corvallis. We still have plenty of content to post from those, including a good deal of video (once I'm able to edit that). For now, let's look at some pics and talk about their second stop, Salem!

Prior to leaving, Wendi & KDcat (let's just say "W&K" from here on out, okay ) stopped at People's Co-Op in Portland for supplies. As much as they loved Portland, they weren't very impressed with the co-op there, as compared to the one we have in Pittsburgh. However, in fairness, they were told that it's still a "young" co-op. Still, it's surprising to me that Portland wouldn't have an enormous one. However, it could very well be that there is not as much of a need there, in an area in which organics are much more accepted. Here in Pittsburgh, one could argue that our co-op thrives because organics are largely scoffed at by other retailers. Interesting, eh?

(By the way, are people on the west coast really as laid back as everyone says Wendi got into a bit of hot water for filming inside another co-op! Here in Pittsburgh, I doubt anyone would care if you set up a movie set in our co-op. No charges were filed, thankfully.)

Anyway, in Salem, W&K were hosted by Pure Jeevan family member, and fellow homeschooler, Kerry Matson and her family. Her husband, Gordon, and their children Colton, Sutter, and Makenna made them feel at home and showed them the wonders of Salem. KDcat enjoyed their dog, Sula (shown in the pics) as well as their cats! She also had a lot of fun roller-blading with Makenna. Here are a few snapshots:

For the first time, W&K got to experience Oregon in the rain during their drive down from Portland. Naturally, it rains a lot in such a verdant part of the country. However, in this temperate climate, that turns out to be a huge boon for any raw fooders (or, really, anyone who enjoys foraging). There are berries galore in Oregon -- and that's really exciting for us! Kerry said they're super cheap and super sweet because you can pick them fresh and eat them right away. Wendi sent me an email stating, "Blackberries are pretty much considered a *weed* around here! !?!"

Imagine that!? I suppose it's like that all over. When you have something in such abundance, you tend to take it for granted. (Reminds me of our experience last year with coconuts in southern Florida!) Although, as raw foodies, I can't imagine ever taking these precious gifts from nature for granted. Can you !

In Salem, W&K took note of MANY grocery stores that sold organic produce -- "LOTS of them," Wendi excitedly noted. On top of that, Kerry showed Wendi a map of the area for farms where you can pick your own produce ... and the prices are amazingly cheap.

You know, part of what we've talked about here on Pure Jeevan is the growing importance of becoming more involved in your food choices, and in fact in learning more about growing your own. As the world becomes more threatened by and saturated with GMO abominations and "conventional" pesticide-laden crops, it behooves us all to take an interest in organic agriculture. Wendi and I have a goal of nearly full self-sufficiency on a large plot of land. But, anyone can produce healthy food; people like our buddy Mike Lieberman, who lives in Brooklyn, are showing how even city dwellers can grow their own.

W&K saw many, many small farms around Salem. It's nice that the farms are right outside the city and it's easy to live a more rural life and still connect witht he city. Salem is nice -- not too small or big. It might not be hip enough for KDcat, though. We'll have to see how she rates it in comparison with all of the other places they'll visit. Wendi was mostly super excited about all the available organics in this town. They visited many different shops and markets, and took some video of the organic fruits ... and the cheap prices! Here's a super-short peek at that:

Their next stop was Corvallis, so stay tuned for that report!

Once again, we thank our trip snack sponsor, Natural Zing, for helping us to make this possible on our budget!

YAY!! I am so thrilled that you all stayed with Kerry and her family! How awesome is that ! Kerry & her daughter, Makenna were research guinea pigs for my book! Such precious people.

I'm so fascinated with this road trip of discovery....I LOVE that you are sharing pieces of each day's experiences with us. Jim, thank you so much. I bet you are missing your girls by now.

Actually in Tigard (a suburb of south Portland) there is an Asian market called H Mart, that has a quit large & very diverse organic (and some not) fruit and vegie section that amazed even me & I've lived in Salem & in the Willamette Valley off/on for 13 years. H Mart also has other desireable products (and some not so desireable), too including various kitchenwares, steamers, eating and food prep aids, & bulk grains etc. Next time I'm there I will take some pics and share them with the Pure Jeevan online family.... Gary

It IS awesome, Penni! I actually missed one of Wendi's vids for this post, so I'm running it tomorrow -- in which Wendi interviews Kerry on her path to raw. Kerry mentions Pure Jeevan, and also Raw Food Rehab (and holds up a copy of your book for a sec)! So, be sure to watch that tomorrow.

... I do miss them soooooo terribly much! But, we video chat each night, which is actually a lot of fun. And, the trip is going to find us the best new home town ever! So, it's worth it. :-)

That would be great! BTW, I'll pass that along to Wendi, as she and KDcat have actually decided to explore Portland a bit more. More on that later! :-)

you know what--people OVERALL are more mellow on the west coast, but it doesn't mean that there aren't some uptight folks. in the east it tends to be more extreme--people who are really uptight and then those who are reeeeally laid back. we all have our own personalities though. :-)

excited to hear about the corvallis stop! never been to many of these places even though i am relatively close. i like traveling vicariously through WD&KC.

I will be sure to watch the video...I don't want to miss any of their trip, actually. What a marvelous adventure! I am so happy to know that you all are able to video chat with one another nightly....I understand you got Wendi pretty tricked out with technology before they left ;- ) I am counting the days until they are in Tulsa with me and I have a special event that we have been invited to on March 26th at 105degrees in Oklahoma City....I'll email you the details so you can tell Wendi!