EDIT: This is NOT an advertisement.

Jim just thought it was interesting how he could easily substitute "raw food" in place of the ROM machine and have their advertisement make sense for the raw food movement.We will NOT be purchasing a machine like this. ;-) 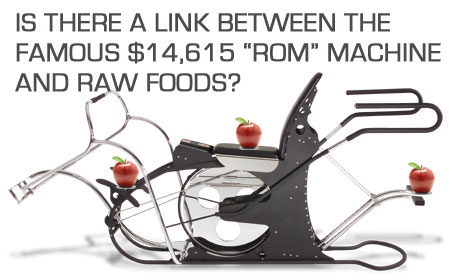 Jim here... I promise this piece will have some relevance to raw foods, but bear with me for a moment.

Ever hear of a ROM machine ? I first heard about them years ago while reading about a book I'd meant to buy at the time. The book was called "Fantastic Voyage: Live Long Enough to Live Forever" by Ray Kurzweil. (His site, I think, is here.) Now, I never did get around to reading that book, but my understanding was as follows:? With technology advancing as it has been, it's forseeable and reasonable that, in the coming ages (accessible to many alive today), we will see incredible technological advances that will allow people to live indefinitely. A lot of this had to do with nano-tech and other cutting edge science. So, this book discusses the possibility of living for centuries, maybe longer. Sounds pretty interesting, right !

The author, I read, is so certain of this coming age that he has been obsessively doing all he can to ensure that he's alive during that near-future time when this radical, indefinite, life-extension technology is available. (One wonders whether he's read about raw foods ??) I'd read some reports about his rather radical health practices. For example, in this Wired interview, he says he takes 150 supplements/day! And for exercise, he reportedly uses a ROM machine.

Now, a $14,615 ROM machine supposedly offers, in just 4 minutes/day, a workout equivalent to 20-45 minutes of aerobics, 20-45 minutes of weight training, and 20 minutes of stretching. I can't say whether it's true or not, but a lot of people swear by these things.

Okay, here's the raw food angle.? I saw an advertisement for one of these machines recently. The ad listed an incredible 10-stage process that, they assert, the typical ROM purchaser goes through. I'm going to run those 10 below, only slightly edited to include the words "raw foods" where it normally says "ROM." See if this doesn't fit almost perfectly to what we're used to:

Yep, ROM company, we raw foodies can easily relate to what you're saying!? I don't know about taking 150 supplements/day like Ray Kurzweil, but I'd like to try a ROM someday. Anyone ever tried one?

no I have tried one of those!

but I would rather exercise the old fashioned way - running, walking, gardening, playing with the kids etc!
Spend the money more wisely I think!
bye
sheryl

I hope that post didn't seem like an ad--it definitely isn't. Jim just thought it was fascinating that the description for the machine could be applied to raw foods, as well!

Trust me, our money is all being spent to help the raw food community grow and become stronger. Our mission doesn't allow room for expenses for something like that ROM machine. Plus, I doubt it would fit in the RV that we'll be touring the country in, either! LOL

My husband owned one of these. He bought it before we were married (otherwise this kind of purchase would have been quickly veto'd :) I snubbed the thing as soon as I met it and chuckled it off as a ridiculously expensive gimmick. As far as I'm concerned he contributed to the fortune of the creator.

Like Sheryl, I come from the old school of fitness. You must dedicate at least 20 minutes of a sustained heart rate within your "cardio" zone to reap such benefits, including weight loss, at least 4 to 5 times a week. And as far as strength training, your workouts must feature isolated movements targeting specific body parts, including weight resistance with varied ranges of motion. And flexibility? Yoga, Pilates, dancing, or old fashioned stretching exercises. The ROM touches on all of these things in some way, yet in a very limited fashion.

Having tried this machine myself, it's like this.... You use both your arms and legs at a set resistance and work up into almost a rowing type motion. A digital reader reminds you to push/pull harder to sustain a certain RPM. It's not easy, especially as a beginner but likewise I think it'd be pretty difficult to max out on the thing. It gives an intense strength training challenge which in turn drives an intense cardio workout. But it is short-lived. Too short, in my opinion. Too intense, because even if you stretched the work-out to 8 minutes you are utterly exhausted. And I believe this isn't adequate for the time, endurance, isolation, variety, and flexibility needed of a well-rounded work-out. Therefore, I have much to question on how this 4 minute workout can claim to be equal to the 20+ minutes of all exercise components.

We no longer have the ROM. We sold it and replaced it with more conventional and effective equipment (like an elliptical trainer and Pilates reformer). My conclusion: Yes, your muscles will be sore the next day. You will feel you did some work. But a 4 minute workout using the same limited movement day after day will not suffice over the long term. I do not know how raw food, or perhaps someone incorporating raw food with other energy regimens and then complimenting this with a ROM would work. However, $14,000+ for a piece of equipment that promises results in 4 minutes a day rings to me as a pitch to appeal to those looking for a short-cut, and willing to make a lofty investment to obtain it. I think Ray Kurzweil is a brilliant marketer.

Thanks for the ROM description! For the record: I've never used one, nor am I considering purchasing one. Really, I have no opinion about them at all, good or bad. I just thought their marketing literature was highly interesting and relevant to the way people feel about raw foods.

I do know that they're touted as a time-saver for ultra-busy people who want to squeeze in a workout. I may be busy too, but, trust me, I'm not $14,000 busy! Besides, I'd rather grab my New Balances & just run for 40 minutes. So, I'm probably more in agreement with your stated exercise preferences.

There is, of course, another important point here -- which is to not get yourself so busy that you need to work out in 4 minutes. Long-term, that goal (of making time for personal interests) is probably a better solution than trying to shoe-horn a 4-minute routine into an already "redlined" lifestyle. (I used to be like that -- always working all the time, sleeping 5 hours/night, eating awful foods. It led to obesity, high blood pressure, and unhappiness.)

All in the past, though... Now I'm raw, well rested, clear-headed, and happy with my direction in life.

ps Also, just to clarify, Ray Kurzweil is not a marketer for the ROM company. He's a popular author/inventor/scientist tyype who happens to own one.

I can only comment from a pure marketing viewpoint as I have never heard of, much less used, this kind of machine. I am with you on the 10 market points that the ROM marketing is using and that it could also be as useful for RAW advertising/conversation.

I'm half way complete in a masters in Integrated Marketing Communications degree program. I have some marketing info on my personal website if anyone is interested. Word of mouth is still one of the best marketing tactics, and I have to believe that word of mouth coupled with eating, especially showing people HOW and WHAT to eat, is an awesome way to sell the raw food way of eating. :)
peace,
sheila