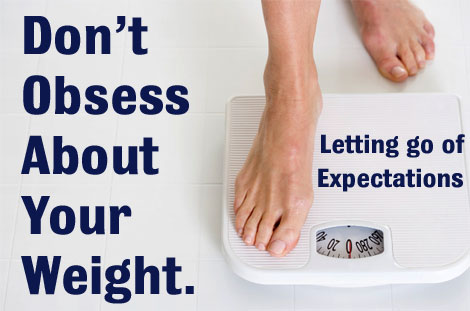 Jim here... While browsing a thrift shop for a smaller belt yesterday, I was reminded to make a few quick points here at our blog about the raw food diet and weight loss.

Many people are initially drawn to raw foods for the weight loss aspect of this lifestyle. Where most other diets ultimately fail in this area, raw foods usually brings wild success. So, for anyone considering a raw foods diet specifically for the purpose of weight loss, here are a few quick tips centered around the theme of "letting go of your expectations."? You may be wondering, "Why should I let go of my expectations for weight loss " Well, here are two big reasons:

First, you need to realize that, if you're significantly overweight (as Wendi and I both were), it's possible -- even likely -- that your physical health may be compromised by other problems in addition to what you see in the mirror. Some of these things may already be apparent to you (for example, the high blood pressure I was once medicated for); others may linger yet undiagnosed. So, one big reason to let go of expectations relates to the common desire for immediate results.

Simply put, your body may well decide to attend to some other health issues first, before getting around to your weight issue. We've personally witnessed many people try raw foods, only to throw in the towel, discouraged, much too early.

Our bodies are so much smarter than we realize or could ever fathom, but many people forget this and quit raw after much too brief of a trial. So, again, takeaway point number one here is: Don't give up. Stick with it for a much longer stretch! If you're sick and overweight, there's one certainty in play: raw cannot hurt you or make your condition worse. Raw food is the healthiest diet currently known; it can only help a body return to health!? So, stick it out. You'll be doing yourself no harm by doing so.

Second big point: Don't continually zero in on your scale, or your belt, or any other thing you use to gauge your weight. It's like waiting for the phone to ring -- the more you focus on it, the longer it'll seem to take. I rarely step on a scale. It's only for a funny reason, though: Our scale is one of those new-fangled electronic varieties. It supposedly tells your weight, your percentage of body fat, and even your IQ. I think it even speaks, though I cannot for the life of me figure out how to work it (even as I'm proudly a techno-geek 99% of the time). (What ever happened to the good old days when you stepped on a scale and it simply indicated your weight !)?

Anyway, for this quirky reason, I rarely weigh myself. So, this suggestion is more of a bit of "accidental wisdom" rather than some strategic concept. But it's worked for me. By not constantly monitoring my weight, I think I've found a way to just let my body right-size itself, at its own natural pace. What I've noticed throughout this journey has been the pants becoming looser and the belt notches tightening. And even that isn't something I've obsessed over. I basically just eat healthily and live with the confidence that, by doing so, my body is slowly returning to its own state of optimal health. Looser pants and finding myself in need of newer, smaller belts... These things are just periodic bonuses that reaffirm what I've learned to have absolute faith in -- that it's worth sticking with!

Finally:? I just want to add that weight loss may be your primary motivation and inspiration -- and that's perfectly fine. But in time, I think you'll start to see broader ideas about health and happiness forming at the event horizon of your very near future. And that's when the real fun begins. So kick back and just trust me: Your body *will* rightsize. Of that I'm 100% sure (IF you give it enough time to do so). After that, strap in for the ride of your life. ;-)

Thanks for the reminder. I am going to post a link at the Naked Food Cafe Community.

Nicely put. I believe I tend to obsess with the scale way too much...In fact, I get frustrated whenever I see fluctuations up and down..You are rigt in saying that we should let our bodies to right size themselves. I am encouraged by the fact that if I continue on, I will be seeing big results sooner or later.
Great post Jim!

Of course you will, Eva! Fluctuations are totally natural and shouldn't be a source of frustration for anyone. And I suppose that's doubly true for women, who are cyclical by nature anyway. So, try saying away from the scale for a spell and see if it doesn't help. :-)

I also think, btw, that this post ties in well with Wendi's recent post on whether people need to be 100% raw. If a person sees no results for a LONG period of time (i.e. many months), it could very well be that a higher level of raw and/or that another variant of.raw is indicated.

Hiya there
just wanted to say a major THANK YOU, for all the info, you so generously gave away everyday. I am rather new to the concept, but have been adapting and making a few changes here and there, and feeling different ... I have to say ... even happier! go figure... but this is not new for you, right? lol
a special hug from across the Atlantic
Ana
(reading you from Portugal)

I've lost a lot of weight with raw food, and I feel I still have some fat to lose. What I realize is that it's not raw food that can make you fat-quite the contrary. Raw food really thins you down. It's out THOUGHTS that can make us fat. I've found that by thinking thin thoughts, I become thin, and that I know with unwaivering faith that I will reach my ideal body weight and image.
=]

Good reminder Jim, from one who has a hard time letting the "weight" thing go. Now it will be easier. : )

so wise and well put! if everyone followed these concepts, what a healthy, happy world we'd live in!

i really like your blog its very nice information.
Check out my new blog
http://fatloss-plans.blogspot.com/ You can find easy ways to lose weight, fat loss dieting