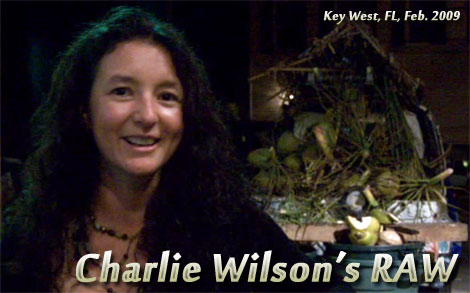 When we found out that there was a raw foods restaurant in Key West, we knew we'd visit for sure. So, after a wonderful lunch of some of their raw staples (raw tacos and peanut noodles), it was no surprise to us that we found ourselves drifting back toward Help Yourself after the sunset celebration at Mallory Square (the main nightly Key West sunset viewing celebration). When we arrived, we asked to interview the owner, Charlie Wilson. She'd just left after working a very long day at the restaurant. But, an emplyee called her anyway and she graciously agreed to come talk with us! So, here's a bit of that conversation:

After speaking with Charlie, we spoke for a while with one of her employees, Randesh. We'll post that video next in our "Florida Keys coconut installment."? Thanks again to Charlie for speaking with us. If anyone is heading to Key West, a visit to Help Yourself is a MUST. Their web site is www.HelpYS.com.

Here are some more pictures from our Help Yourself visit: 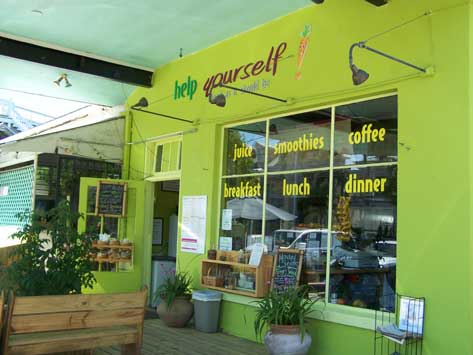 Here's a shot of the front of the restaurant, taken earlier in the day. (We took the video in the evening after dining there for the second time that day!) 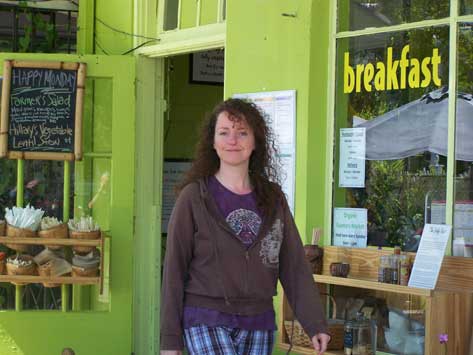 Wendi Dee in front of Help Yourself! 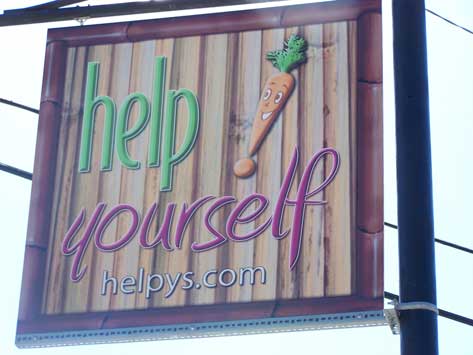 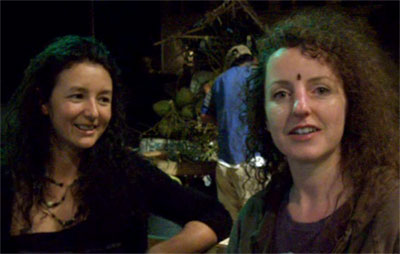 Amazing last few posts. So glad you had such a wonderful time in Key West. I've never been there so it's all fascinating to me. Although, the next door neighbors (in the house where i grew up) used to live in Key West. i dunno. maybe it was my imagination but i always thought that they had such an adventurous spirit about them (this family) having lived in Key West.

Help yourself looks awesome, man we're going to just have to take a drive one weekend and go visit the Keys... this is all so enticing! And Wendi you're so photogenic! Great article.

I love Charlie! I use to see her here and there when she lived in NYC.

Great video! Charlie is quite lovely (and you are too Wendi!) Looking forward to the coconut opening video ;- )

Thanks, Wendilou! Hope you like part 2, which we posted today! -Jim

Hey Carlos! Yeah, "adventurous" seems fitting. There was a real bohemian vibe there in Key West. Our daughter really fell in love with the place. I had some more great video of some kite surfers from that day, but our Sony Handycam freaked out on us and we lost tons of pics & vids! Key West also had a decent performing arts & music scene, so I know you'd like it there! -Jim

Oh yeah, Help Yourself was a fun place to hang and get some rawsome goodies. We definitely recommend a visit! Wendi really enjoyed doing that interview. I'll pass along the compliment (which I agree with!). She's still a tad under the weather tonight. Best, -Jim

Yeah, Charlie was absolutely great. She made a special trip back to the restaurant that night (after working there all day long) just to talk with us. I figured you might know her, Dhru. She said she'd worked at Pure Food & Wine and One Lucky Duck. She's a vibrant individual with lots of great ideas about bringing raw foods to a mainstream audience. It was kind of magical to just hang out on a warm evening outside (in February!) & just chat. I could easily get used to a place like that! -Jim

Thanks, Penni. I'll pass that along to Wendi. Looks like I'm holding down the Pure Jeevan fort alone tonight, as Wendi turned in early to get some much needed rest. Must've been a pretty powerful bug going around; we raw foodies rarely get sick, you know !