In this special five-part series, Joanna Steven uncovers where some top vegetarian athletes get their protein. Here's part one, focusing on Tim VanOrden's take on this issue.

When alternatives to the Standard American Diet are discussed, protein is on everyone's mind. There are many reasons why someone might want to eat a plant based diet, whether for allergy concerns, health reasons, or more variety. But nagging doubts often come up;? Are plant proteins adequate for athletes and body builders ? Are they really the preferred protein source of the human body ? Are they better than animal based protein or are they just consumed for environmental reasons ? To answer these questions, why not ask the experts:? triathletes, professional dancers, bodybuilders and extreme sport racers ? Here are the answers from some of the most competitive athletes in their respective fields.

Over the past 3 years, Tim VanOrden has transformed himself from a sedentary couch potato, suffering from severe depression and chronic fatigue into one of the world's fittest 40 year athletes. He did this by adopting a simple raw vegan diet.

Looking to expand the limits of human possibility, Tim has re-written the record books in some of the world's most grueling sports. In September of 2008 Tim shocked the world of skyscraper racing by defending his title at the 75 story US Bank Tower Stair Climb in Los Angeles. Not only did he best the two most dominant stair climbers in US history, but he smashed the course record in the process.

Tim is opening the eyes of athletes around the world to the possibility that a simple, raw, plant based diet can provide performance and health beyond that which has been previously experienced. In the winter of 2009 The Food Network will for the very first time venture into the world of raw foods, airing a prime time show that follows Tim and his adventures with the Running Raw Project. 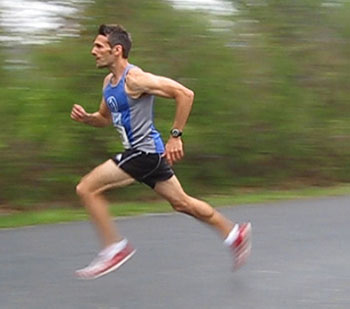 "The most common question that I get as a raw vegan athlete is, "Where do you get your protein ". At first I would become defensive or annoyed when I would hear this query on a daily basis, but I've learned to use it as an entry point and eye opener. Not only are protein requirements grossly exaggerated in America, but the sources of these proteins are also quite skewed. Proteins come in many forms, some better known than others. My favorite of the lesser known proteins are present in all fresh fruits and vegetables. They go by the name "enzymes". That's right, those wonderful enzymes that get so much attention in the world of raw foods for their digestive properties are also made of complex chains of amino acids; a.k.a. proteins. It is crucial to eat fruits and veggies in an uncooked state to keep the enzymes/proteins intact and bioavailable. Due to the abundance of proteins/amino acids in fresh fruits and veggies, I don't feel that it's necessary to consume concentrated forms of plant protein ... but if I were to recommend a plant based protein source to someone I would definitely go with hemp seeds in their whole, natural form - not broken down or refined into a powder. The added benefit of hemp seeds are the high quality essential fatty acids and soluble fibers that accompany the proteins, making hemp a very powerful food."

In addition to being rich in complete protein, hemp is also a great source of essential fatty acids, antioxidants, vitamins, minerals, fiber and chlorophyll. Hemp protein is a quality source of the amino acids arginine, histidine, methionine and cysteine and also contains all the branched-chain amino acids crucial for repair and growth of lean body mass. Almost two-thirds of hemp protein is comprised of edestin, a protein found only in hemp and the form of protein most similar to that of the human body. Hemp protein is easily digested and assimilated, making it one of the finest sources of protein in the plant kingdom. As a crop, hemp is nitrogen fixing, making it beneficial to the soils in which it is grown in and is naturally pest resistant, requiring no pesticides in its production.

Great article. I love hemp seeds and I really hope the laws will change so we can grow hemp here in the U. S. I even learned something new about the form of protein only found in hemp that is closest to that of the human body. Thanks!

Thanks for posting this!

I love Hemp and I love Tim!! I am almost 50 and I hope to be as good when I am 70, like I know young Tim will be!
love deb
Wish the US would allow hemp farms here!

I've been using hemp powder in my smoothies. but i'll have to try eating the actual seeds. though, i think i get them in some products i buy from whole foods.