In 2006 Robert was selected as one of VegNews Magazine's "15 Most Influential Vegan Athletes", and is considered one of the most recognized vegan athletes in the world.? Robert's cruelty-free training philosophy and accomplishments have been featured in more than 20 international magazines, 200 websites and in television commercials for VegSeattle and PETA.

Co-founder of C-VEG, a Corvallis Oregon based vegan group, board member of OrganicAthlete and Northwest VEG, Robert's animal advocacy expands beyond personal convictions and deep into the global community's roots. Robert is the President of Vegan Bodybuilding & Fitness, is co-organizer of Portland VegFest, and is currently on an 18 month speaking tour presenting about topics including "Thriving On A Plant Based Diet" and "Careers in Environmental and Animal Activism". 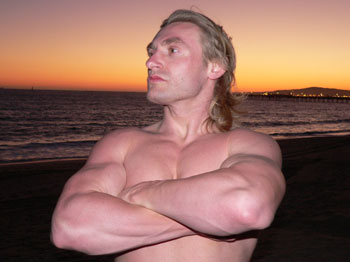 "In North America, we are taught from a young age to believe that the only ?good? sources of protein come from animals. It is proven by scores of scientific studies that plant-based sources of protein are easier for the human body to assimilate and plant-based foods do not come with many of the negative health implications associated with a diet rich in animal protein such as high cholesterol, high blood pressure and cardiovascular disease.

As a vegan bodybuilder, I compete in a sport dominated by meat eaters, most of whom scoff at the idea that one could get sufficient protein from plants to be competitive. I do not consume any animal products whatsoever, not even dairy or eggs. Instead, I get as much protein as possible from whole foods, often supplementing with plant-based protein powders to help me meet my target of 1.5g of protein per pound of bodyweight for building muscle mass.

Great commonly available plant-based protein powders include yellow pea, brown rice and soy. Though soy protein has been a staple in my diet for years, I have recently reduced my consumption of it because I am concerned about developing food sensitivities and/or allergies. Too much of a good thing can be detrimental to overall health and my feeling is that soy is becoming overly pervasive in vegan and vegetarian diets. There are so many good alternatives such as yellow pea, that I feel I don t need to rely on just soy protein powder anymore.

A high protein diet can be taxing on the liver and kidneys so it is important to drink a lot of water (I personally drink over a gallon a day) to help the body s organs process the large amounts of protein. As a vegan bodybuilder, I want to show others that it is possible to gain significant muscle and strength on a vegan diet and believe that a plant-based diet is one of the best things you can do for your health, and the well-being of our environment."