This weekend is Mother's Day, so today's Thankful Thursday is dedicated to the memory of my own mother, Elizabeth. 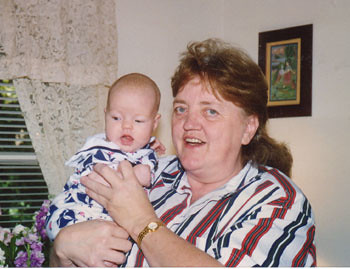 Elizabeth was born into a very large, but also very poor, family. Her childhood wasn't exactly ideal, especially with an abusive father who tended to switch from loving to nasty faster than anyone could hide. Her life was very controlled. Her father s temper was so fierce that even neighbors stayed away from him. He ruled the house by instilling fear into those he loved. I tell you all of this, because it shaped who my mother was as an adult.

My mother gave birth to four children (I was the second one born). When I was about four years old, she and my father divorced. He was never in our lives after that, so she was our sole caretaker. She explained to me when I was older that he was mentally abusive to her; he was eventually diagnosed with schizophrenia (he suffered from a very tragic childhood event, so who knows if he was truly schizophrenic or if he suffered from something related to that event). Anyway, she divorced him because she couldn't mentally handle his abuse any longer, especially while she had four very young children who needed her care.

I am thankful for her strong will. I can only imagine what my childhood would have been like if she wasn't strong enough to leave him at that time. Today, it is somewhat common to be a single mother---but, over 35 years ago it wasn t so common. She was an incredibly protective mother, which I think gave her the strength to make such a drastic decision in her life. I am thankful for her strength.

So, she raised us on her own. She loved us, truly loved us. I have no doubt about that. She played with us, covered us with hugs and kisses, tickled us, kept us entertained, played games with us, told us how much she loved us, and never let us know exactly how difficult it was for her to raise four kids on her own (she even took in one of our cousins to raise for quite a few years).

I am thankful to have felt her love, to be able to look back and remember her smile and laughter. I am thankful for the way she'd become child-like at times, how she'd play games and have fun along with us.

When we were younger, it was easier for her to pretend she was happy. We were young and needed her---so she did what she needed to raise her children. She hid her pain and loneliness; she gave up all of herself in order to help us grow in the best way she knew. Her entire identity was that of "Mother"---Elizabeth no longer existed.

I d love to say that even though it was difficult for her, she was a perfect and loving mother. That wasn t the case, however. Like her own father, she had a temper that was quick to surface without warning. She controlled us by instilling fear, or guilt, into us. She was abusive at times, and even neglectful at times (especially when she was suffering from severe depression). She said and did many things during my childhood that were deeply emotionally scarring. But, I don t hold any of it against her. In her own way, she always did the best she knew, and always loved us.

It's impossible to ever understand what she went through, how difficult it must have been for her. Her entire life was dedicated to being our mother. When she developed cancer about eight years ago, and was told she didn t have much longer to live, she cried a lot. She didn t cry because she was dying, however. She cried because she made mistakes as a parent. I think when she saw how we were parenting her grandchildren, when she was away from the stress of raising children on her own, she was able to see so many of the mistakes she had made.

In her final days, she asked for forgiveness. She played with her grandchildren in the child-like way she used to with us as children. She smiled a lot, gave tickles, and covered all of us with lots of hugs and kisses. She laughed her beautiful laugh that I will never forget.

I am thankful for having felt her love, and for all that Elizabeth gave up to be my mother.

Awww. I'm missing my Mom too. Darn. (((Wendi))) You are definitely someone who would make any Mother proud and I consider you one of the healthiest people I know. I think its important to just at some point in our lives, no matter how bad it was, to just accept the mix and tumble people who raised us and love even their flaws. There is so much beauty in chaos, and imperfection.

Have a great Mother's Day!

Thank you Wendi. You seem to find beauty in everything, and that makes you beautiful!

Someday, when I grow up, I will share my stories as well.

What a touching story of the realities of your life and a mother's love. Beautifully written. I have decided you are an angel among us. Your spirit is so full of wisdom and light and which you radiate to so many of us each day. You are a gift.

I agree with the the words of Yardsnacker, joanna, & Penni. And you truly are a loving gift to the world. In thinking of our mothers, I thought of this song by Celine Dion: http://www.youtube.com/watch v=j774h01b0v8

Your Mom sounds like an incredible lady. So do you. She must be very proud of you!

Happy M's day to both of you!

Hi Wendi Dee! Thanks for visiting my blog! I will definitely be answering your questions in upcoming posts. I haven't written about hormones in a long time!

This is a very touching entry... praise to your Mom for being so loving, and strong amidst some truly difficult hardships.

Lotsa luv back to you... thank you!

What a lovely and touching tribute to your mom. You are amazing for understanding her and loving her so much - she must've been so proud and blessed to call you her daughter.