I first heard about raw food in about 2001, from a website by a man named Chet Day. Since I have a background of studying Chinese medicine, I thought the diet sounded like a terrible idea: it sounded too cold energetically, and like it would destroy the digestive energy. We had been taught in acupuncture school that light steaming and cooking was best for all foods - even salads - if a person was "Spleen" deficient - tired, poor digestion, gas, bloating, possibly overweight.

At this point in life I had a personal reason to seek out healing diets: my daughter Molly was born in 1999 with severe brain injury. By 2001, she still had not developed and was unable to sit, crawl, talk, etc. She also had seizure disorder and had small seizures almost constantly throughout the day and night. I was still nursing her, and so had taken wheat, sugar and dairy out of my diet completely in case she was sensitive to any of these. 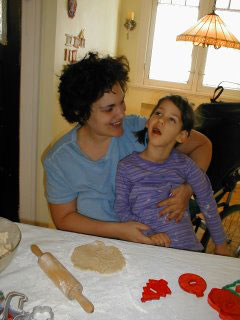 Despite what I learned in school, something kept drawing me back to the diet and soon I decided to try raw. Almost immediately I felt energy return (just the opposite of what "should" happen according to Chinese medicine!). I lost weight and felt fantastic. Now when I see an argument against the raw diet from someone schooled in Chinese medicine, I know that they are like I was, just speaking from what someone taught them, not from experience. Not to say this diet is for everyone, but when I hear some people trained in Eastern medicine putting the diet down, I just know they are speaking theoretically, and not from their experience.

And I have discovered that there are definitely ways to change the diet energetically: blending makes food easier to digest (as does proper food combining), and most greens are slightly warming, as well as adding things like ginger, cinnamon, garlic, and onions to food. Just eating foods at room temperature as opposed to cold from the fridge is great to help warm things up.

When Molly was three, I weaned her from nursing to try a special medical diet with her, called the ketogenic diet, to try and stop her seizures. This is a very high fat/low carb diet. The way the hospitals teach it: you feed the child measured glops of things like mayonnaise and tuna fish, with maybe a tiny bit tomato. To a hospital dietician, fat is fat, whether it's butter, margarine, coconut oil, avocado or blended nuts...it's just fat. The same with protein and carbs: you can choose to feed your child a sixteenth of a cracker or an entire head of lettuce....it didn't matter to them because a carb calorie was equal to a carb calorie. Most kids are so hungry on this diet with tiny bits of food. (They are only allowed a specific number of grams of fat, carbs, and protein per day, based on their weight.) Other negative side effects of the ketogenic diet include vitamin deficiency and dehydration/kidney failure. Molly, however, had large amounts of greens and healthy fats. We took what the hospital dietician taught us and gradually turned it into a healthy diet. Unfortuately, the ketogenic diet only works about 1/3 of the time, and Molly wasn't in that third. The really sad thing for me was that I had stopped nursing her, and after about six months it became clear the diet wasn't helpful, but Molly had lost the ability to nurse.

We tried many things with Molly, including the healthiest raw diet ever (which I documented at the time on a website called From Sad to Raw, though it's not up anymore...but I have it saved on our computer.) Molly did seem to have more energy and would sometimes roll, but we did not see real improvement in anything we did. However, for eight wonderful years she was strong, healthy, loving and happy. When she was eight, though, something was wrong, and we couldn't figure out what. She grew more and more uncomfortable. We finally turned to Western medicine for help, and I hate to say it, but I feel that was perhaps the fatal mistake. Our sweet Molly died after over a month in the hospital, in December of 2007.

Later that month I had a miscarriage (I had been pregnant when Molly died.) At this point my diet had reverted to "comfort" foods (lots of cooked foods including wheat, dairy and sugar - which don't really

comfort, do they ). Then four months later I had another terrible miscarriage, in which I hemorrhaged and lost consciousness. At that point I knew I had to make a choice of whether to live or die. I do have another wonderful daughter, so of course I chose to live. I stopped eating sugar right away, but somehow found it difficult to find my way back to raw. Then I heard about the Juice Feast which was already underway, so at the end of April, 2008 I jumped in.

My energy and strength began returning. My mood improved and I felt I entered the land of the living again. My juice feast lasted 42 days (6 weeks), and since last summer I've been mostly raw...whether that was 100% (which I did for 2 1/2 months last year...until the anniversary of Molly's death, when people came over and brought cooked food, and I decided to partake.) Now I am mostly raw, some days and weeks 100%, some less. The more raw food I eat, the better I feel, especially when that includes fresh juice.

My raw story is not over, it's a wonderful journey in which I am meeting amazing people, and learning so many things about myself and the world. I'm training for the Pittsburgh marathon, which I would love to do primarily on juices and green smoothies! I keep a blog in which I post a raw recipe every week (Mmm....Mondays), and on other days discuss different aspects of Chinese medicine and general health and wellness. We also have a monthly newsletter full of information, health tips and raw recipes. I hope you visit our website and blog, and sign up for the newsletter, it'd be great to keep in touch. Below you'll find my contact information, including our email address.

You can find out more about Melissa Sokulski by visiting the following sites:

Dear Melissa,
Molly was a blessed girl to have had you for a Mom. I know she must always be in your mind and heart every day. I am so glad you continue on the raw path. As one mom to another, my heart goes out to you.
Much love
deb

wow, what a beautiful story...I started to cry. Molly was truly blessed to have had you for a Mom - Debbie is so right about that. You are courageous to keep on your path, and to know that you are doing right by your other daughter, your family, and yourself...and to know that Molly will always be a part of you. Bless you and your family.
Peace! :)

My heart goes out to you, Melissa, knowing full well what issues family go through with brain injury having a brother of the same. Wondering if you saw the movie "First Do No Harm" with Meryl Streep about seizures and diet. This was the movie that started me on my healing journey which eventually led me to the raw food lifestyle.

Your daughter Molly was truly blessed to have you as a mother. And Ella is an absolutely delightful child! It has been a pleasure to meet you at several of the raw food meetups in Pittsburgh.

Thank you for sharing your journey with so many people.

She has become so thin. Juice diet worked for her.

Juice fast diet is very effective. It helps to loose weight easily if one follows it religiously.

She lost so much weight. This is something very great.

I would just say one thing to you and that is, ?FANTASTIC !! Keep it up and wish to get more details from your blog.
regards
charcoal grill