Why Not Have Dessert for Dinner?

Let's take a quick look at a few dessert pictures, then compare and contrast, shall we First up is a small slice of some normal pastry: 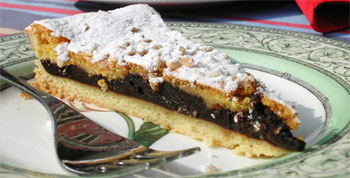 Looks sinful, right It seems to proudly display its bready crust, its gooey chocolate center, some sort of butter-rich top layer coated with lovable little bits and bobs, and a liberal sprinkling of confectioner's sugar to make the whole thing cute as a wintry scene from one of those holiday specials hosted by the claymation likeness of Burl Ives. I'm sure it's delightfully rich, too. A tad small, though, eh ? It's probably all anyone can take of such decadence without worrying about clogged arteries or putting in extra time on the tread mill for the next three days.

Hmmmm.... Well, let's take a look at another dessert: 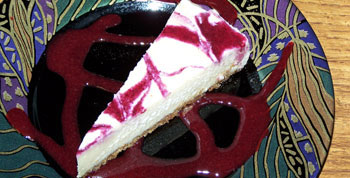 We haven't exactly focused on raw desserts here on the Pure Jeevan blog, so there wasn't a huge backlog of pictures we've taken to feature here. But, Wendi's raw cheese cake seems like a good example to discuss here. Now, admittedly, we're not pro photographers, and didn't stage that photo as well as a pro might have. But it still looks pretty good, we think. If you didn't know it was raw, what would your reaction be

These days, with the talents we've seen in raw cuisine books and on many leading gourmet raw food sites, it's arguable that we could have presented two nearly identical pictures -- one cooked, one raw. That is to say, with some time and patience, many raw food chefs are now presenting desserts that absolutely rival (and sometimes even surpass) their traditionally cooked counterparts in terms of plate-appeal and the accompanying mouth-watering response from the viewer.

In fact, there's just something special about being a raw foodist and seeing a perfectly executed, sumptuous raw dessert -- something that goes beyond what your response to gourmet desserts was before you were raw. Beyond the eye-popping "I want that" reaction, there's an undeniable newfound sense of awe in the appreciation of it. Do you feel that, too, when you see some amazing raw dessert presentation?

But, WHY are we so excited ? What's the big deal ?

Well, for one, raw foods are GOOD for you! They contain no refined cane sugar, no artery-clogging dairy products, no dead, nutrient-barren calories. Raw foods are ALIVE, brimming with all of their original nutrients, enzymes, and life-force. And so you see there's no guilt involved -- even in the desserts. Yet, even for long-time raw foodies like us, it still sometimes feels somewhat indulgent to have that extra slice of pie or that second bowl of ice cream. Weird, isn't it?

Well, we feel it's high time we all get past this conditioning! To this end, Pure Jeevan invites you to follow our lead sometime very soon:? Instead of having a "normal" raw dinner, we want you to make yourself a huge raw dessert for dinner!? Anything you like -- a raw cake, raw pie, raw cookies, raw ice cream. Just make sure it's a dessert. And no, smoothies don't count. (We already have those for dinner quite often.) For this, we're calling for something more ...desserty.

Are you hesitant ? Are you new to raw, still losing weight, and thinking, "But, won't I stop losing weight if I do this "? Our answer:? Probably not!? At least, in our experience this was true. While we were in the process of watching our "cooked food bodies" melt away, we often had dinners consisting of nothing more than "raw fudge" or raw carob "milkshakes." Still, the weight came off, the health conditions healed, the spirits lifted. Why ? Because we were (and still are) eating foods filled with life.

Here's a link to get you started -- this link goes into the desserts-only section of the All Raw Directory's Raw Recipes category. There are direct links there to well over 200 raw dessert recipes. In the comments section, let us know what you're going to make yourself for a sweet dinner sometime soon!

i had a chocolate strawberry milkshake for dinner last night!

whats the recipe for the chocolate milkshake...sounds good

One thing I have noticed since looking at the raw desserts...they are totally beautiful...vibrant colors, good ingredients. I am trying to get my sister a little more involved...how can a person say no to such wonderful all natural treats ??

My husband says raw desserts are the gateway drug to get people to try raw. He's a carnivore and even he will eat my desserts!

Drooling over here!! I am now using Google Chrome as my browser on my new laptop and now I can read your blog so easily!! I'm back!!!

My carnivorous husband (reluctantly) agreed to go raw for 30 days. He is doing it for the month of September - apple season here in Vermont. I think on the first day I will make an apple pie for dinner. We'll see where that leads . . . :-D

I had a strawberry shake the other night for dinner. Wendi made a huge pitcher of it for all of us, and then I was the only one who felt like having it. So, I drank it ALL!

Talkindrum- If you're on our mail list, you'll be getting a great raw chocolate shake recipe via email! If you're not on the list, just sign up at: http://www.purejeevan.com/newsletter.html

Kandy- Yep, that's one of the best ways to get people into raw. It worked for me, too! Wendi kept making all of these delicious, guilt-free treats.

My experience exactly. I think even hard-core junk-foodies do appreciate the guilt-free nature of it all. And then slowly they become more health conscious.

Cool! I've been meaning to give Chrome a try. The web geek in me is very glad to hear our site works well on it!

Hey Robin- Wow, I just left a long reply and it got zapped into the aether... Anyway, I was just saying how great apples are in terms of their versatility. You can make pies, applesauces, put them in salads, juice them, etc. A great "Jay the Juiceman" recipe is to juice 4 apples with one lemon. Super tasty & refreshing! Is your husband planning on transitioning at all, or is he just going to jump in 100% raw for September? Let us know how he likes his experience! -Jim

He's going to put himself in my hands and I can do whatever - so I'd appreciate ANY advice you have to give me.

He (at this point) has NO intention of ever being raw on a daily basis. But, who knows what the future may bring . . .

True... you never know what's in store for the future. If you'd have told me even when I *first* started eating raw that I'd eventually be 100% raw, I'd have said you were nuts! I didn't think there'd ever be any way I could give up bagels and chips and breads. But slowly, I saw the light and felt the difference for myself. Now I couldn't envision returning to that weighted-down lifestyle. I feel too good and have too much energy these days compared to my "old" self! (I like my new "young" self!!)

Keep in mind, of course, that raw desserts *can* also be rather weighty and filling. So, use *some* moderation. Do a lot of salads, smoothies and fruit dishes -- all great transition and everyday raw foods. Some people also like raw goodies like cacao -- usually a very popular item among non-raw people. In all cases, check the All Raw Directory (www.AllRawDirectory.com) for great recipes and inspipration.