The Joys of a Simple Salad

A few days ago, we'd mentioned that Wendi had done a five-day water fast as part of her early dealings with Lyme disease. This was the first time I can recall in our household anyone fasting for more than a day or so, although there may have been the odd juice fast now and again for a few days.

Thinking back, I can tell you that, all while I kew Wendi (and especially during her cooked years), such an extended fasting would never have happened because she used to get wicked headaches any time she went without food for more than a normal time period between meals. This makes perfect sense, of course, as you really do have to be in fairly good health to successfully fast -- and, during those "cooked" years, we were both extremely unhealthy! (More on the reasons for all that later, as Wendi will likely do a write-up on fasting at some point.)

When it was time to come off of her water fast, she said she'd like to start with juices for a day or two, and then introduce simple foods once again. So, we began with cucumber-celery juice, which she drank exclusively for a few days.

It turns out that cucumber-celery juice is in fact a nice, gentle food with which to restart your digestive system after a fast. My only tips for that would be to juice the cucumber first, as the celery's fibrous strands tend to tangle up in your juicer. (This is true of any juice recipe containing celery. So, always juice your celery last!) Also, as an option, add a pinch of salt for some additional palatability, and to bring out the subtle flavors.

After a few days of this, we moved on to simple salads. And, when I say simple, I really mean simple. Here's the recipe:

(Naturally, everything should be organic -- and that's especially critical after a fast.)

As for the "guts of the cucumber" item, let me explain... You see, at first, Wendi found normal cucumber flesh too heavy for her system. However, she thought that the middle part of the cucumber -- the part with the seeds -- would be tasty and also easy on her digestion. So, we began including the "guts" in her salads, and it became a fun part of making them. 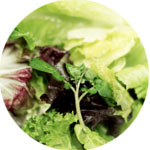 In preparing them, I would usually peel the cucumber and then slice it longways. Then, I would walk up to her as though I were a waiter in a fancy restaurant holding one of those ornate pepper shakers. Only, instead of asking, "Would you care for freshly ground pepper ," I'd put on my most snobbish, haute-cuisine-restaurant-waiter voice and say, "Cucumber guts, madam "? Then, only after she played her role by indicating to me in her most appreciative tone, "Oh yes, thank you!," I would hold the half-cuke over her salad bowl (as though it were a pepper shaker) and then scrape the cuke guts out over her salad with a dignified upward-stroking motion using a metal soup spoon.

When finished, each cucumber half would be hollowed out like a mini-canoe. So, I'd save all of those to use later either for juicing or for stuffing with various things for impromptu raw sandwiches.?

Quite surprisingly, this simple salad has really "stuck" here. It turns out, it's not only a tasty salad with which one can break back into solid foods after a long fast, but it's also quite honestly delicious. So, here we are a few weeks later still rather enjoying this particular salad. As such, the take-home message is this: Food need not always be elaborate; don't overlook the simple things.

Jim, you are SO right. Simple is how I fly and more and more, the complex raw foods just turn me off.. and make my tummy work overtime. I love a simple smoothie, juice or salad or just a piece of fruit.
You are such a great hubby and true friend to your darling wife.
She and KD Cat are blessed to have you!
Deb xoxoxo

Jim, you're so funny! I laughed reading your pepper shaker comparison :)

Hello Jim and Wendi,
This morning I was looking through my animal spirit guide, for a lion as I saw one this morning in a shadow on my window, anyway I came across a page that had Lyme Disease on it and the animal spirit that related to that was a tick the comments were ticks were to do with relationships.
I don't know whether that information will be of use to Wendi and yourself, but I thought I would let you know anyway.

Deb, you are so right about how awesome Jim has been. He's been doing everything I haven't been able to do on my own (which has been a lot most days)! He does it all with love and a smile, too!! :-)

Your blog is one of my favorites, Penni. I'm behind in reading lately, but I'll be catching up soon!

He really does that, too! It makes me giggle...and he's a super cute waiter! ;-)

Thanks for your comment. One thing that has definitely been very clearn since I've developed Lyme Disease is that my relationship with Jim is a very loving, supportive one. He has been lovingly helping me with anything and everything, never complaining at all. :-)