When Others Are "Concerned" -- Part Two

So it's time to continue that discussion on the aforementioned fringe one percent -- those people who will not accept your conscious intention to pursue your own health via this path. Please keep in mind during this discussion that we're only discussing just that one percent, not people in general. So, this is, I hope, relatively rare.

To begin, I'd like to stress a few points:

What happened to Wendi, and by extension to me and to KDcaT, is something I wish on no one. It' my sincere hope that what I'm describing as a fringe 1% is just as rare as that. In other words, I'm trying to shed at least a modicum of optimism on this rather unhappy post. Still, it's necessary to cover, so let's get to it.

We once had a close group of friends here in Pittsburgh, pretty much as close as anyone can get -- did the whole group vacation thing, camping trips, sleep-overs for the kids, dinner meetings, holiday hang-outs, the whole nine. On the whole, it was wonderful to have friends that felt like family. Our kids grew up together more like siblings or cousins.

I'll skip the ugly parts. In brief, raw proved too much for our relationship with those people, ultimately leading to a complete, highly painful and permanent falling out. The details are simply too unbelievable to recount here, but I'm still absolutely shocked by this, as our friends always seemed remarkably accepting. Whether someone was gay or vegan or lactose intolerant or pagan or whatever ... it was one of the more accepting bunches I've ever encountered. Ever.

Naturally, you ask yourself, "Why " And once again we enter the murky waters of human psychology. So, it's all theoretical from here on out. Instead of focusing on our example case, as described above, let's generalize: Why would someone in your life absolutely reject your dietary choice -- even after you've explained it to them nicely as I described yesterday -- to the point of active, intense, in-your-face opposition

I'll first share one possible reason, although I suspect it's not the true explanation (which I'll get to in a moment). But, it is at least possible that you're simply running up against 100% diametrically opposed convictions held by the other person. For example, imagine a person who, for some reason unknown to us, believes with all of her heart that eating exclusively raw food is simply wrong, on par with some unforgivable "sin against humanity" or something. She may well feel it is her duty to stop at nothing in convincing you otherwise. Okay, that's at least within the realm of possibility. 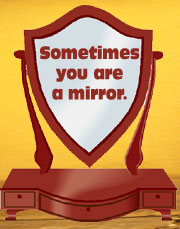 But, here's another:? You become a mirror. Your new health and vibrancy is in fact so remarkable, so reflective, that people intuitively begin to understand what they're doing differently -- only they're too ingrained at the moment to consider changing the practices that they now understand as unhealthy. I see this time and time again in the world. I believe I alluded to it a few weeks back when we were talking about live blood cell analysis, a controversial field. Where does the controversy stem from, though? Could it be the "mirror" that vegans become when their blood is scientifically proven to be healthier than the blood of those who follow poor diets ? How should we, as vegans, regard that fact ? Not smugly, I hope... but should we be ashamed of it? Proud of it? All rhetorical questions...

And so what happens ? You start off morbidly obese, thankfully accepted (perhaps even enabled, sustained) by your friends as such. But then you magically become healthy before their eyes. Pounds effortlessly fall away, old health concerns dry up an leave you, you acquire a glow and a vibrancy, a lighter existence, looking and feeling and acting younger than before -- all from the "radical" choice that you followed of your own determined volition.

Sadly, eating more fruits and vegetables is just too much for some people to bear, even some of the more ostensibly accepting people on the planet. And so the addiction they have to their lifestyles and food choices can actually manifest as bitter jealousy.But, I've thought too much about it now to still feel the sting of their vitriol (although I admit that I'm still upset about certain aspects of the whole thing). In the end, I'm conforted that the same solution to my own physical well being (which trickled down rather pleasantly to mental, emotional, and spiritual well being) is also available to them -- and I can only lovingly hope that they find it someday, too.

Great comments Jim,
I look at all situations that come across my path as part of my journey to better health.
And it is up to everybody make their own decision but it is a shame that people just can't accept others as they are.
But that is the problem with the world why we have so many wars and displaced people but that's another story.

Anyway Jim thanks for reminding me that I can and will expect more of me on my journey.
bye
sheryl
canberra
australia

Great post thanks. I have been surprised at some of the reactions I have gotten as well. It's more the reaction I would expect from stating that I have decided to start using street drugs, then eating whole raw foods. So mostly I keep things on the "down low" and if/when people ask me, I give information without trying to convince.

It is so like coming into a deeper faith that it really surprises me. I wonder you know, I am new to all this stuff, but I wonder if someone running along on a lower frequency reacts negatively to someone on a higher frequency. I mean, when you are on fire for your faith, people who are not think you are a nut, but you just feel so happy. When you are blissful and happy after a detox and really exited and into it, people, think again, you are a nut job.

So assuming that we really do emit different frequencies as I've read about, maybe some of the negative reactions aren't so much personal choices by others to be mean as they are natural reactions, like water skipping off a hot pan, or the same poles of magnets pushing away from each other. So then the question is do we lower our frequency on purpose (if it is even possible) to promote harmony with others on that frequency, or are there other techniques to get around the natural reaction

Personally I try to keep my frequency high, but try to keep it internal, not make it too obvious or overbearing, especially in certain situations. Yet, in other situations, such as dealing with strangers, I find that letting the love spill over seems to get quite a positive response most of the time. I think people are really hungry for love.

hmmm... Lots to think about. Thanks again for a great post Jim.

Jim, that is an astonishing post! It is wonderfully written and expertly expresses what a lot of us deal with. It is astonishing that choosing to feed yourself primarily fresh fruits andd vegetable should be thought of as being radical and dangerous. It sems perfectly rational and sane to me. Eating a half dozen donuts seems radical and dangerous to me, but if you eat half a pizza and washed it down with a Big Gulp you "in with the crowd". Bizarre.

Your posts are really great to read.

Best to you and your family.

I'm so glad I came to your blog and read the second half of this today. This is exactly my biggest fear. Losing loved ones over food choices.

I'm from a big family. Yes, they are all diabetics, but not me. As women, we all used to sit around talking about food and diets, what worked and what didn't (they all didn't) and how we craved things. Then we'd all go into the kitchen and collectively create a feast. Then we'd all eat, . . . and eat, . . . and eat. We'd talk about the food as we were eating it.

I just went with it on Thanksgiving. I only ate about 10% raw that day, and yes, I ate more fruit and salad then anyone else in the family.

It's so hard for me to handle the comments I get, the sabbotage I get from people who don't want me to do this, and the frustration that I'm such an outsider when I actually stick to my RAW GUNS and eat completely different than they do.

I can't take losing anyone over it right now. But it seems that as time goes by they are more willing to accept me and leave me alone as I eat my cucumber and zuchini fries while they eat their french fries. I pray they don't "leave me."

Its nice and quite, no people leaving stupid comments or having bullshit discussions.
its just a good blog to get your latest information in design/art world.
keep it up