One Step Closer to the Return of Truly Raw Almonds!

"I sent out over 100 emails, now, and have been corresponding with the chair of the almond board. He s an ass."

~Wendi, writing a few years ago in her "Almond Frustration" blog post.

Jim here again... Wow, that's an excerpt from a very fired-up Wendi, writing a few years ago about her frustration over the USDA's absolutely insane regulation that nearly all almonds sold in the United States must be treated with chemicals or heat prior to sale. I'm sure you know the story by now, so I won't rehash it here. (In case you do not, you can read about it in our original post, Wendi's Almond Frustration post (which even recounts a disturbing, related dream she had about this issue), or our last update post. It's an issue we've been following for years here.)

We received great news today from our fellow raw almond-loving friend Tonya Kay that the almond growers will finally be allowed to take their frustrations to court! The Cornucopia Institute has the story, so be sure to check it out! Here's a snippet:

Attorney John Vetne, who has been representing the almond farmers, said the Appeals Court made a ?very strong decision affirming farmers? rights. The USDA had been arguing that farmers did not even have the right to legally challenge the USDA regulation. ?We are pleased that the Appeals Court rejected USDA s argument that courthouse doors are closed to farmers. We now intend to demonstrate to the federal district court that USDA acted outside of authority granted by Congress when it denied California almond growers a consumer market for raw almonds,? Vetne added. 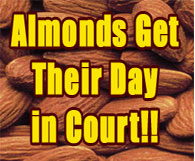 This is super-great news, of course. It's also interesting in that yesterday's post here offered some of our views on consumer safety with respect to food. Much of this case centers around that theme, at least ostensibly. The USDA's official position is that it's in the best interest of consumer safety to irradiate and or cook all almonds -- which is ridiculous, of course, and clearly misguided at best. At worst, it's at least worth considering an agenda altogether more sinister, along the lines of absolute control over all food grown in the country. But we'll leave the conspiracy theories for other venues (for now), as that's really focusing on the negative and, to be truthful, we'd rather focus on the positive.

With that said, we positively and passionately believe that all people should always have the right to grow and/or purchase 100% organic, untreated, raw fruits, vegetables, nuts, and seeds. This is something we're willing to stand up for at all times and, when challenged, we might just go on record with more than a little frustration. After all, most of you out there know Wendi personally. She doesn't often publicly state that someone is an ass. You kind of have to do something monumentally shameful -- like, say, ruining every almond in the entire country -- to draw that kind of public response from her.

So, let's all keep our fingers crossed for the success of the next step in this saga. It'll be nice to be able to easily and confidently order up delicious almonds once again without having to resort to the sketchy black market of nuts that everyone in the raw food community seems to have connections with. (Although, it is kind of mischievously fun to bootleg truly raw almonds these days.)

(By the way, if you're wondering if the almonds in your home are truly raw, here's an easy test you can try to help determine their raw/cooked state!)

you wrote "...all people should always have the right to grow and/or purchase 100% organic, untreated, raw fruits, vegetables, nuts, and seeds"