Some Thoughts on Opening a Raw Foods Restaurant -- Part I of II! 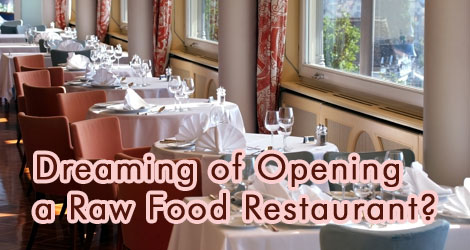 As raw foods enthusiasts for many years, Wendi and I have had the pleasure of patronizing raw food restaurants literally from coast to coast. Between us, we've been blessed to have sampled a more diverse spread of raw gourmet foods than have most people. (We hope that many others get to do this as well!)

From time to time in anyone's raw journey, it seems inevitable that thoughts crop up about opening a raw restaurant. For some, it's likely no more than a passing fantasy; for others, it may well become a firm business goal. We believe this is a fine and noble goal -- one that we'd like to see more people accomplish!

We realize that, as *patrons*, we're probably not exactly qualified to produce a thorough business plan for your consideration, specific to raw foods. But, we nonetheless have a few thoughts to share on the topic. (So, we welcome responses to today's and tomorrow's posts by any of our raw food restaurant owner friends!) 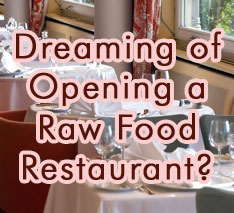 Fortunately, regardless of what niche a business ultimately establishes itself within, all of the standard rules and best practices of business planning, ownership, and operation also apply to raw. So, all of the general resources available online are recommended. But, specific to raw, here are a few additional considerations, presented in two parts.

These aren't meant as comprehensive or exhaustive, but we at least wanted to start the ball rolling with a solid half-dozen raw-specific business notes for consideration. Today, we'll provide 6 potential challenges you'll face versus cooked-food restaurants; tomorrow, we'll offer 6 potential advantages you'll enjoy over that group.

Part I: ?6 CHALLENGES You May Face When Opening a Raw Restaurant (not in any particular order)

We're sure there are other raw-specific challenges (and even had a few in mind). (And, by the way, we purposely refer to them as "challenges" instead of "disadvantages" or some other negative term.) But, thankfully, the success of many raw foods restaurants means that answers exist to these challenges.

Tomorrow, we're going to list 6 things that we imagine present wonderful advantages that raw foods restaurants have over their cooked counterparts!