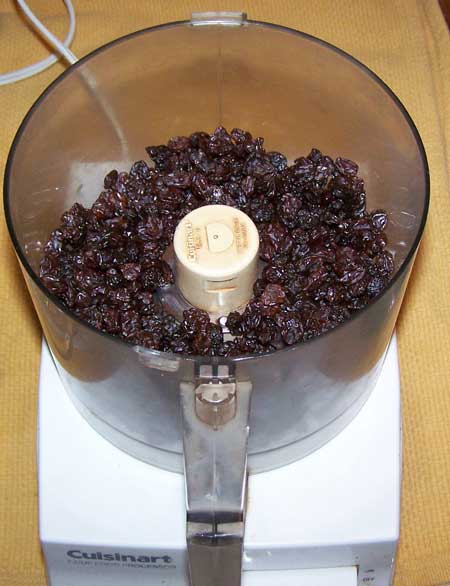 ?Next, toss in about a cup (or so) of raw walnuts: 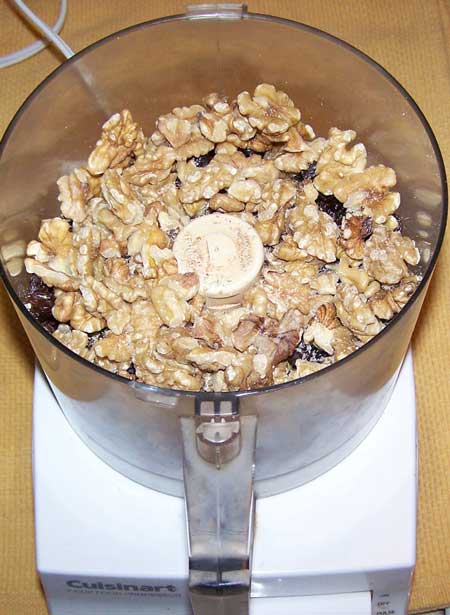 ?Then add some pecans if you have some. Maybe half a cup or so. (Obviously, precision is not the most important thing here!) 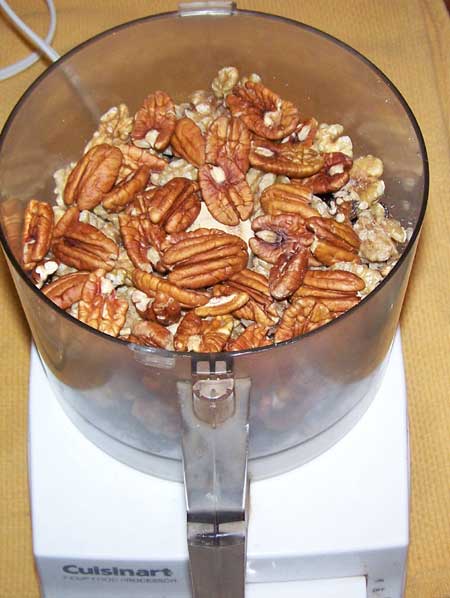 ?Now you'll need to put in some raw agave nectar: 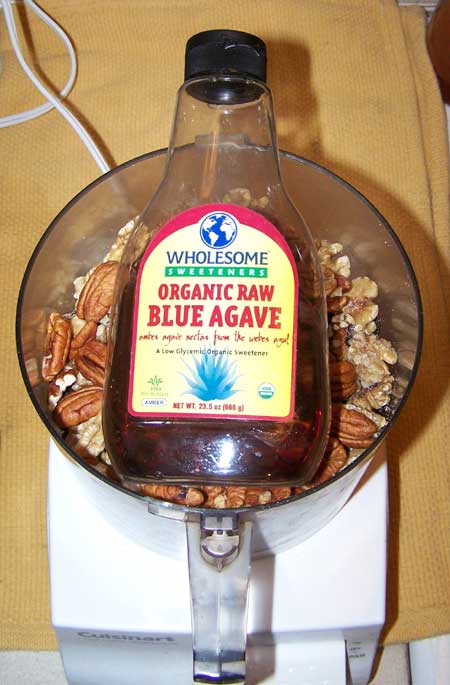 Not too much... Just give it a good solid drizzle, circling the food processor bowl five or six times. The purpose is not so much to add sweetness as it is to help these brownies stick together after processing. 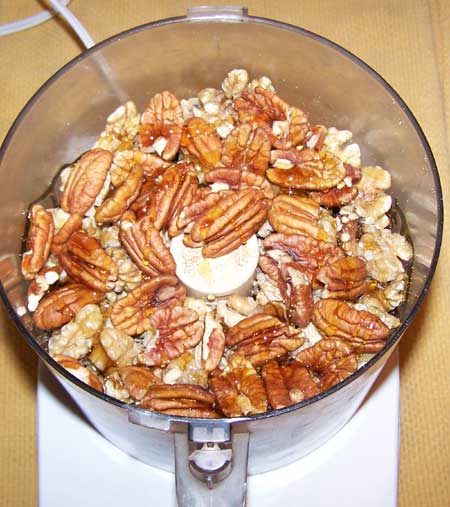 Some other quite optional ingredients are shown below. For this particular batch, I'm using cinnamon, orange oil, and a dash of salt: 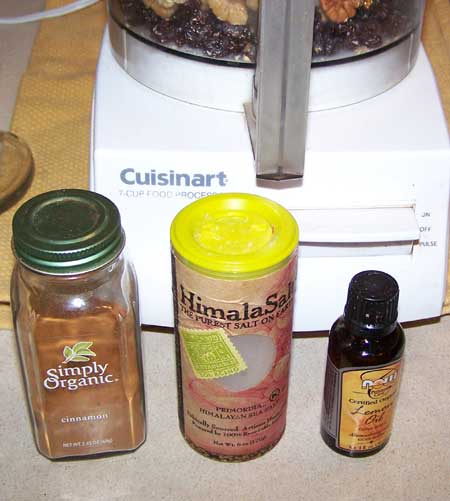 ?So, give it a healthy dose of cinnamon. Maybe a tablespoon or so. 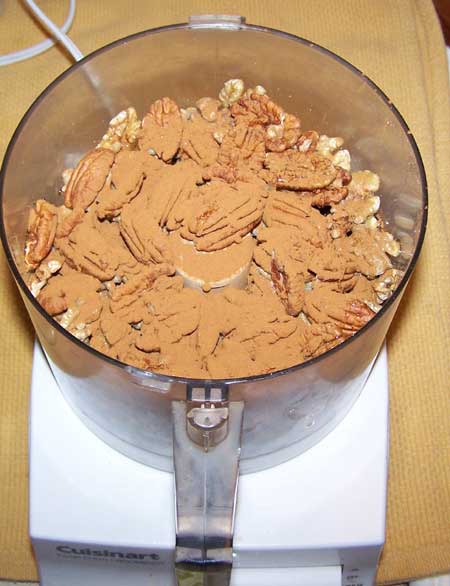 ?I also like to add raw carob. Here's a snapshot (although I'm not sure if you'll be able to see into the jar so well). I usually add about 2 tablespoons. 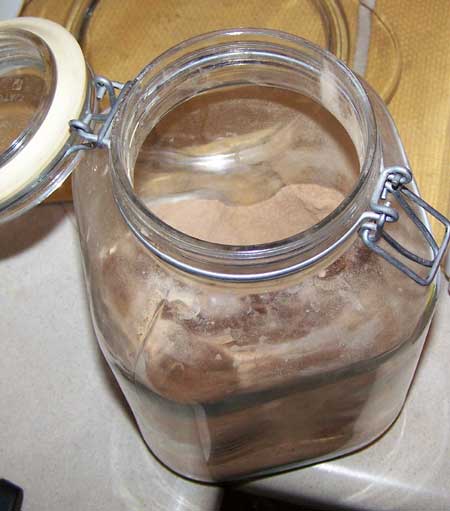 Here's a shot of the carob powder going in. It's tough to find raw carob powder, btw. Most stores have roasted, but we special order ours online. 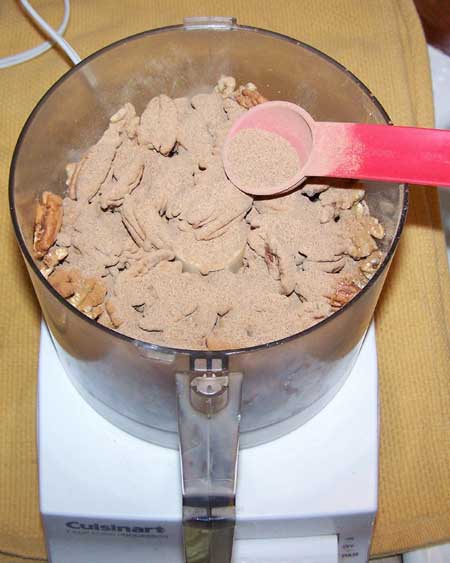 Oops, I showed lemon oil, above, didn't I ? I meant to show the orange oil. Here it is! 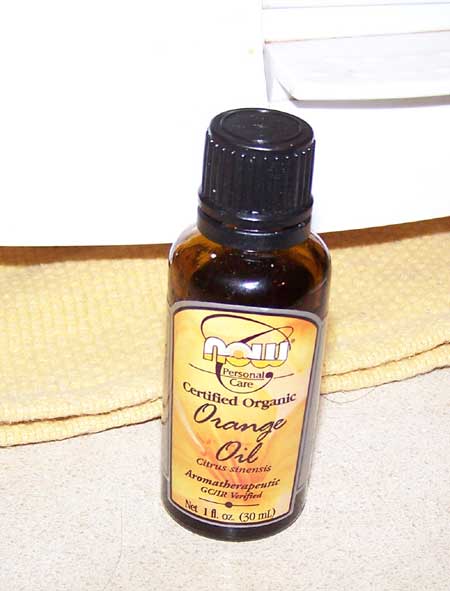 Now you want to process it for a few minutes. Add the oil as you're processing, as that seems to help it mix in better than adding it all at once. We've been experimenting with the oils. With something like peppermint, you can definitely taste it with as little as 4 drops. However, we've eaten these with as much as 15 drops. (Note:? When we use peppermint, we omit the cinnamon.) Here's what it looks like after processing: 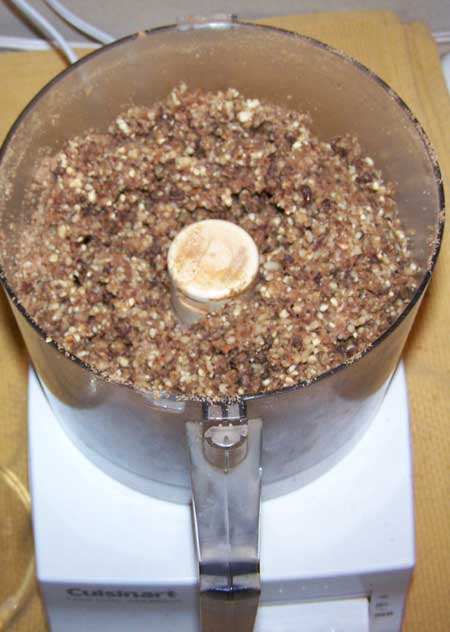 ?Now pour it all into a dish: 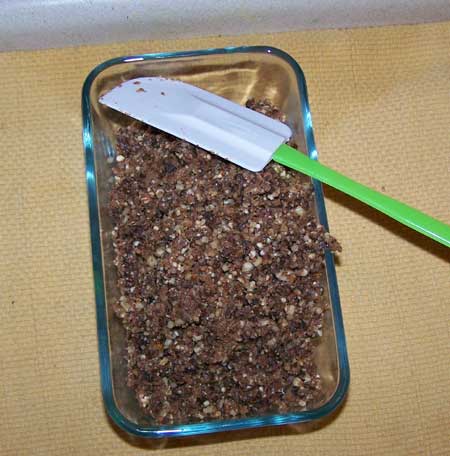 ?And then use your spatula (or another dish) to smash it all down. 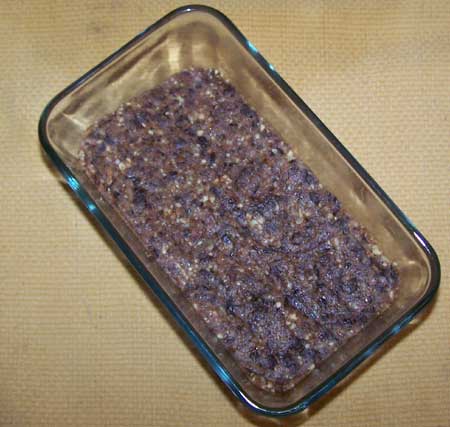 Then cut into brownie-sized pieces and enjoy!? They're rich and delicious. And very good for you! 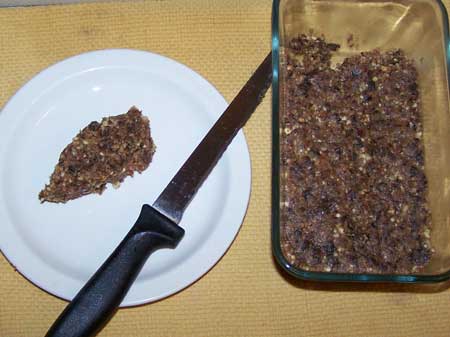 Mmmmmm, those look so good. I'll have to get some of those oils. Yum. Thanks for posting, I love the pictures.

Hi, Melissa. I recommend the peppermint oil over the others if you are only going to sample one of the flavors. It's my absolute favorite!

Jim took the pics and posted the recipe, so I'll be sure to let him know you enjoyed it. Let us know if you make his recipe.

i just made it, and it's very tasty. I put in some rind of an organic orange instead of the orange oil, which i didn't have anyway. my batch had a lot of agave so i put it in the freezer and hope it will solidify so i can cut it into squares. thank you for a clever recipe!

Made a tiny batch in the coffee grinder, only had pecans though. Made little balls rolled in coconut. I overdid it a bit on the citrus oil, lol. Def edible though! :D Thanks sweets!

oh that looks divine! my birthday's this coming Friday and I'm looking for delicious cake-y recipes...when I saw that this was brownies....ooh YUM!

Did you sign up for our free eBooks? There's a delicious brownie-like ice
cream cake recipe that we've given out as a bonus a few days after the
eBooks are received. :-)

Happy birthday to you!

You are very welcome, Marina. Jim absolutely LOVED making these all the
time. I hope you enjoy them if you decide to make the recipe!

I have a question
Do u soak the nuts first
Giselle

Even though soaking nuts is best, we don't always do it. We've been
gaining tremendous health benefits without soaking the nuts, but do know
that we could gain even more benefits by soaking them. ;-)

I hope you love the recipe!

Looks super yummy and I'll be trying it ya'll :)
Thanks as always!

Thank you very much for this recipe.The step by step pictures are great.I love your emails and I appreciate your warm and friendly personality.Your passion really comes through.I will be making this recipe with raw cacao powder instead of carob because carob makes me nauseous.I will also add a little bit of raw coconut oil so it will slice easily.

these "brownies" look wonderful! shall have to give them a try!

meanwhile, wendi, is the recipe available anywhere for eggless salad?

Thank you for the tasty brownies

just made it for breakfast! yum! veeeeery tastyyyyyyyyyyy!!!

You are very welcome, Pat!

Greetings all the way to Germany!

I'm so happy you made the recipe and enjoyed it!!

This recipe looks great. I am a newcomer to raw and have been managing to be 50% each day without much effort. This recipe looks and sounds yummy. I am loving the raw food. I have been vegetarian most of my adult life but since changing to green smoothies and alkalizing my body I am actually craving raw food instead of bread and other grains to fill up. I have loads more energy and a much more positive outlook as well. I love your recipes and your enthusiasm. Thanks so much for sharing your story and all the great advice