Jim here... Yesterday, we talked about exceptions -- those non-raw food items that raw foodists sometimes allow themselves to eat. I listed mine, and a number of people here and on Facebook noted some of their own. (Seems a lot of us enjoy olives, by the way!) It struck me today that a natural follow-up to a list of exceptions would be a list of non-exceptions -- basically a list of things I personally never ever ever ever consume.

This makes sense, right? I suppose all people generally have three basic lists: (1) those things we eat regularly, (2) those things we eat sometimes, and (3) those things we never eat. Hopefully, none of us keep these lists etched in stone, as diets are dynamic things that tend to evolve over time. A few of the items I'll list below may only apply to my current practices, while others (like refined sugar) I hope to permanently exclude. So, let's see:

Microwaved food. Wow, I really went through a nuke food phase years ago. For years, my daughter and I would chow down on Amy's organic bean burritos daily -- freezer to plate in minutes! You know, I may be eternally young now, but I admit to being old ?enough to remember when microwave ovens first came out. Let me tell you: They absolutely freaked my grandmother out, and we all thought she was nuts for regarding them this way. But, who knew... Grandma was right! Hey, I'm no Luddite. You want to bring me a new computer to use? Bring it on! ?But, where my food is concerned, I'll stick with leaving it the way it comes from Mother Nature. Raw food: No technology required. 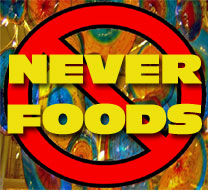 Refined sugar. I just can't do it. We've invested too much time into studying diabetes over the past few years. Maybe a Coke would taste pretty good, but I just couldn't enjoy it knowing what it's doing to my body. I think I had two or three throat lozenges last year that had some sugar in them. But, that teaspoon or so is nothing in comparison with the upwards of 150 pounds of sugar many Americans ingest each year! If my list of Never Foods here seems short, just consider how many thousands of things I'm ruling out with this single line item!

Meats. As far as I'm concerned, I never wish to eat meat again. I know there's a trend in certain enclaves of the raw community about this, but it's not for me. Regardless of what it tastes like, or what its health merits may be, or what its health risks may be, I've been at a point for at least two years now where I want no part of it purely for personal, ethical reasons.

Dairy. While I also do not consume dairy at the moment, I admit that that decision is mostly for health reasons. However, I think I would be open to dairy if I thought that my body would benefit from it. Right now, though, I'm enjoying a healthy vegan existence. I should note that, if I did ever decide to consume dairy products, I would definitely strive to source organic products, and if possible nothing from a huge factory farm.

Alcohol. I know that the body regards alcohol as toxic, yet many raw foodies do enjoy wine from time to time. Certainly, we've all known old people who have had wine and/or other alcoholic beverages their entire lives. We've all read about the supposed heart benefits of moderate alcoholic consumption. So, my decision to abstain from it isn't so much health oriented as it is my desire to largely avoid that consciousness (for myself). ?I added that parenthetical because it doesn't bother me at all to be around others who are drinking. In fact, it can be very entertaining to be the sober guy for a change. :-) However, as I've said before, it's always been a dream of mine to go into a pub in the U.K. and have a pint or two with the locals. So, I'll probably do that someday. (Maybe I'll blog about that. Until then, give me a club soda and a wedge of lemon -- and keep them coming.)

Breads. You know, I never had a digestive issue with wheat, as do so many people. Blame my heritage, my O-positive blood type, whatever... I used to eat bagels by the dozen, and always had bread around. But, looking back, I do think it had an addictive quality. Maybe I was really tuned into the whole opiate-releasing qualities of wheat gluten. And, I strongly associate my nonconsumption of breads to my weight loss. I know there are some scary studies out there -- acrylamide and so forth. But, I honestly still don't view good quality bread as particularly evil, at least for those who can handle it. I just happen to like my 160-something pound self a lot more than I did my nearly 240-pound self. This is my primary rationale for staying raw, although there are certainly other reasons as well.

GMO foods. Same here. I do try to stick with organics where possible. And, where it's not possible, there are things that I'll almost never eat if I can't get organic. But, living in this time, it's probably tough to absolutely avoid this, although one can try. I might say something similar about overly hybridized produce, although avoiding that is even tougher.

Mushrooms. They're fascinating ... but disgusting (to me).

Funny, I did not include "cooked foods" on that list, did I? ?I guess maybe I'm not against cooking as much as I am simply for raw. I feel as though I've forgotten some hugely disgusting type of food on that list, but I suppose it's complete enough. What do you think? ?Have I left off anything important -- and major Never Food?

I'm so new to this (less than one year) that I don't want to scream any restrictions. But, . . . I ate a RAW egg - fresh from the free range local farm chicken - in a smoothie once as part of my new RAW. NOPE. I won't be doing eggs again, ever. I broke out in eczema, which had been completely cured for months. It was amazing how obvious it was to me that this was a reaction to the egg. The first little spots appeared within 3 hours, for the next three days it was growing and getting itchy. After three days it started to heal, but took 2 weeks to go away again. No more eggs. If I can't eat them in their most natural state from well cared for hens, then there is no way I'm eating them from agribusiness hens and cooked!


I was eating dinner tonight and I was thinking about my "never" foods - Let's call them "INVENTED" foods.


I'm not simply talking about processed foods. Many foods can be processed and still retain their identifiable parts, or some semblance of normalcy. Salsa is processed. So are smoothies. Hell, if you're not a raw foodie, and you're into canning tomatoes - the end product is still made with regular items from your garden, and isn't all that far off from what you started with.


I'm talking about things like Doritos and Gummy Bears. Any "food" product that is just flat out "invented" in labratory. It typically takes 3 ingredients to make tortilla chips - corn or flour, oil and salt. Doritos have 39 "other" ingredients - most of which I neither can pronounce, nor have any clue what-n-th-hell they are.


Anyway - then I painfully realized that my "never" and "sometimes" foods are the SAME. No, I don't eat Doritos (ever, ever, ever). But, I DO enjoy an occational Soy Protein Burger cooked out on the grill. (Like a Boca, or something). Damn!!

I know... I once was so hungry for bread, I made it from wheat berries in our freezer! So, that and water. Okay, and some salt. Three ingredients = bread. (It wasn't the best, but was edible.) But, yeah, "Invented" is a super addition to the list. Green catsup ?? I can't imagine how many chemicals you have to add to make it green like that! Twinkies... good lord.

Ewwwwww! :-) Yeah, I think people "drank" raw eggs straight for a while after the movie Rocky came out -- made the practice seem "tough." I know there's also a tradition of adding them to smoothies and malts. I've always been kind of disgusted by eggs, so luckily for me there won't ever be an opportunity to try that. :-)