The "Intentions" of Our Food 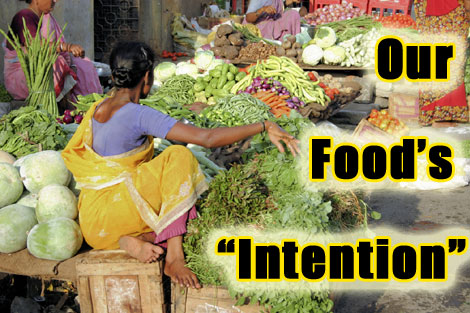 Jim here... During one of our marathon sessions at a Border's book store, I recall reading somewhere about the notion of a fruit's "intention" to be eaten. It's been a few years since I've read that, but I immediately resonated with the notion that many fruits, nuts, vegetables, and seeds are actually evolved to be eaten by other living beings and, therefore, to consume them (or their fruits and seeds) is to participate in a wonderfully nonviolent act that is in perfect harmony with a kind of primordial Earthen symbiosis. Whether these plants, vines, trees, etc. feel a conscious intention to have their fruit eaten by others is a matter of metaphysical conjecture. But, within the context of discussing vegetarianism, the argument is certainly relevant and fairly strong. 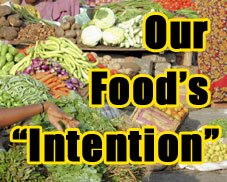 If you walk up to a farm animal, it may be impossible to estimate what's going through its mind, but I feel intuitively that it isn't, "Please kill me and eat my flesh." In other words, there's no "intention" present in that scenario. On the other hand, it's very easy to imagine that a tree produces fruit, knowingly or not, in order to produce offspring. Throughout the entire evolution of that tree, part of that reproductive process has involved animals (including humans) eating the fruit and then "redistributing" (which is a nice way of putting it, I suppose) the seeds naturally.

Now, I realize that, if you extend this philosophy out to its extreme conclusion, you would likely end up with something like Jainism, which is really an admirable ethos advocating absolute non-violence. That goes for all living things, which naturally extends to food. It is said that Jains eat nothing that requires killing the entire plant. For example, onions and garlic would represent karmic no-nos (although, I assume, the greens or scapes would be acceptable).Perhaps that's something to aspire toward, or at least to discuss here. But, at the moment, we do probably eat many things that kill the plant.

I wonder, by the way, if many Jains know about raw foods, or if there are recipes and/or raw food trends alive in those communities. I suspect they would be very open to it, as cooking kills living enzymes within the foods. I know that, with the Hindi word "Jeevan" in our title, we have attracted many Indian visitors. So, if anyone out there knows the answer to this, we'd like to hear about it and share the philosophy!

Well, I think I'll leave it at that for today.Funny, I'd meant to discuss something else (although certainly related). But, in the interest of keeping our posts relatively brief and readable, I'll save that thought for tomorrow. As I said, it's related, anyway. In the meantime, I'm curious to hear what others think about this notion of intention. And, by the way, I don't mean to imply or assert that the dietary practices of Jainism are the healthiest or "best" in any kind of hierarchical way. But, it's interesting to at least discuss how morality and diet dovetail, a topic more relevant than ever in this time of factory farming and exponential population expansion. I'm also interested in the notion of harmony, which I barely, just obliquely, touched on above. Perhaps these are both topics we'll continue with sometime.