Here in Portland, we had to search around town quite a bit to find a decent, affordable source. As produce goes, young coconuts are not the most common item and, as such, can really confound people when it comes to (1) finding them, (2) finding *good* ones, and (3) not paying an arm and a leg for them.

As of this writing, prices vary widely in our market. At the gourmet stores (think Whole Foods or New Seasons), they run upwards of $5 each(!), which is probably twice what you can get them for elsewhere. After searching around, we found a source for $2.48 each -- affordable, but still more than we once paid in Pittsburgh. (Our co-op there offered them for about $1.50 each a few years back, as long as you bought a case of nine.)

Hopefully, you'll find a source that offers a decent selection from which to choose, and at affordable prices. Really, the purpose of this article is two-fold: (1) to encourage you to eat more healthy young coconuts, and (2) to help you save money while doing so. If you have to spend $4 for a coconut, then you really should be doing all you can to get the best coconut possible and avoid having to throw it out. After all, if you toss out a $4 coconut because it's bad, then that means your next coconut is really an $8 coconut -- and that's plain crazy!

Before beginning, let me just say that I realize some young coconuts (e.g., ones I've seen in the D.C. area) are available still in their hard, greenish or yellowish shells. ?In my experience, this is unusual in the U.S. ?If you can find them this way, then I'd say you're likely getting some fresher coconuts than the Thai ones -- possibly domestically grown. (In Florida, it was easy to find them still with their shells. Many people there will gladly give you coconuts right from their trees, in fact! And, oooooh, friends, fresh-from-the-tree coconuts are divine!) ?Here's yours truly doing a little coconut juggling with some full, whole-green-shell, beauties: 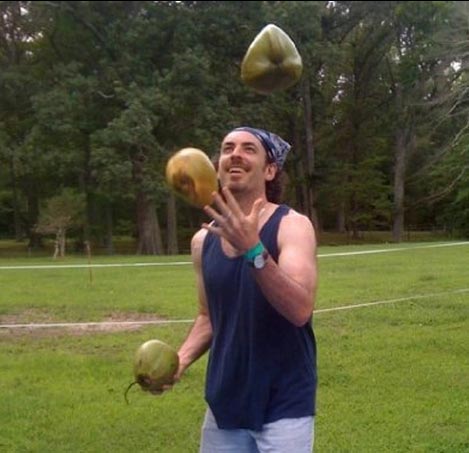 Outside of the southern U.S., though, you'll commonly find young coconuts pre-husked and looking more like this (except that they'll be wrapped in plastic): 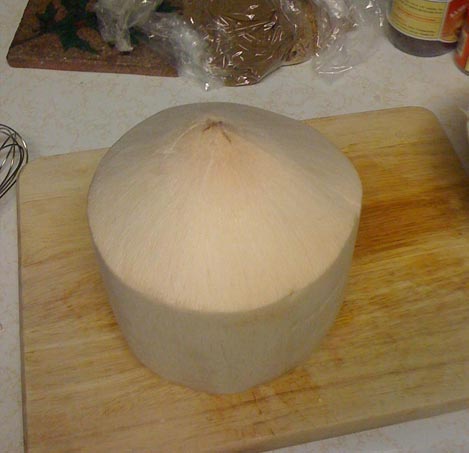 Here's my process for selecting them:

Once you've purchased your coconuts, they'll generally stay good for a week or two in your refrigerator. Ideally, a coconut will have bright white inner flesh, and relatively clear to slightly milky water. My own rule is to consume them as long as they're not pinkish (or any darker) inside. Occasionally, you'll find ones that are mostly water and hardly any flesh. These generally appear somewhat darker inside since they do not have much white flesh there, but may still be okay to consume. If you get one of those, just taste the water to see if it tastes acceptable. But, again, if you see pink flesh, you should just write that one off.

Whenever I find a pink one that slips by (perhaps I too should sit on the grocery store floor!) I use the liquid as a hair treatment. It may be fermented, but there are still a lot of nutrients waiting in there to give me shinier hair!

Thank you! I just bought my first two last weekend and didn't have a clue what I was looking for. Found them at my local Asian Mkt and per your description they were perfect! My very first time using one was for a Coconut Curry Soup! That recipe is a keeper for sure. I love your site and look forward to more tips and recipes.

I'm in Thailand at the moment, so this is good advice. There are lots of coconuts on sale here and I have no real idea how to pick them, although I have noticed that once they start turning a yellow or brown color then they're not too good. The very light ones seem to be the best. They also just look fresher. I'll start taking more notice in future.

What a great idea, Kelly! Maybe collectively we can all come up with ideas of how to use the "bad" coconuts so we aren't losing so much money! Thanks for the tip!

Great, Lin! I'm so glad you tried and loved it! We can't imagine not having coconuts in our diet...we love them so very much!

For those of you in the Portland, OR area: Fu Bonn on SE 82nd, that big ole Asian market, almost always has young green coconuts for about $1.50! I got mine today for $1.49 and I've seen them on sale for $1.39 sometimes ("Regular price: $1.60" says the bin label). And you can buy just one! Usually right in front of the store past the entry turnstile thingy.

I can think of another tip when selecting a young coconut. Unlike their mature brown counterparts, you should not be able to hear any liquid when you shake a young coconut because it should be too full of water for the water to slosh around. If you shake it and hear the liquid, it's guaranteed to be a bad one.