[Editor's note: The following "My Raw Story" piece isn't necessarily a raw food success story per se. The children in this story have controlled their diabetes using an acid-alkaline balancing diet protocol designed by Dr. Rober O. Young. Since a many raw foods are naturally ph balanced and ideal for the human body, and because these children were healed using a natural diet adjustment, we include it here to further underscore the importance of diet with respect to human health.]

I am a registered nurse, and I study alternative health measures and nutrition. My husband and I have six precious children.

The story behind our impressive news began in January of 2008. I thought our youngest child, Gabriel, possibly had a bladder infection. What started out to be a somewhat routine doctor visit ended up with disturbing news. Our family doctor said he suspected Gabriel had Type 1 diabetes. Shock hit me as I tried to absorb the news. We had no family history of diabetes, and overall our family had been very healthy. The extensive tests taken the next day revealed that our six-year-old son would probably be insulin-dependent within six months.

Our pediatric endocrinologist insisted that there was nothing we could do to prevent the onset of Diabetes. He said that no dietary changes were needed or would help.

After scouring all known resources and a lot of prayers, I discovered Dr. Young's research. Dr. Young graciously invited us to a microscopy class to observe, learn and have a look at both the live and dried blood of Gabriel.

We thought Gabriel had been on a reasonably healthy diet, but as we would come to realize, it was far too acidic with way too many carbohydrates.

We chose to dive head-first into the pH Miracle program. Immediately his blood sugar levels came to within normal ranges. His weak body soon returned to its previous vigor.

Our story took a twist in the road when only four months later our ten year old son, Nathan, was also diagnosed with Type 1 Diabetes. At the same time, a blood test revealed that Gabriel had no measurable insulin left in his blood. Although we were thankful that Gabriel was maintaining normal blood sugar levels, we grieved at what appeared to be the loss of insulin production. Meanwhile, people were amazed when I told them our story. This seemed impossible according to anyone in the medical field.

In July, after two months of perseverance, we ended up back at our doctor's office. We were amazed when he announced the results of both boys' recent lab results. Gabriel's pancreas had once again begun to produce some insulin. Nathan went from insufficient insulin levels to overproducing insulin in order to compensate for insulin antibodies present. Both were maintaining normal blood sugar levels. We were overwhelmed with gratitude.

Back to the daily routine with renewed vigor, hope kept us lock-step in the COWS plan... Chlorophyll, healthy Oils, high-alkaline Water, and minerals Salts. 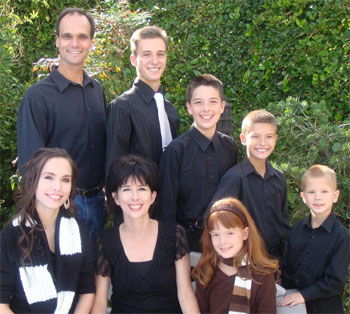 We celebrated Gabriel's six month anniversary since being diagnosed. The pediatric endocrinologist had predicted Gabriel would be insulin-dependent within six months. What a wonderful feeling it was for him to have a normal blood sugar that day and to watch Gabriel playing and swimming so joyfully. Had it not been for what we had so recently learned, that day could have been another sad day spent in the hospital dealing with the grueling struggle of insulin dependence.

September, two months later, brought more amazing news. Our doctor sat us down with their new lab results. He said Nathan no longer appeared to exhibit lab results and symptoms of a Type 1 Diabetic. In their diagnostic and labeling system, he would now be categorized as a Type 2 Diabetic. Gabriel, incredibly, would no longer be considered a diabetic. His fasting and postprandial insulin levels were considered normal!

Now, it is January of 2009, and our journey continues. It has been one year since we found out Gabriel had Diabetes. We are introducing more carbohydrates into Gabriel's diet. He is tolerating them well. Nathan is doing well and hoping to follow in his brother's footsteps.

Helping our children with their new dietary opportunity has brought many touching and comical stories. We could write a book. Often the boys hug me and thank me for being on the pH diet and their renewed health. We have adopted an "attitude of gratitude" as our motto.

One key to encouraging them seems to be having a good alkalinizing substitute for different occasions. Gabriel wanted radishes in his plastic Easter eggs. For Christmas, Nathan helped concoct great gingerbread and cutout "sugar" cookies. We experimented and came up with a great alkaline brownie!

Tears well up in my eyes as I remember an incident which happened this past weekend. Gabriel was invited to a slumber party. To prepare for this big event, I called the mom hosting the party to get the menu. We carefully prepared pH snacks and meals that corresponded with the festivities. When I came to pick Gabriel up, he came running towards me with his sweet brown eyes twinkling and a toothy grin.

"Mom!" he exclaimed. "Guess what I got from the pi ata? All toys!" The hosting parents had so thoughtfully considered Gabriel's diet. I asked him to tell me about his favorite part of the party. Without hesitation he shouted with zeal "The FOOD!" He then, with a big bear hug, whispered "My food tasted so much better than their food. Thank you, Mom."

When people ask me how we could live with a special diet, I answer gently "How could I not with what we now know "

Sometimes wonderful news does arrive in unique packages. We thank God for ours.

You can find out more about Sally Roman and her children by contacting her:

"Our pediatric endocrinologist insisted that there was nothing we could do to prevent the onset of Diabetes. He said that no dietary changes were needed or would help."

No matter how often I read a phrase such as this, it's always shocking! I'm so glad that people like you don't just accept it as the final answer!
-Rawbin

What an incredible story and I believe it! Most doctors are not trained (they have one class if they're lucky) on nutrition, much less how nutrition can turn around conditions as described here. Did you notice on Dr. Young's website that they even have to have a legal defense fund? That's what irritates me that folks such as Dr. Young even have to defend themselves!!! The part I sooo love about this story is the fact that "the mom" is a registered nurse AND is studying natural health and nutrition! We all need more people like her in our world!
Our first acupuncture doctor had been an oncology RN prior to her study of acupuncture. Crossing over to Chinese medicine - I credit her in getting me off of 5 asthma/allergy medications. I love cross-trained folks who have the COURAGE to study more, and live their heart gift to the world.
hugs and love,
sheila