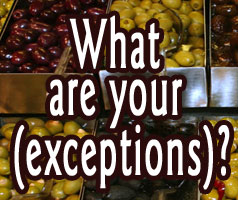 And then there are the "grey" food areas, much of which becomes subjective as to whether they're raw or not. I'm speaking of things like spices, teas, fermented foods, cured foods, dried foods, ?frozen foods, blended foods, food-processed foods, etc. Some people consider these things raw and/or, more importantly, not harmful to the human body. ?And, in cases in which foods are not considered harmful, they're generally considered to be health-neutral (like, say, herbal teas) or beneficial (as with fermented foods). Indeed, many people consider quite a variety of cooked foods to fall within these categories (neutral and/or possibly beneficial). Quinoa is a good example of a cooked food eaten by a number of (primarily) raw foodists.

In any case, if I do come across one interesting thing about raw foodists, it's that a lot of us have some "exceptions" to our dietary practices, or at least rationalizations about whatever we eat that is not raw or is questionable as to its "rawness." For some, it's just a general "allowance" of sorts. For example, they strive to eat a relatively high-raw diet, but will occasionally eat a cooked meal or even a small indulgence. This may be to "fit in" easier in a social situation, or just because they happen to love a certain style of cooking -- something without which life just wouldn't be the same.

I've been "high-raw" for going on four years, and darned near 100% for going on two years now. But I certainly have my own exceptions. So, I thought I'd list them here, if only for my own interests:

Hmmm, am I forgetting anything? ?I don't think so. Everything else is just raw vegetables, fruits, nuts, and seeds at the moment. I'm definitely drawn to beans lately, although I haven't had any in years. If I were to expand my list, it would be in that area -- beans, legumes, dal. ?So, what are your exceptions? I'm curious to know what our fellow raw foodists (well, those that consider themselves primarily raw, anyway) eat that isn't raw. And, if you care to ponder it, let us know why. There's no right or wrong here, btw. I'm not stating all of this stuff, or posting this kind of conversation, as a way to engage anyone in an argument or to ask anyone to be defensive, justify their diet, or post their rationale for eating whatever they like. It's more of just a general, light-hearted discussion, based solely on our interest in talking about food and nutrition.

Hi Jim! Which fermented veggies do you eat? The ones by Bubbies (pickled and sauerkraut) are raw and unpasteurized. My husband loves their sauerkraut!

My exceptions are, like you, olive bars, and frozen fruits in the winter for a better variety of smoothies. I have a hard time finding a good salad dressing recipe so I'll get the ones at the health Food store as long as it's dairy free. Less is best on the bottles ingrediants list. Having a good dressing helps us eat lots of salads.

Jim, I agree with your list and add maple syrup to mine. I do use that occasionally. And I love those olive bars and the artichoke hearts.

I do all of yours except tea. Never a warm tea drinker, I blend mint with lime or spring water to make a concentrate for cold tea.

I do tobasco sauce and other hot sauces, and A1 sauce. I do store bought almond milk. Toasted sesame oil. Honey and vinegar of unknown processing in EMERGENCY. I am already planning on adding a fully cooked line of beans in the winter as well. Not often, and not much. Perrier sparkling water.

I think that's it.

I love teas, especially when the weather is colder in Illinois. I am not apposed to spices either. I will eat some very slightly steamed vegetables due to compromised digestion due to gluten damage over the years.

I would consider most home-fermented foods to still be raw. I am not sure why you even mark them as an exception.

Point taken... In general, I think most raw foodists do eat fermented foods. But, there is at least an argument that fermented foods aren't part of a human's "natural" diet -- meaning the state things are in when we harvest them. I've heard some anecdotal stories of naturally fermented foods, but putting a bunch of cabbage and veggies into a jar and waiting for a few days (or even a few years) isn't eating food in its natural state, the way nature provided it for us. Again, I'm not advocating against it, I'm just stating the argument. I'll check my copy of 80-10-10, for example, as it could have been there where I read this. But, I don't want to speak for Dr. Graham here, unless I can find a quote from him. In any case, this is why I marked them as an exception. :-)

I used to adore A1 sauce... I should try to make a raw version of that sometime! Some moderate bean intake sounds tempting to me, too. Oh, and I rather regularly buy Perrier and other sparkling waters. Guess I forgot those...

Yeah, a lot of otherwise raw folks use maple syrup as their preferred sweetener. While it's not raw, it's certainly far better than, say, refined white sugar. 100% pure Grade B is the best for nutrient purposes -- and, IMHO, flavor.

Only things in the refrigerated section -- sauerkraut, various kimchis, and occasionally other things. Bubbies products are frequently in my grocery cart! :-) You know, sauerkraut is amazingly low in calories. I'm always amazed to read that Bubbies label. I think the entire jar has like 42 calories. We reuse the Bubbies jars as smoothie glasses.

The A1 sauce helps me with "meat." If I do mushrooms in A1, especially a big portobello, It tastes and feels like a hamburger or steak. Nasty words to this vegan crowd, I know. I tried making A1 substitutes and still haven't gotten it right, so if you come up with one, I would appreciate it.

Honestly though, I haven't had A1 sauce in a long time. I think I'm starting to get over that meat craving.

I think about your blog post often, the one where you said that going out to pick up Pizza for the company guys is like going to the office supply store, you don't think of it as food. - I can hardly get to that point. I'm still having salivary longing activity going on around cooked foods.