Do I Need to Eat a Certain Percentage of Raw Foods to Call Myself a Raw Foodist? 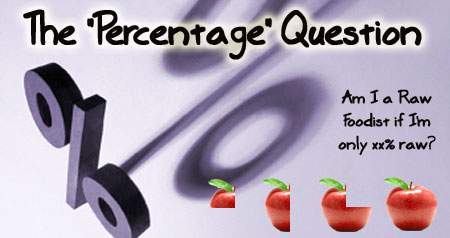 Jim here... "Do I Need to Eat a Certain Percentage of Raw Foods to Call Myself a Raw Foodist " This seems to be a common question among some people interested in pursuing a raw and living foods lifestyle. I fielded such a question recently online, and thought I'd recap my own answer here, somewhat edited for enhanced clarity:

I know what raw foodism means. And, if you're here, you probably do to, or at least you're interested in it and know the basics. But, to the mainstream population, raw is absolutely unheard of, totally out of the box -- relatively speaking. So, let's begin by taking a look at who in the world has potentially heard of RAW. Let's start more broadly and then hone in.

It's surely safe to say that a healthy percentage of the world's population understands what vegetarianism is, and that a lesser but still substantial portion of the world has heard of veganism and knows essentially what that is. But, the percentage of the world's people who have even heard of eating ONLY live foods ... wow, that's got to be one tiny number! Definitely less than 1%, I'd guess. Maybe .1%. (Around a year ago, I attempted to make a determination of the number of raw foodies worldwide. That article is here.)

So, I'm trying to first demonstrate that RAW should probably be regarded as a?totally separate concept as compared with vegatarianism or veganism. Why demonstrate this ? Because, for one, I've never heard anyone debate whether eating a certain percentage of vegetarian or vegan food deems one a vegetarian or vegan.(Vegetarians eat absolutely no meat; vegans eat absolutely no animal products. So, both are "100%" by definition.)

RAW, though, is separate. It doesn't seem to fit that model as naturally. And it's not a diet, anyway. It's more of a lifestyle or a matter of awareness of such a lifestyle. Personally, I like to compare it with an art form!

To that end, maybe an example from another paradigm would explain the phenomenon I'm describing here, and answer the question in an enlightening way. For example, music. Now, I own a piano. At night, I often play the piano and even compose my own original works frequently. But, I don't do it professionally. So, am I still a musician I'd say yes.But, would a full-time, virtuosic musician -- someone like one of my heroes, the great Yo-Yo Ma -- assert that I'm not? I don't think so. I think he'd be thrilled I'm giving it a try, and would not label me at all. So, maybe raw is like music. Maybe if you're tuned in at all, you're "raw." Some people are raw dilettantes, others raw virtuosos!

Maybe my point is that naming some arbitrary threshhold percentage is, for many purposes, irrelevant. The goal being optimal health, not attaining a magic number, I believe the question is of no practical importance. I do believe, however, that, for many people, the path to optimal health is in fact somewhere upwards of 100% raw and living foods. For others, it may be lower. (For me, personally, it's higher -- a fact that took me years to understand and come to terms with.) In my experience, individual optimal health all simply boils down to genetics. What do you think

Well put Jim! I did laugh at the intended/unintended pun of raw out of the box! I'm starting to believe that as each of us increases the amount of raw in our lives, it is our own "coming out of the box"!

I believe each person's body is different and has different needs. Each person is on their own unique path to greater health, some have sensitivity to nuts..others to food combining. Some gain greater health through yoga, meditation, prayer, having a green lifestyle, connecting to the earth, ..etc.beyond just food. I don't worry about labels, I just keep reaching higher and have fun in the journey. Thanks Jim!
Many Blessings, Helen

That's funny, Faye. The pun was unintentional, but I enjoy reading it that way, too. Raw IS out of the box in that it's the opposite of the boxed/packaged foods lifestyle lived by so many. Wendi and I shop pretty much 95% in the produce and raw bulk aisles (the other 5% being prepared raw foods, a bit of pasta & so forth for our daughter, and some frozen fruits). But, in amy major grocery store, the produce aisle accounts for, what, 15% of the *whole* store? It's sad how few fruits & veggies most people eat, favoring of all the processed junk out there. But, we're going to attempt to draw some healthy, positive attention back to that produce section. That's much of what our upcoming RV tour is all about! Peace to you! -Jim

I agree 100% with Helen Rose. We must remain unique and cater to our own needs to achieve optimal health.

I believe labels and percentages distract us from what really matters when it comes to health and awareness. We need to reach our inner-most meaning, and this is where we truly grow.

On multiple health blogs, I really enjoy seeing the vast amount of individualism and uniqueness in each member -- but with one common trait -- all these people want better health. That alone should be respected.

Food is a lifestyle. Much like music. Much like anything else that molds and shapes your being. This is why spirituality is considered so welcoming -- unlike many organized religions, it has room for movement and a place for each and every different soul. You embrace the divine in your own way, as this is what it is all about....

... making the truth your own.

OMG Rawbin you are cracking me up tonight!! I'm laughing so hard.

For anyone reading this, don't be worried about raw carob. Rawbin is
joking because I announced that this evening I added some roasted carob to
my smoothie because I was out of raw carob. I joked that the raw police
would come to lock me up. I enjoyed my smoothie without any guilt, knowing
that the roasted carob was so minimal that it wasn't going to ruin my raw
food diet.

Thanks for the laughter, Rawbin!

I like the analogy to vegetarians and vegans because they have a reason for what they are choosing to eat as do living foodists (I hope). Does that mean a vegan will NEVER eat anything with honey or a vegetarian fish? Maybe in the ideal world, but not in the one that I live in.

As a living foodist, for those that understand what we are doing and why we are doing it, our ideal choice of foods would be those that are (obviously) living (hence the title live foodist). Do we not succomb to maple syrup or frozen veggies sometimes? Maybe, again, in the ideal world, but not in the one...you know the drill.

As you say, our goal as a living foodist goes beyond the moral implications of vegetarianism and veganism: we are striving for the best health possible in the world in which we live. Hence your terminology that this is a lifestyle.

Why aren't we all 100% living foodests then? In my experience, it has been a journey, and as a journey, there have been many potholes. We all have our reasons we do not live perfectly wherever we strive for it. (None of them are particularly good reasons necessarily, but they're our reasons, and we're sticking to them!) If we see it more of a journey though, we will appreciate it more when we look back at where we came from and see how much distance we have covered. Yet we look ahead, and we see we have some distance to travel yet. Isn't that exciting though? Hasn't it been a grand ride? I can't wait to see where I end up!

I think vegan or vegetarian can also be classified in terms of 'percentage' - it is just that nobody does. But I have heard many people talk about being 'mostly' vegetarian or vegan.

Why does the raw food movement use the percentage approach? I don't know. Perhaps because many people are not '100%' but want to tell others (or themselves) that they are working towards an ideal? What disturbs me about the whole percentage approach is that I feel it implies those who are 100% are 'perfect', which does not allow room for people to eat cooked food at times for social, nutritional or emotional reasons.