Update on Our Move 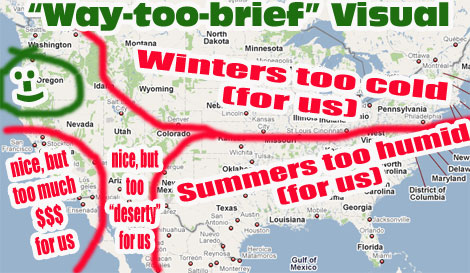 Well, I hope we're finally approaching the true end-game of our whole move. We now have our home listed with a new realtor (no longer going it alone as a "for sale by owner" scenario), so we're hoping that a renewed effort (and a lower price) will attract a buyer. The market seems to be perking back up a little as well, which certainly can't hurt anything.

Thanks to everyone who sent in suggestions for places we should consider moving to. I assure you that we researched each and every one to an almost ridiculous degree. There are more amazing places to live than we ever knew, and we were delighted to learn about some areas with which we weren't very familiar -- funky little enclaves in Texas, Tennessee, New Mexico, etc. I think we've hinted as to our inclinations before, but I can tell you that, after so many months of intense deliberation, we believe the best domestic home for Pure Jeevan is probably in Oregon.

I say "domestic" because, although Wendi and I would love to explore, say, the Mediterranean as a home base, KDcaT made it loud and clear that she wants to live in the States. And, I say "probably" in reference to Oregon because, well, you can never be 100% sure... All you can do is try your best. Frankly, we were all highly drawn to the cultural environment and "vibe" of Northern California. But, in the end, three factors seemed to be keeping us away:? (1) the prices, (2) the occasional presence of smoke from the legendary California wildfires, and (3) some more complicated, longer-term concerns we had about droughts and water issues (as growing our own food on a large scale is still an important consideration for us).

In that seriously over-simplistic graphic atop this piece, I made sure to always include the words "for us" when describing our personal reasons for eliminating various regions from our considerations. In fact, the true reasons were usually much more complex than what is shown but, for brevity's sake, I just stated a main reason.

So, the next step is to visit and tour Oregon (probably in early 2010). Since I'm still working at a corporate job, this will be something that Wendi and KDcaT will be doing. It's probably not the best season to do this, of course, but it's also a decent opportunity to see just how cold an Oregon winter really is. Who knows... maybe they'll return home and say, "Oh no, it's just too cold there!"?

Anyway, our current focus on Oregon has brought our attention to Portland, Salem, Corvallis, Eugene, Bend, and even to a few southern locations. Portland seems potentially pricey -- and, frankly, according to some environmental reporting sites, is perhaps not too great of a leap from Pittsburgh in terms of regional air pollution statistics. We'll have to see. Anyway, that's where we stand at the moment.

So, who currently lives in (or formerly lived, or has visited) any of these locations within Oregon? We'd love to hear your thoughts on pros/cons, etc. of these Oregonian cities!

If you ever move to the Mediterranean, let us know! I think it'll be easy to convince my hubby to move there :D

I live in Vancouver, WA. This is just across the river from Portland, OR (or a 10-15 minute drive). It is BEAUTIFUL here. I used to live in Johnstown, PA (just a couple of hours from Pittsburgh). The summers out here are perfect. Sunshine, blue skies, warm by day, and cool by night for sleeping. We live 90 minutes away from Mt. Hood (snow and skiing) and 90 minutes away from the ocean. The winters are usually mild, with an average temp of 40 degrees. Sometimes we will get colder weather, but it usually only lasts a week. It does rain during the winter quite a bit, but it has never bothered me. It is more like a mist than a RAIN. I know that I love it here!!!!

I've only been to Oregon once, but thought it to be very livable. I will be so eager to find our what you all decide.....this is just so exciting to me! I am the type of personality that would love to just up and move!
Blissings & Love!
P

when in eugene, let me know and i'll bake a cake... umm... i mean make a cake. :) or cookies or kale chips... :) it's beautiful and wonderful out here. i've lived many places and when i hit eugene, i knew i was 'home'. sigh! also... we have more health food stores in eugene than most big cities i've lived in. there's a warmer 'banana belt' in the sw corner of oregon, near the ocean.

I visited Eugene way back in the late 90's and it was awesome. There were street fairs (where I had my only hemp burger) often. The produce is spectacular. Eugene just had a really neat energy to it. Nice, openminded people and fantastic forest scenery.

Mainly, I'd be concerned about the money end of things there. Withe the Euro being so much stronger than the dollar, I can't see us being able to afford much there. Maybe someday, though! :-)

I wouldn't say it's 100% out of our consideration. I think Wendi and KDcaT will probably visit there during their trip to Oregon in early 2010.

It's worth looking into as it's so close to Portland. I suspect we'll wind up in a city one notch smaller than Portland or it's burbs, though -- in order to get a little more for our money. But, you never know...

Well, you've already turned Tulsa into a raw Mecca! So, anyplace you go would quickly follow suit, I'm sure. :-)

Really? What's a good city to look into in that "banana belt"?

we live outside of salem near a little town called aumsville. we have 2.5 acres and are able to grow all sorts of wonderful things here. the growing season is may-september, but with covered beds, greenhouses, etc... you can grow all year 'round. summers are divine - not hot or humid (a few weeks in the 90's here & there, but we don't have air conditioning & we do just fine). we had out tent up all summer and loved sleeping outside under the stars in the fresh air. the blue skies are clear & beautiful - we can see the cascades while we're out tending the garden, too! we homeschool and simply love it here! when you come to oregon for a visit, please come stay with us - we have plenty of room and we can help answer your questions. : )

I read a random blog once from a man and his wife that live in Bend, OR. I don't know much about climate, but from what I saw in his photographs it was a beautiful place. Where they were, in the mountainous areas, there was lots of snow, but it was so peacefully quiet and blissfully serene from what I could see. They also posted plenty of pictures of cultural events as well. Gypsy camps that were puplicly known, homemade instrumental groups, and to my eye, very down to Earth and 'connected' which when I read Bend up there, I thought WOW, that sounds so The Dees.

Not sure if this helps any, but it just stuck out to me. Good luck in the tour!

btw...it wasn't snowy all the time. Just when there was, it was a lot but the warmer months were so green and clean looking.

Wow, sounds SUPER! I'll make sure Wendi sees this, as they're likely traveling there in early 2010. Will be in touch! :-)

You're not allowed to complain about the weather. Just be happy you aren't in Canada where I am. It is -45C/-49F all of today and into tomorrow. So buck up! lol

Oregon is a beautiful state, I lived in Roseburg/Coos Bay/Tilamook/Portland for about 20 years. I am an out door person, camping and hiking. Origionally from California where I was used to doing these things whenever really. Once summer started you could count on being able to enjoy this without a problem. Oregon on the other hand, is green for a reason. :) I just don't do rainy stuff all year. I must have too much of California in me. I love the sun and heat. I would rather have to water my garden.

I live in Bend, Oregon and it is an amazing place to live. People are really nice it's a safe place to raise your kids..The only downside is the job scene here sucks right now. We're talking hundreds of people lining up for a job at Olive Garden. If you are considering here, you could consider creating your own business. Oregon in general has a great vibe, good people, for the most part pretty earth conscious, lots of open spaces, beautiful wilderness areas, Bend sees the most sunny days in even in winter. Good Luck, Jen

Brr! I can only imagine how cold it is there, now! I need warm sunshine!!

Thanks for sharing, inkartinc! We're headed to check out both CA and OR in another month, or so. I'd love more sunshine, but have to admit I'm not crazy about too much heat. It will be interesting to see where we settle! So exciting!

Thanks for the comment, Jen! Bend is on our list to visit...looking forward to finally picking out the place where we'll settle! Maybe we'll see you when we're in Bend. We'll be posting info about our trip in the coming month, so keep an eye out for it!