The Most Obvious Raw Food Tip EVER!

For many people, a change in diet is largely a mental issue. You *decide* that you're going to do something different, and then commit to it. You may shop a little differently than before, but quite often that is the extent of any action taken (other than preparing and eating the new foods rather than the old ones).For many, the commitment aspect is the trickiest part. ?Books could be written on this subject alone (and we're sure we've discussed this at length here on the blog).

Today we want to share a super-easy tip to help with the commitment side of this: Keep your fruits and vegetables VISIBLE. 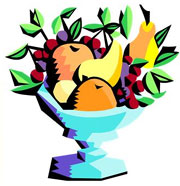 Now, what does that mean? Well, we hope you'll bring some creativity to this. It might mean putting a fruit bowl out on your table as a centerpiece. Or, it could mean coming up with a better way to organize your refrigerator. (Just think of how much produce goes to waste simply because it's tucked away in some drawer or in the back of some lower shelf!) At the same time, take any less healthy foods that you have and relegate them to a less important visual position in your kitchen.

Keeping your healthy foods visible will not only remind you to eat well, but will actually proactively help you tap into your intuitive nature. When you see something that you love that is healthy for you, you will desire it -- and that's a good habit to get yourself into. :-)

I love this tip but I simply have to sometimes tuck the celery away or it goes limp. Any tips for limp-less celery are appreciated!

Actually, having it out on the table isn't always the best idea. However, having cleaned and sliced celery upright in a glass of water, covered with a recycled plastic baggie, in the fridge keeps it visible if you place it in a good place in the fridge (the door is great if the space allows the tall stalks). Having it cleaned and cut make it a fast snack, too! :-)

I love this- so simple and so true! I have kids and cats so the best way for me to do this for healthy snacks every day is a pretty glass tray with a lid. It has room for ice underneath, so I cut up fruit and veggies and put them in the tray with yummy dips and my kids go right to it and it all those healthy fruits and veggies whenever they are hungry. :) This also works well for me and I am always happy to finish whatever they haven;t eaten before dinner so nothing goes to waste.

I've been doing what you suggested for years. But I only realised how important it was when my girlfriend moved in with me. She eats more junk than I do (although she is slowly changing) and tends to have it stored in prominent places. I started moving it to the back of teh cupboards and having the healthy stuff at the front. She would then see the healthy stuff and decide to eat it. That helped her change.

This is also what many supermarkets in the UK do. The fruit and veg is at the entrance of the store because it looks good and healthy and attracts people in. Of course, they then get to the junk food in the rest of the store as well.

Thanks, Staci! I love the idea of a glass tray with room for ice and a cover to keep things fresh and still visible! That's fantastic!

Putting healthy things in the front of the cupboards is a great idea, too! Personally, I like totally emptying them of everything less than wonderful, but for those who can't then hiding some stuff in the back would be GREAT! Thanks for sharing that!

That is a great tip.

I remember my mom did that with carrots when we were young.