It'll take a few days for Wendi and KDcat to reach Oregon. Once there, they plan to rent a car and begin their trek. They'll be beaming lots of content my way while they're gone -- pictures, videos, and no-doubt stories of their raw adventures over 40 days and nights! So, I'll be keeping the home fire burning here once again.The fun starts later this week!

If you recall, the last time I managed the blog solo (a few months back), it was because Wendi was away from the computer for an extended period of time while healing from Lyme. Thankfully, she's much improved since then and leaving under much more favorable circumstances. I'm very excited to hear about all of the places they'll visit, people they'll meet, and raw foods information they'll share along the way with all of us.

Let's take a quick, closer, peek at some of those snacks! Many of the products shown below are snacks that we consume -- some regularly, some as rare treats, and a few items we've never tried. Some highlights include:

All of these can be found at Natural Zing -- http://tinyurl.com.NaturalZing. We really appreciate Natural Zing's continued support and hope that, if any of you are looking for raw food snacks or other supplies, you'll consider shopping at Natural Zing! 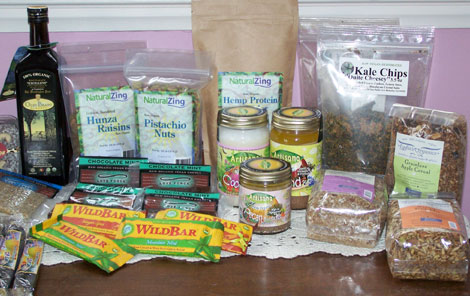 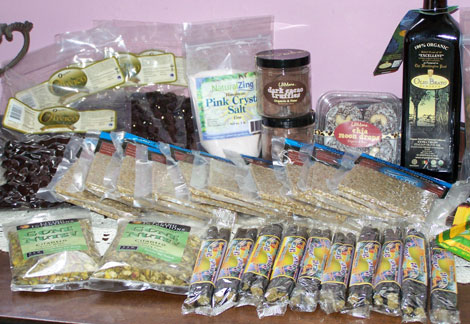 that saves you from doing so much prep! usually I try to make tons of that stuff before i embark on a trip.

i was a little worried about wendi and how she felt before going on this big adventure. thanks for reassuring me she's ok.

hunza raisins are very good! nice and sweet. i'm hooked on them!

Aww...you're so sweet, Aimee! I still don't have full range of motion in my shoulders and my tone/strength isn't completely back in my upper arms, but I'm okay for driving, now.

I figure there's no better physical therapy than being away from home and having to move/do things out of necessity. I'll be fine...knowing that all things work out for the best. :-)

I hope you've been feeling well, too!

you're so brave and strong! just be sure to take plenty of breaks and take care of yourself.

i have been feeling pretty good but i get flare ups so i have been very cautious. i'm just enjoying the good days!

love to you, aimee

Oh man, I hope they don't munch it all before I get a taste of some of those goodies! Natural Zing is SO awesome, Jeff is really a great guy!
Can't wait to hug Wendi and KD Cat in person and take them on a whirlwind tour of Raw LA et al!
love love love
deb

Wendi! We will take good care of you.. you can rest all you need to, no worries here at Hotel Young!
our casa es su casa..
love you deb

Wow! you are set! So great all the support you're receiving. Time to hit the road - be safe in your travels and have fun! Even though we will miss you this go-round we'll see you soon!

psssst hey Jim.. don't tell Wendi and KDCat.. but tell me, what is Wendi's favorite raw meal/treat? I want to make a little something special!!!!
deb xo

I wish South Africa had something similiar. Honestly, I'm feeling a bit discouraged at the lack of information and support in South Africa. I've done a very intense search for RAW vegan treats that I could buy. I work, study and still do extra-curicular activities, so my time is limited.

There is absolutely NOTHING. I guess I'm going to have to sit down once a week, and work magic to prepare for snacks for the week ahead. I bought a dehydrator but I'm still waiting for it to be delivered :) It looks so yummy! lucky ducks (or cats !) :D