Oregano Oil... Is the Taste THAT Bad?

As promised, here's today's herbal installment, a video on Oregano Oil! Verdict: It's strong, for sure, but it's not as bad as I thought it was going to be!

There are a number of things I should have mentioned in that video. To begin, I want to stress that not all essential oils can be ingested safely. Some are only meant for topical application, and some are only really recommended for aromatherapy purposes. While oregano is safe to ingest, you should definitely dilute the oil if you're going to try taking it orally as I did. And, definitely start out with a single drop, as I showed. When in doubt, consult an expert or a book -- and of course make sure you have the correct oil!

For those herbal essential oils that are intended primarily for topical applications (i.e., massaging into the skin), you should still be very careful. Many oils can irritate or burn the skin (especially for individuals with sensitive skin). Generally, it's advisable to either dilute the essential oil in a carrier oil prior to application, or at least keep a carrier oil nearby while applying to the skin so that you can ease the pain if any irritation develops. But, again, be sure to consult books and experts prior to putting anything in or on your body.

I also wanted to mention that we advocate the use of organic herbs and oils here at Pure Jeevan, even if your oils are only meant for topical applications. Your skin is a highly absorbent system. You want to receive the benefits of the true essence of the plant itself, not the true essence of a pesticide! Also, on a purely metaphysical level, an organic oils are also clearly superior to those from a "conventionally" grown source. 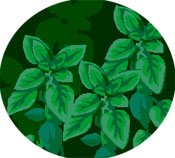 Okay, so let's review some of the properties of oregano, all of which are intensified in the essential oil. Oregano really has all of the "anti" properties covered! It's antiseptic, antioxidant, antimicrobial, and antifungal. Because of all of these properties, it's truly "good for what ails ya," having been historically brought to bear in the treatments of colds, flu, gas, upset stomach, cuts and scrapes? (topically), and many other conditions.

Okay, so who's got a great recipe using oregano If so, feel free to share in the comments, or consider doing a Makin' It Monday video for us to feature here. (See here for details on that.)? Actually, I just remembered that our Italian Zuppa recipe contains a good amount of oregano (as in real oregano, not oregano oil!). Definitely check that out!

I put one drop on my toothbrush daily. i became accustomed to it quickly. i've also heard to put one drop under your tonge, but that feels very strong all at once.

Wow, that's pretty hard-core! What benefits have you realized from that practice?

LOL! In juice sounds uber-nasty! Maybe in some raw gaspacho or something Italian-ish? Let us know if it was burning later.... LOL! :)

I take 1 - 5 drops under my tongue every day for the past 10 yrs then drink a glass of water. Best natural antibiotic in the world!! Wendy should be taking it for the lyme disease. You get used to it real fast.It will kill any parasites you have plus heal every thing from arthritis to the swine flu!!
I found the best oregano oil from 'North American Herb and Spice Co. P-73'

Ummmm, no problems to report. LOL

I've heard some others say this, too. I'm actually surprised at how many people take this. I thought it was lesser known!

Wow! That's over 10,000 drops of oregano oil. (Yes, I did the math.) Holy mackarel, I think you should get a prize or something!!! I've heard some others say that they really get used to it quickly. Will pass that along to Wendi, although I'm not sure if she'd be up for starting it now with all of the other specialized herbs she's taking for the Lyme. Will look into that brand. Thanks!

Hello Jim,
�� I heard this on a radio health show.� A woman was having problems with dizziness and he thought, if it was an infection of some sort, this practice would help.� i have trouble with dizziness sometimes b/c of allergies i think (sinus infection maybe).� anyway i did do this for a while and i have been better than usual thru the allergy seasons.� i was about to start the practice again because of H1N1.
�� i am glad you wrote me back.� i have been reading pure jeevan regularily for about a year.� but i'm not overly computer saavy so i've never commented before.� however, i think alot about Wendy and the lime disease and the other day an idea came to me.� i think oprah did this before.� anyway, thru your blog, enlist people for, lets say 30 days, at a certain time everyday (conducive to as many time zones as possible), to stop and spend a minute sending healing energy to Wendy.� i think its called long distance healing and i believe many people would want to help and it would give us a way to concentrate our thoughts and prayers and healing energy for her.�
�� but either way, i wish you two the best.� and thanks for your blog i enjoy it very much and it is very helpful as i move closer and closer to a "100%" raw diet.� yours truly, Denise.
��

yes try it under your tongue, there are no taste buds there, its alot easier on your pallet and it doesnt burn

It seems that the best thing you could have put the one drop of oregano oil in would be a glass of fresh tomato juice, since it is well known that oregano an tomatoes taste good together.