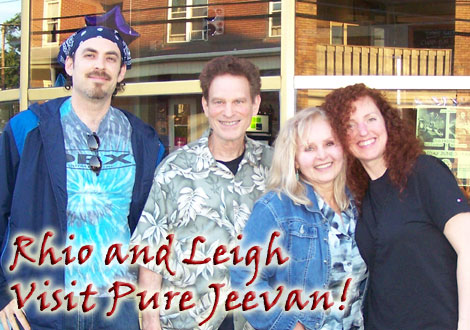 Jim here... We had a whirlwind weekend last weekend when the uber-talented couple Rhio and Leigh came to Pittsburgh for a three-day visit. As many of you probably know, Rhio is a well-known pioneer of the raw food movement, having written one of the definitive books on raw foods, Hooked on Raw. She's also the host of a popular Internet radio show of the same name, for which Leigh serves as primary engineer and co-host. Both have extensive backgrounds in music, as well, which is fitting for such a colorful, vibrant couple.

Saturday, Rhio gave a two-part presentation to a capacity crowd at a local coffee shop / art gallery.Part One was a demonstration on making raw dairy-free yogurt using almonds (a technique demonstrated, I believe, on her new DVD, "What's NOT Cookin' in Rhio's Kitchen " -- available soon on her web site at www.rawfoodinfo.com). According to the yogurt eaters in the crowd (of which I'm not one -- never went in for much dairy), the recipe mimics yogurt perfectly! So, if you're a raw foodie who misses dairy yogurt, you're definitely going to want to connect wth Rhio to learn the technique.

Part Two focused on the ever-growing threat reality of a world increasingly overrun with Genetically Modified foods, a subject many raw foodies are passionate about (if by passionate you mean passionately against it, of course). Rhio laid out her case against GMO foods with eloquence and clarity, explaining the scientific principles behind it and outlining numerous scenarios that, frankly, were highly troubling.

For example, she desceibed the so-called "terminator" gene that was developed to prevent plants from going to seed -- tantamount, says Rhio, to asking a plant to commit suicide. One need not be much of a pessimist to easily envision a worst-case scenario happening related to some unforseen "accident" with such technology. What would happen if, for example, this gene spread to every known plant on the Earth (no doubt in spite of the biotechnology industry's assurances that nothing like that could ever possibly go wrong)? My opinion:? If scientists want to live on Mars, they should build rockets and travel there in person; let's not turn Earth into a rocky vegetation-free zone!

BUT... I have to add that, although much of this news was rather gloomy, Rhio ended her talk by focusing on many positive developments in the word. One particularly inspirational example was the story of Ecuador and its new constitution that actually gives rights to nature. Here's a link to a story on that topic from the L.A. Times. A snippet from that piece:

Not only would the new constitution give nature the right to "exist, persist, maintain and regenerate its vital cycles, structure, functions and its processes in evolution," but if it is approved, communities, elected officials and even individuals would have legal standing to defend the rights of nature.

WOW! :-)? This is surely another great reason that a number of raw foodists are looking to Ecuador to start a new life of year-round eco-aware existence.

By the way, I'd taken videos of the presentations described above, but the sound quality just didn't turn out as well as I'd hoped. Instead, we'll be posting tomorrow and Thursday special video interviews we did with Rhio and Leigh. (Tomorrow, Wendi will interview Rhio, Thursday I'll interview Leigh.) So, be sure to return for both of those, as they're REALLY interesting interviews.

For more information on Rhio, see:

I really enjoyed Rhio's talk. I just put up some yogurt tonight - I loved her yogurt, but I love fermented foods! I used Brazil nuts instead of almonds, so we'll see how it turns out. Thanks for the summary...I'm looking forward to the interviews!
~ Melissa