For today's Makin' It Monday feature, we'd like to present "Salsa Campechano." We'll have to admit, though, that we do not speak Spanish. So, we have to give some credit to Google's online language translator. When we went to name this recipe, Wendi suggested that this is a "manly" dish (since I created it). However, we didn't find the perfect Spanish word to fit the recipe.Then, considering the walnuts in the recipe, Wendi suggested that perhaps "hearty" was a better adjective. Google returned the Spanish word campechano for this, and we immediately thought: Yes!, that sounds just perfect!? So, here's an amazing recipe for you. It's a hearty salsa recipe, but I actually like to eat it as a soup. 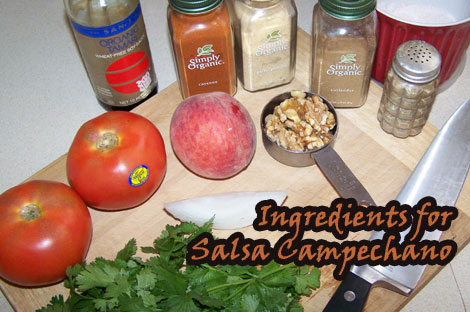 This is an easy recipe. To get started, all you'll need are:

Just toss everything into a food processor and pulse many times until the desired consistency is reached. It's important to pulse rather than to just hit the "on" button and wait. Pulsing leaves a chunkier texture and also seems to allow more control as you process your food. Below is a picture of how my Salsa Campechano turned out today. 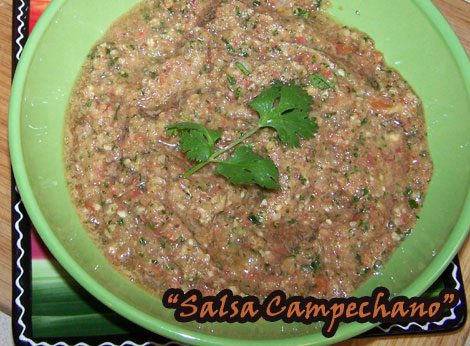 As you can see, it turned out rather thick (which is fine). I think it was thicker because my tomatoes were more firm than other times I've made this. Either way (thicker, or soupier) is delicioso. As I said, this can be served either as a salsa / condiment? or as a highly refreshing soup. (I prefer it as a soup, and promptly enjoyed the entire bowl!) Enjoy!

That look so good! Thanks for sharing it! I am going to make it this week. (Without cilantro, because cilantro and I are not friends. A handful of parsley works for me!)

It's SOOOO good! I made it tonight for dinner, again! -Jim

This sounds wonderful. Is there any way to get the nutritional counts on this? I am diabetic so would like to know carbs to be able to include in my daily food log....raw is helping me so much.

Wow, I'm glad to hear that raw is helping with your diabetes. Have you read all of the special coverage we've done here on raw & diabetes? Great stuff! Anyway, I've heard many people reference a site called FitDay for this sort of thing (free site for tracking calories & other nutritional analysis). Haven't tried it myself, but I'd check that out as a first step. -Jim